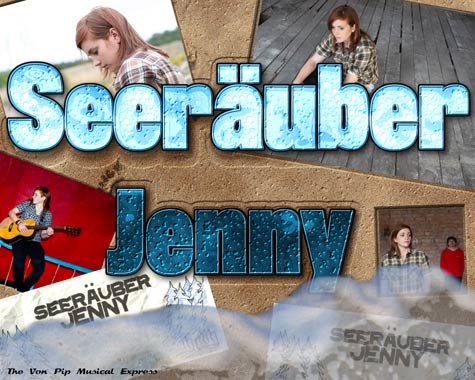 ‘Push it Away’/ ‘Waste of Time’ By Seerauber Jenny.

With my impending unemployment about to explode all over me like a shit filled water balloon, my email inbox has been the subject of intense scrutiny of late as I surf the veritable tsunami of job offers and business proposals. To be quite honest the only petition of any real substance thus far has been from a nice chap called Mr. Zongo Ali from Ouagadougou, Burkina Faso. It seems the poor fellow is in a bit of a financial pickle, however his business proposition, although unusual, may have legs, we shall see.  As a blogger you do get many unexpected treats popping up  in your  in- box, threats of physical violence, offers of physical love (well not really), drunken, hate filled, misanthropic communiqués from citizen journalism’s staunchest supporter,  Andrew Marr, and obviously plenty of music. Sometimes it’s great, sometimes it’s not so great and sometimes you come across bands that knock you sideways.  This is exactly what happened when I received an email about Seeräuber Jenny.

The band is made up of the nucleus of Fran Barker from Brighton and Neil Claxton from Manchester who was also one half of cult electronic remix duo Mint Royale.  Seeräuber Jenny’s début single ‘Push It Away’ is an intense, passionate slice of pop and  demonstrates just why songwriters who perform their own songs will always bring something more to the table in terms of emotional depth than those vapid, soulless little meat puppets who are told what to sing, what to wear and indeed what to feel.  Fran’s vocals are full of genuine sentiment because she has a bona fide connection to the song, and that, to me at least, is what music is all about, the ability to conjure up atmospheres and convey emotion.  If I want to be entertained I go to the circus, if I want to be moved and inspired I listen to the kind of music that Seeräuber Jenny produce, a dark, glittering  combination of despair, isolation, beauty, strength and hope ( ie/ all the good stuff!)  which comes from a very real place.  Suitably impressed we spoke to Fran, and talked about music, Radiohead, public speaking  and death!

VP: First thing I have to ask is, your name’s Fran so where did the name “Seeräuber Jenny” come from, does it have a special meaning for you ?


FRAN: Well, it’s a song in an old Marxist opera where it’s warned that a horde of pirates will invade a town and destroy it. It also inspired one of my favourite stories about a shipwrecked man trying to return to his family and being driven insane in the process. Basically it just had a really strong, light hearted and positive feel to it that I felt was reflected in the type of music we make.


VP:  How did you meet up and start performing together?

FRAN: Well, I sent Neil a parcel with a demo to listen to and a toy soldier to play with. He then got back to me saying that he was interested in the songs and would like to have a go at adding a lot of things he felt were missing, I said go for it and he sent me a song back with a lot of things that it turns out were missing. It’s a pretty perfect set up really.

VP: You’ve just released your debut single “‘Push It Away’ . What are the themes contained within the song?

FRAN: Well, I guess all the usual themes, heartbreak etc. but it’s mostly about the basic instinct of comparing like to like which we do all the time I guess. I also like to think it sounds kind of wintry.

VP:  What are your plans for the rest of the year, is an album in the offing?

FRAN: I think we’re going to go for another single around Christmas time, not a Christmas single, though I have always wanted to release one. Then I’ll think we’ll go for releasing the album next year, which sounds really nonchalant doesn’t it? I guess we are going for a softly, softly ‘if you build it they will come’ approach, failing that we are working on a cover of JLS‘s ‘Beat Again‘ and Neil is practising his back flips.
VP:  What sort of music has influenced you? Is there one band that you could say , ‘They were the band that made me want to start writing music ?

FRAN: I guess I can’t talk for Neil but personally I’ve been very much influenced by Shoegaze and Grunge and Folk, bands like My Bloody Valentine and Sonic Youth or Slowdive but also Guthrie and Dylan. I think the ‘one band’ would have to be Radiohead but then they are pretty much the best band in the world so it sort of goes without saying. That’s not to say I think the music we make is like that but I think it has the same sort of structure and ethic.

FRAN: Good and Bad equally. There seems to be as much crap as ever floating in the rivers of 2010 which is kind of comforting.

VP: What song do you wish you had written and why?

FRAN: Fleet Foxes ‘White Winter Hymnal’ because it’s practically perfect and the video is really cool and their beards are immense. Also Beach Boys ‘I Just Wasn’t Made For These Times’ because it’s also perfect, I really like that sort of naive sound.

VP: Do you get nervous performing, given that surveys have indicated that Britain’s fear performing public speaking/performing ahead of death!

FRAN :Is that true?

VP: It is indeed,  Jerry Seinfeld put it into perspective best when he said,  “According to most studies, people’s number one fear is public speaking. Number two is death. Death is number two!! Does that sound right? This means to the average person, if you go to a funeral, you’re better off in the casket than doing the eulogy!!”

FRAN: That’s pretty cool! ;)  But yes I get very nervous, nervous that I might make a massive prick of myself. Luckily after successively making a prick of myself at previous gigs my nervousness has dissipated to just a slight fear. I like that fear though, when it’s not there I worry something could be wrong with me.

VP:   You’re based in  Brighton, with Neil some 250 miles away in Manchester,  how does the creative process work ?

FRAN:  It’s all about the Internet for us. Me or Neil will write something then send it to each other then we add something of our own and send it back. We just keep on like that until we’re both happy.

VP:  Five words to describe your music would be …

“Push It Away” By Seeräuber Jenny

0 thoughts on “When Push Comes To Shove-Seeräuber Jenny Interview.”