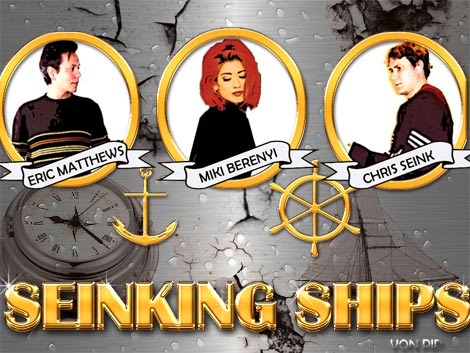 When the news surfaced that Lush’s Miki Berenyi was guesting on Eric Matthews and Christopher Seinks project, “Seinking Ships”, there was much rejoicing in the VPME office. Since Lush split Miki’s appearances have been few and far between, partly due to her disillusionment with the record industry ( Miki: “I’m like Les McQueen in The League of Gentlemen – always handing out my old records and warning my workmates about the pitfalls of the music industry – “It’s a shit business” – that’s my catchphrase”) and also due to the demands of work and family.

So what drew Miki to this project ?  “ Eric just asked me, I really liked his stuff in a funny way it reminded me of Emma’s songs. I know they’re completely different really, but there’s something in the weird harmonies and the slight jazziness—and they’re really bloody hard to sing!”

The album “Museum Quality Capture” has been  recorded and is “in the lab” and will hopefully be released in 2009, in the meantime Eric Matthews has  allowed us to post an exclusive  album track  featuring Miki and also shares his ideas behind the song.

“We Will Drink Wine” By Seinking Ships (Ft. Miki Berenyi)

ERIC MATTHEWS : This is a beautiful song that I wrote with Christopher for Miki to sing.   I wrote a little story about lovers who live in separate places and are making plans be together for the first time-  that thing about the anticipatory fantasy that can build up in a mind (or minds) of would-be lovers before touching for the first time.   For me it was a strangely creative romantic moment where I really tried to put myself in that situation. I thought it was something that Miki could connect with and I think she did.   And sure enough, we talked about it and she sang it like a beautiful broken bird, just what was needed!  When I was writing the vocal parts, and the lyrics, I realized that something was happening where it actually began to feel like I was writing a love letter from me to Miki.  Not because I have some deep romantic feelings for her, no.  She and I have never met.   Instead, it was this act of creating something so special, that I was going to hand to a wonderful girl like her, a song that I felt so very close to, and moved by.   That starts to sound creepy but really, those notes, and those words created a real mood where I would like to believe that the more sensitive listeners would hear this song and really begin to feel the yearning of the singer, if not also the writer.

“I remember the first time Moose and I were sat listening to Eric’s demo of the song with a lyric sheet and Moose raised an eyebrow at me and laughed, “ Does this bloke think he’s going to get his leg over?” And I plucked another grey hair from my fringe, grabbed two handfuls of belly gut and croaked through the fag hanging off my lip, “well, he’s in for a bloody shock if that’s what he’s after!”

Yeah, it is a nice song. High. I remember there were some very high bits.

Please note: I am totally rubbish at talking about music unless I put my English Lit BA head on and I’m currently in the middle of filling out my tax return so that’s not going to happen.”

Interview with Eric Miki and Chris

Light From A Dead Star