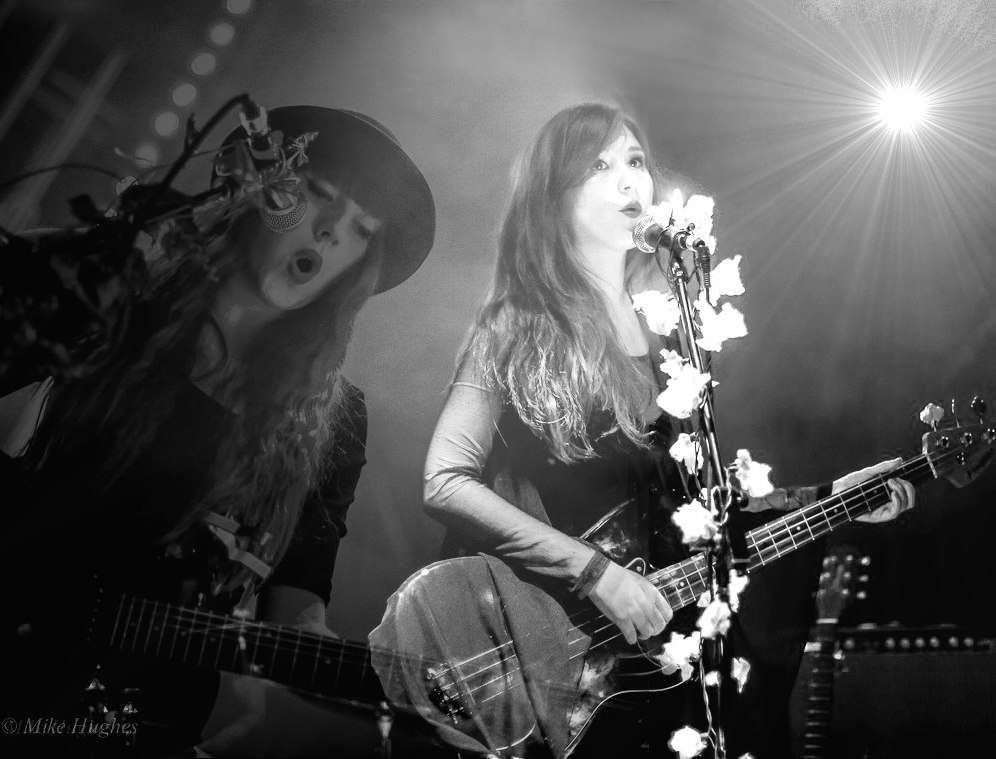 Last time we spoke to Merseyside based band Bird they were a five piece and had just released their excellent debut EP “Phantoms.”  Now some nine months later they re-emerge as a three piece, with a new EP, the equally compelling “Shadows.”  Now consisting of original members Adele Emmas (Guitar/Vocals) and Alexis Samata (drums) plus the addition of Sian Williams (Guitar/Vocals) the decision to strip down to a three piece wasn’t prompted by the recession, it had much more to do with the creative direction of the band.  Fans of “Phantoms” may not notice a massive change sonically, they haven’t for example started to drop weapons grade MDMA and gone techno or decided to embrace grime, but maybe there is a new found confidence, a renewed sense of vigour because “Shadows” sounds like a very confident statement of intent, a reassertion of an artistic vision.  Bird once again combine the hauntingly beautiful with the sinister, and stand-out track on the EP ‘I Am The Mountain’ showcases the bands new dynamic, as Adele’s vocal backed by another female for the first time, lends it an even more celestial vibe, infusing it with a spectral, otherworldly quality.  The song is reprised in the EP’s outro making it sound like Catherine Earnshaw’s eerie spectre wandering the desolate Yorkshire Moors, which is perfectly in keeping with Adele’s love of Kate Bush.

We caught up again over two drunken weekends at the FestEVOL in Liverpool at which Bird also performed an astonishing cover of the Bauhaus classic ‘Bela Lugosi’s Dead’ (he is indeed and has been for some time, a fact even the harshest ATOS  Work Capability Assessment may well concur with  – ‘However we do need to establish just precisely how dead Mr Lugosi is and investigate whether he may find the  ‘Pathways to Work’ scheme helpful ! )

VP: Hello Adele, So Bird are now a three piece band after being a five piece. Was it a case of stripping things back and getting back to basics? Do you feel this is a bit like a re-launch, Bird mark 2 …

Adéle: Hey Andy, yes we do feel like it’s a re-launch, were basically starting all over again. In the old band I found myself in a situation where things just weren’t flowing properly or working creatively any more, it was no one’s fault but it’s was all becoming a bit intense and stressful and that’s when I knew it was the end of the road.  It was very sad and making the decision to go down to a three piece was hard, I was scared about taking the leap but I knew it was the right thing to do. Musically things needed to be stripped back, instrumentation just needed to be placed carefully when necessary, and that’s exactly what we’ve done.
VP:Ssince we last chatted Sian’s joined and you said you hit it off straight away sharing the same love of music, was it nice to have a bit of sisterly company after being surrounded by blokes?

Adéle: Yes, I’d gotten so used to being surrounded by blokes that it was nice to have some female company!  Sian and I always joke saying we think we have the same brain; we like the same music and see the same thing creatively.  We also both have a surreal, silly sense of humour so we all laugh a lot which is good and healthy for us.  It’s a lovely situation to be in really, Lexi (drums) has been a best friend of mine for years and now Sian’s become a good friend too so it’s nice to have that surrounding you, you know they’ve got your back.

VP:  Are you looking to add any new sounds to your current set up?  A bit of spooky, otherworldly synth action for example?

Adéle: We were looking for a new bass/synth player but we really like the dynamic of the three of us so we’re still un decided. Synth would be brilliant for atmospherics but it’d have to be 100% the right person.  Sometimes I just wish we could sprout an extra pair arms! I’d also love to have a full time violin player but they’re always so in demand that it’s hard for them to stick to just one band.  When we start making some money, we really want to start using other unusual instruments too, like an auto harp and a marxophone etc.
VP: You’ve got a new Ep coming out, again it’s spooky dark and ethereal mixing light and shade.  Would you call it a concept Ep what themes are your exploring this time around?

Adéle: Yes, I’d call it a concept EP, it starts off with an intro then takes you on a journey with the three main tracks and ends with an outro that sums up everything that you’ve just heard. At the time I wrote the EP I was watching lots of old black and white films such as Wings Of Desire and The Night Of the Hunter so they inspired some of the writing. I was also reading The Bloody Chamber by Angela Carter at the time and that’s full of sinister and spooky fairy tales. The running theme throughout the EP is about being lost in the darkness and trying to turn it all around.

VP:  I’ve seen the rather disturbing video trailer for Shadows, looks like M.R James meets the ‘Hounds of Love’ where are the clips from? Are visuals very important to you to help create an overall atmosphere?

Adéle: Visuals are hugely important yes, it helps to show people the world that your trying to create. The clips are from non copy right film archives on the internet so I just spend hours looking through them, trying to find the imagery that resonates mostly with the music so it’s creates an atmosphere for the viewer/listener.  I’m a big film buff too so maybe that’s why it’s so important to me.

VP: What plans have you got for the EP launch

Adéle: We want to make it as big a show as possible, we’ve got some fantastic support acts confirmed so far (The Sand Band, Beach Skulls) and were going to turn the Kazimier in to our own magical Bird universe!  Sian’s just ordered a beautiful old Victorian dress to wear on stage so we’ll definitely be going all out. It is going to be a brilliant night and we’re really excited for it all.
VP:  If you had a huge budget what sort of a stage set up would you have, I’m sensing fairy lights, skulls, Edgar Allan Poe meets Enid Blyton.

Adéle: This is the kind of thing I dream about!  I’d have big vintage bird cages, fairy lights, drapes, taxidermy, a huge projector with spooky black and white imagery, old fashioned lamps scattered everywhere and a huge back drop with the moon on it.  I would also hire some backing singers and a huge string section.

VP:  Last year you went down to Madia Vale and Abbey Road. What was that experience like?

Adéle: It was great yeah, I remember standing outside Abbey Road thinking that Pink Floyd, Kate Bush and so many other influential artists that I love had recorded there. Everyone was really nice and friendly too and I left feeling very inspired.

VP: We seem to live in an era in which the arts are seen as unimportant by a government obsessed with economic growth.  Indeed there is has been much talk of musicians not getting paid for performing at the Olympics (not the opening ceremony but all over various venues during the 3 weeks See Here) VP: Do you think there’s a worrying trend toward the creative community an attitude that you should perform/work purely for the exposure.

Adéle: The Olympics is good exposure and if there’s people that are cool with playing and not getting paid for it then that’s up to them, some might see it as an opportunity that money can’t buy.  However, every other professional working for the Olympics will be getting paid, so are we not viewed as professionals?  I just feel like it’s an insult, like it’s viewed that we should be grateful to have been given such an opportunity by people that feel they’re inferior to us. I think it’s terrible if you play somewhere and they expect not pay you, or sometimes you feel guilty to even ask how much they do pay which is ridiculous.  It’s a hard slog, you’re basically running your own business and it’s a full time job, in fact you never clock off, so why should we not be paid just like everyone else?

VP: The five most over used words at a Bird rehearsal would be ….