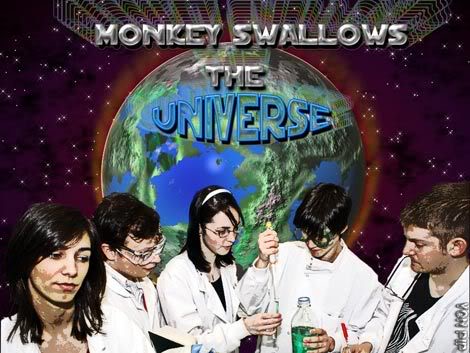 Not all bands from Sheffield have a Simeon derived moniker, those that do however, are not all noisy little urchins , take Monkey Swallows the Universe for example with their acoustic indie pop. It’s intelligent, its well crafted and its all very lovely and rather moving with songs that cover the whole emotional gamut, love, jealousy, pirates,apathy, imaginary friends, and death ! Their bittersweet tunes have drawn comparisons with the likes of Belle & Sebastian, Camera Obscura and Mazzy Star. The more you listen to them the more you release what wonderful songs they write ,that this is music from the heart by real people and this is music that matters.

They have been described as as “something special” (Stylus Magazine), “big big news” (Rough Trade), “boss” (Richard Hawley)”Capable of haunting, tear-prickling acoustic beauty…more than worthy of any – and everyone’s respect and attention.” (Drowned In Sound)

Originally a two piece with founding members Nat Johnson and Kev Gori the band expanded in 2005 to feature Catherine Tully on violin, Andy George on cello & Rob Dean on drums.

In 2006 the band released their debut album ‘The Bright Carvings’, with “Thee Sheffield Phonographic Corporation” , their latest critically acclaimed album “The Casket Letters ” released on Loose records, is out now and to quote the guardian “If they don’t get some sort of mass media coverage and fellatio for this album it could be a good reason to set fire to your passport and move to Sweden.” I would have to concur in the strongest possible terms , its a wonderful album and really should be in any self respecting music fans collection . We had a little natter with this exceptional young band……

VP: How did the current line up come together ?

Nat: “We met Cate, Rob and Andy through the same bunch of friends that had forced me and Kev to play gigs in the first place!”

VP: MSTU ? Isn’t that the name of an episode from the old and reassuringly bonkers Japanese show “Monkey”? Are you fans ? Have you seen Albarn’s Operas based on the legend/TV Show ?

Nat:” Kev and I are fans – we were watching it when forming the band. We think Albarn owes us free tickets to his show”

VP: Your latest album “The Casket Letters” has just been released did you find recording it easier than the first album “The Bright Carvings”

Rob: “It was very similar actually, both were recorded in a bit of a hurry although the actual recording time was spread out a bit more this time. There’s a lot more instrumentation going on on this album, the first one was basically Nat & Kev’s guitars then little bits the rest of us have added (Cate, Andy and I had not been in the band for very long at that point), while the new record has a much more ‘full band’ sound. The recording was all quite straightforward though, no major disagreements!”

Andy: “It was recorded piece by piece a few songs at a time and then fitted painstakingly together at the end. The instrumentation was more comprehensive this time and therefore it was often more complex to record although we had more experience after the first album and Alan Smyth at 2fly had worked with us before and so knew what to expect. It’s always enjoyable playing around in the studio!”

VP: You have been called “”Sheffield’s loveliest band” and your sound has been called “ravishing” , how would you describe it ?

VP: What or whom take your fancy from the current music scene?

VP: If music is the food of love who would you say are the indigestion ?

VP: Aren’t two of you qualified primary school teachers ? What do you teach , any plans for Jack Black “School of Rock ” type lessons?

Cate: “Yes, I’m a primary school teacher and although it’d be fun to do a Jack Black type lesson, there isn’t much chance during the school day as there is so much to cover already. Maybe one day though…”
Andy: “Yes – Primary so a bit of everything. I use our music in lessons sometimes but it’s pretty hard to teach the cello to 30 kids at the same time!”

VP: Reality TV ? a great way to spend a night in or the televisual equivalent of removing your brains via your ears with a knitting needle ?

Cate: “Against, what’s the point of writing ‘woz’? It has the same number of letters as the proper spelling. Get it right. ”
Rob: “Absolutely against. You don’t even need it in texts anymore cos of predictive text.”
Andy: “4 but not in the classroom!”

VP: Highlights of your time together thus far ?

VP: What have been your favourite films of the year ?

VP: Pick five of the most ridiculous words in the English language (eg. Johnny Borrell is a genius)

Andy: “Iraq is better off now” “Science” By Monkey Swallows The Universe