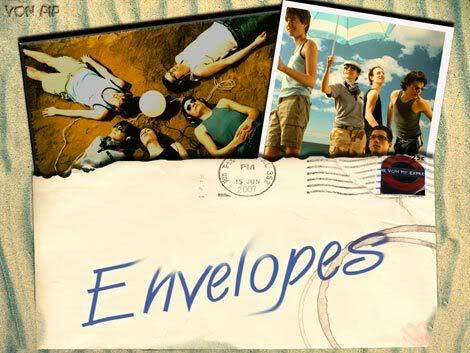 Swedish group Envelopes make a thrillingly raucous, off kilter noise. Part Pixies part Hives, part Talking Heads they take inspiration from their influences and put their own “stamp” on their sound. Their pop/punk guitars and shimmering keyboard riffs will have you pogoing with delight , whilst Henrik Orrlings vocals may well recall David Byrne at his most barkingly mad (which was of course when he was at his best.)

There’s very little chance of you listening to the Envelopes and remaining “stationery” , they really are a “first class” band . Whichever way you look at it, Envelopes have it licked! ( Note I resisted all temptation to make any puns regarding envelopes, office supplies or the postal service. I’m rather proud of my considerable restraint !) Henrick popped into VP Towers for a chat and some lingenberry juice….

VP: How did you all meet what’s the story ?

Henrik: They are all my friends from the begining. It was I that brought them together. None of them knew each other, but this band gradually aggregated and when it was time to have a drummer or a bass player I asked some old friends who I thought would be good. Filip and I share best friends.Audrey and I met at a party. At first if was a holiday project. Then it became more serious as a record company got involved.

VP: Talk us through what you have released thus far and what future plans you have in terms of touring, single and album releases etc

Henrik: We have released one album , “Demon” , some 7 inches from that one, one seperate single, “Freejazz”, and more 7 inches from what is gonna be the next album. That album is called “Here Comes The Wind” and its out in January. We don’t make too many plans ‘cos they just keep changing all the time. We might tour if the weather is fine. We will try to be more and more hi fi as the years pass.

VP: Who would you describe as your major musical influences?

VP:What is it about Sweden that seems to enable you to consistently produce such great singers/bands?

Henrik: The same that enables us to produce excellent poker players??

VP: Tell us about any bands within the current scene you admire

Henrik: Well, i think Late of the Pier is a really interesting band. Very funny song structures and a lot of ideas. I have always been a fan of the Smiths as well.

VP: In your opinions what are the five greatest albums ever ?

VP: What’s the best and indeed the worst movie you have ever sat through?

VP: When you’re not Envelopes what do you do ?

Henrik: I’m moving to Berlin, Fredrik is working at the docks, Audrey is dubbing movies and computer games, Filip is looking for a job and Uffe is a carpenter.

VP: Sum up life in The Envelopes in five words beginning with “R”

Henrik; You should pick another letter!!!
Links

Video
“Life On The Beach” By Envelopes