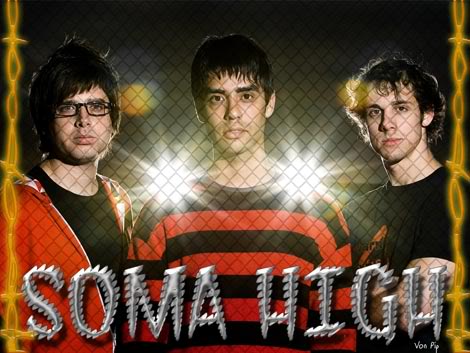 “End Of The Line” By Soma High.

Appearances can be deceiving, take south coast band Soma High, they look like a nice respectable bunch of lads, mums and dads would quietly nod their approval if their daughters brought them home to sleepy suburbia for a spot of tea and buns……But never judge a book by its cover, Soma High’s debut EP, “Lo Fat” is a different beast altogether, and is set to explode across the pop firmament sounding like some sort of 21st century synth thrash version of the Sex Pistols. Guitars slice through electro beats and soaring vocals create a huge wall of sound, frightening in its intensity yet utterly (butterly*) compelling. Opening track “Lo-Fat” has guitarist and vocalist Sean snarling the mantra “you can’t outsmart me, you’re a moron” with the same sort of passion and rage that John Lydon used to summon up before he became the acceptable face of  British butter* on TV.

Closing track “End Of  The Line” features Sean performing vocal aerobics, reminiscent of a younger, less narcissistic version of Matt Bellamy, as the band detonate a cannoncade of explosive beats and searing guitars, sounding like the three horsemen of a pop apocalypse. Bloc Party would love to sound like this; it’s relentless, imaginative and impossible to get out of your head, whilst it has the raw electro nu-rave energy of say, the Klaxons, but with much bigger bollocks….. But hey, never mind the bollocks, here’s Soma High (well, one third!)

VP:  Where did you all meet up ? How did the band come together?


SEAN: I met Leon through a friend whilst at school, I knew before he did that he’d make a great bassist…although I think he’d disagree!  Rob came a few years later.  For some reason I started chatting to him on myspace, don’t know why, don’t know how, but things just seemed to click when he came to the studio.

VP: How would you describe your music/ lyrics? How do you go about song writing?

SEAN: Everyone asks me this and I always give a different answer.  Some people say Indie rock, others electro rock or even new rave.  I think of us as all of the above with the heart of a punk band I know that sounds cheesy! lol).  I write about everything and everyone around me.  I usually write all songs on the piano, guitar or cubase, actually cubase is always involved! then I take them into practice and we work on them till we’re all happy.

VP: Do you all share similar tastes musically or do you think you all bring something a bit different to the mix? What are your influences?

SEAN: We all have our own personal tastes but some of the greats like The Beatles, T-Rex, Nirvana etc we always agree on.

VP: Sean, you packed in a degree course and started writing music, did your friends/family think you’d gone mad, or did they support you?

SEAN: Higher education always means dedication and I couldn’t commit to it.  I just wanted to concentrate on the band and writing music.  Some people still do not see it my way but that’s life.  It was my decision to make and I made it whether it’s right or wrong.

SEAN: 2008 was a building year, we had plenty of high profile gigs all round the country and also recorded our single and shot the video.   It was basically getting ready for 2009…it’s all about 2009.

SEAN: I think we’re gonna take it one step at a time and see how far this and the next single will take us.  I would love to say an album is in the pipeline though!!

SEAN: We played with Dan Le Sac vs. Scroobius Pip and we thought they were amazing same as Evil Nine…I hope they all get really big this year.

VP:  What has been your band highlights so far?

SEAN: Having 2 of the most beautiful girls in our video! Hehe.

VP:   Who would be your dream touring partners?

SEAN: So many bands.  I’d like our first big support tour to be with Bloc Party, We Are Scientists or Queens Of The Stone Age.  I really like their music.

VP:  Five things you do when you’re not making music?

SEAN:  Umm… I can’t speak for everyone but I do like eating, drinking, sleeping, socializing and facebook.