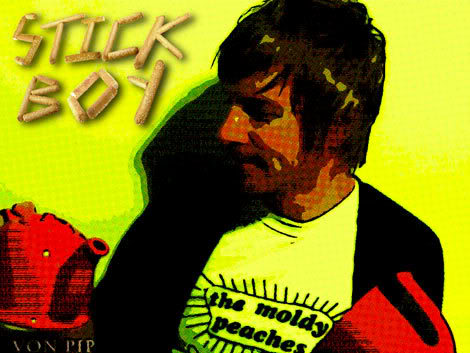 Are you sitting comfortably? Good, then I’ll begin “A simple boy made of sticks walked out into the forest one day to discover a little wooden instrument lying on the floor… after years of practice, this small piece of wood began making the most beautiful noises…..” and so was born “Stickboy” a Mancunian who is embarking on a one man musical adventure. He’s named after a character from Tim Burton ‘s Book “The Melancholy Death of Oyster Boy & Other Stories” who  features in the short poem“ Match Girl and Stickboy.” A cautionary tale regarding a boy of sticks, who falls for his perfect match, so to speak, only to be quite literally, consumed by the flames of desire…………as you do.

Stickboy has recently self released his first full length album “Under The Sleepy Moon” and has had one of his songs used for a national TV ad campaign in the UK, promoting the best way to cook up joints..….of New Zealand lamb, as well as having a song featured in US TV show “Gossip Girl.” On top of all that he’s released a number of limited edition EP’s through Piccadilly Records which sold out within seconds (well days!) and has  gained  the influential ears of Steve Lamacq, Tom Robinson and Marc Riley from BBC radio, which he stores on his bedside table in a large jar of formaldehyde.

Initially you might be seduced by the jaunty sound of some of Stickboy’s music, but delve a little deeper and you will note the wonderfully subtle nature of his lyrics.  Lines such as “I asked you about life/Oh why must we be? /You said I waste too much time on philosophy/you took out a book and pointed at clouds/and said would you rather be here or just floating around?” and continues “So I asked you about death/ asked where do we go?/Do we fall like the rain or melt like the snow ?” Genius !.…Simon Cowell can F**k right off, this is real music, not the woeful cruise ship cabaret which he smugly pimps to an increasingly accepting, anesthesised audience.

Stickboy is due to perform a live session on Marc Riley’s 6 music show in September, a month that will also see the release of his first single, a split release featuring two Stickboy songs and two songs by his enchanting friend Run Toto Run. Stickboy’s name is Craig, but he likes to be called Elmo, this is his story….

VP: So what’s the story? How did you evolve into Stickboy? Do you play all the instruments yourself?

STICKBOY: The story is simple… I started writing songs mainly because I love recording and couldn’t find enough people to record… so I just recorded myself… and over time I guess I just got better at writing. Now I love writing just as much as recording. After I had got a few songs together I played them to friends and people seemed to really like them…. so I bought some little 7″ blank CDs and put an EP out in a record shop in Manchester . They sold out really quickly and I was getting calls from labels and all sorts…. I didn’t really know what to do I put a band together and did some shows in Manchester which was really good fun. On my recordings I do play everything myself… I have tried writing with people in the past but it just doesn’t really work for me.

VP: The name comes from the Tim Burton poem “Stick Boy and Match Girl.” Are you a Burton fan? Why did the name resonate with you, did you see parallels in your own life with regard to Stickboy’s plight and his demise in the flames of lust etc?

STICKBOY : Ha-ha errmmm yeh something like that…. well I guess I just love the book and I do rather like Tim Burton, there is always a child-like feel to his films but with a more sinister undertone which I guess could also said about my music. Most of my songs on the surface sound really happy but lyrical they are usually a little darker….

VP: Where do you get your ideas for songs and how would you describe your sound?

STICKBOY: I find inspiration in many things, everyday things, emotions, simple things. If you just look properly you can notice a lot. My sound is hopefully the sound of all these things. It’s probably also a mixture of what I grew up with from folk, to 60’s pop, to rock and some country influences too.

VP: Being from Manchester, has its musical heritage been an influence on you?

STICKBOY: I get asked this a lot. I don’t think its stereotypical sound has influenced me that much. I don’t think you’d know I’m from Manchester just by listening to my music. It’s been amazing in terms of the support I have got from radio, record shops, magazines etc and the fact there is so much amazing talent in the city makes me want to try harder and harder.

VP: Did you see the recent “most musical city” arts council poll which saw Manchester come in  third behind. Liverpool and Sheffield (which also bizarrely saw Leicester, home of Showaddywaddy and Engelbert Humperdinck, 4th and London a lowly 8th!!) How did Manchester react to that?

STICKBOY: When Manchester opens the Oasis museum is 2020 then maybe we will be back up there, after all it’s all about tourism right? Actually I’m not too bothered about this poll….. I don’t think we need to compete against other cities, as long as there are still plenty of new and exciting bands out there then that’s fine by me.

VP: So you’ve self released your album “Under A Sleepy Moon.” Is it a difficult process? Or does the “net effect” make artists much less reliant on major labels?

STICKBOY: It wasn’t really difficult, expensive yes, but not difficult. I wrote and recorded the album in about 3 months, I recorded it all at home, designed the CD packaging and got it all printed nicely onto digipaks and made it available exclusively through Piccadilly records in Manchester (www.piccadillyrecords.com). The net has definitely helped, especially sites like myspace where I have a good fan base. The CD has been selling all around the world. I also have 3 albums on I-tunes that are also doing pretty well.

VP: Gigs? Any planned ? When you’re on stage is it just you or do you get chums in to assist with the live sound?

STICKBOY: Well I used to have a 4-piece band backing me when I played live and I loved it that way….. But people move on and become busy so for a while I’ve just been writing and recording and now is the time when I’m thinking of sorting out a new band. It’s quite a hard process though, not just finding people that can play well and want to play someone else’s songs but also finding people who you really get on with. I’ve been invited to do a couple of radio sessions. I’m hoping to sort a band out for one of them. It’s on Sept 4th so I best hurry up!

VP: What sort of music have you been listening to lately?

STICKBOY: I listen to a lot of music; I spend far too much money on it. Not digital music, no, no, I don’t like that. CD or vinyl for me. I like to have packaging and something I can just put in the CD player in the car. Last few albums I got Bon Iver, Fleet foxes….. I constantly have Dylan and Neil Young on the player too.

VP: You state on myspace that you’d like to be called Elmo after the Sesame Street character, but why Elmo? There is a school of thought that considers Elmo an egocentric furry ball of limelight stealing malice and that he has ruined Sesame Street , in the same way that Scrappy Do destroyed the whole ethos of “The Scooby Doo Show?” What do you have to say about that sir? ; )

STICKBOY: Hahaha! My surname is Edmondson, Craig Edmondson is boring, and Elmo Edmondson has a certain ring to it. Simple as that.

STICKBOY: Fills me with rage? People using unnecessarily complex words for no reason other than confusion……(VP: I agree, such behavior can lead to floccinaucinihilipilification) that aside….. People expecting music to be free…. I don’t understand that….. People don’t expect paintings or the cinema to be free but they do with music. I’m not really a big fan of the I-tunes way of getting music either…. people miss out on albums because they may have heard one song on the radio and just buy that one….. It’s like buying a 100 page book and only reading 10 pages of it. I do have my songs on I-tunes but only because its one of the only cost effective ways of making my music available worldwide. And happiness? Lying on the floor with candles, good music and a loved one.

“Blanket For The Lonely” (original live demo) By Stickboy

0 thoughts on “The Boy Most Likely To….Stickboy Interview”