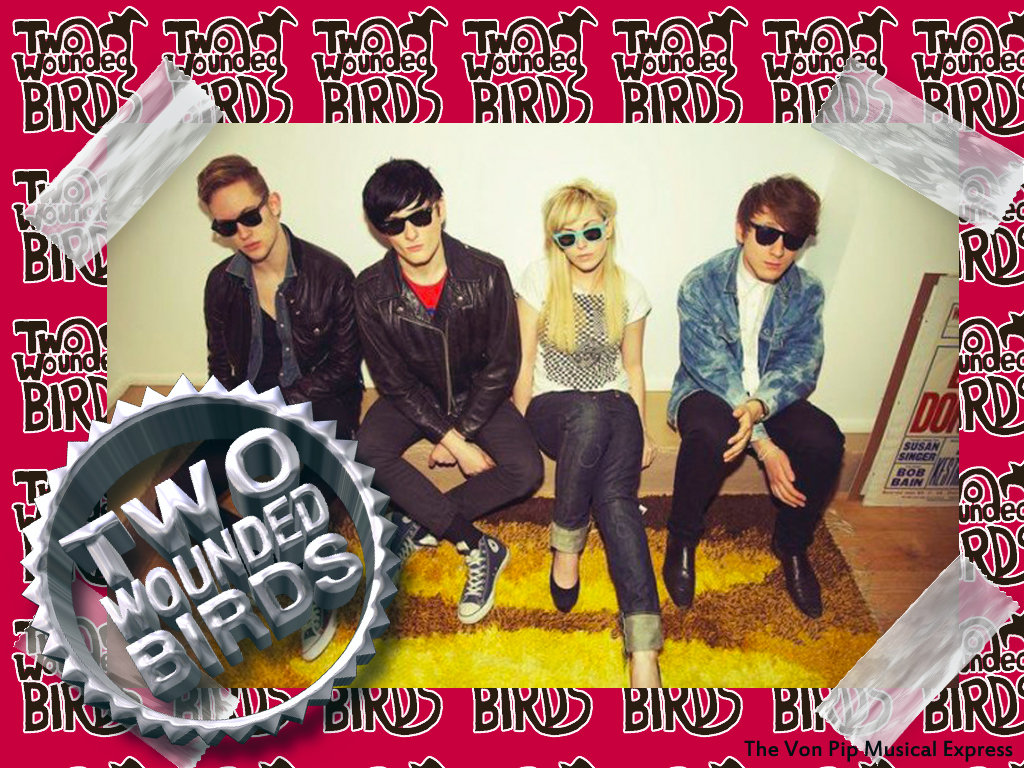 “Together Forever” By Two Wounded Birds.

One of the great things about Margate’s Two Wounded Birds is that they don’t piss about; there are no epic ten minute guitar solos, no ostentatious drum centerpieces and absolutely no narcissistic slap bass funkathons. Instead Two Wounded Birds just get the fuck on with it!   Take their previous single ‘ All We Wanna Do’  which clocks in at just over 1 minute and 50 seconds yet  manages to produce more excitement, more joie de vivrethan most ego-centric prog rockers produce over an entire career. They also have an educated ear for the perfect  pop melody, if you don’t believe us then ask  master  architect of harmonic pop, Beach Boys legend   Brian Wilson, or maybe  Seymour Stein who declared Two Wounded Birds  the ‘best band since The Ramones.’   Whatever the truth and we would caution against hyperbole (see, the Vaccines and Lana Del Ray who seem to have suffered rather nasty on line backlashes before even getting started) Two Wounded Birds play adrenaline fuelled, sonorous surf rock whilst throwing in some pretty darn clever lyrics too.

They are about as likely to record forty minute mini rock operas based on the lay lines surrounding Stone Henge  as we are to vote Tory or as Kaiser Chief butter ball Ricky Wilson is to say “Hmm, y’know what ? I think I’ll skip desert tonight” instead they concentrate on the elements that made rock n roll so visceral and exciting in the first place. The bands deep and entirely genuine love for the music they are influenced by shines through and they certainly can’t be accused of hitching a ride aboard any particular band wagons, they play from the heart and to coin a phrase – they ‘mean it, man!’

Their latest single ‘Together Forever’ is another fast paced example of what the band do best and had us  leaping around the kitchen like a salmon out of water fused with Ian Curtis. We therefore resolved to have a chat with the band, and grabbed TWB’s front man and songwriter Johnny Danger for a quick chat-which went something like this ….

VP :    Hello, there’s no denying your sound has been influenced by the heady  days of rock n roll combined with a head down and get on with it attitude of the Ramones.  When did you love of rock n roll begin?

JOHNNY: When I was very young I’d hear Beatles and Beach Boys records on round the house all the time, and you know what it’s like with those songs, they are so good and they just get stuck in your head. As soon as I got my first guitar, I was 9; I knew that all I wanted to do was make music. Everyone in the band has been exposed to music from an early age, which has been good for all of us.

VP: As a band do you all share the same influences or does someone nurse a secret love of “Euro Trance”

JOHNNY :We all like different things but it’s nothing to the extreme as to where one of us would be alienated by someone else’s taste.

VP: Your new single “ Together Forever” is another example of how to produce a great hook laden pop song with the minimum of fuss, I read that the way a song is recorded is as important to you as the  actual song ?

JOHNNY : Oh yeah its hugely important. Whats the point in writing a great song if you can’t record it properly? The sound of everything really important. Production is this whole other thing that needs a lot of focus. Like in Together Forever, the snare sound is quite deep; you know like a ‘boom, boom ‘ and that really aids the flow of the song.

VP: And is it true that Brian Wilson, of the Beach Boys, called up Johnny to complement him on his ‘great sense of melody? ’ That must have been a massive thrill?

JOHNNY: Yeah that was great. Brian’s the one person that I am in total awe of because of his genius, and for him to compliment the band is amazing. We were invited to his Royal Festival Hall shows recently, where he did the Gershwin album and then a load of Beach Boys songs.

VP: Given this seal of approval from Brian Wilson and  your no nonsense attitude to making music, what do you think makes for the perfect pop song, and which songs would you hold up as definite  examples of this.

JOHNNY :I think a good melody is the most important thing to me. If you haven’t got a tune you haven’t got anything. Examples? I’d say “All Summer Long” is one of Brian’s best songs. “Light My Fire” by The Doors is also amazing too, i love all those sections, i don’t think there is one definitive formula I just think when it’s right its right. I like those songs also when the first line or first words are the most memorable. Roy Orbison was great at that, “Love Hurts” and “Pretty Woman,” as soon as you hear those first words, it’s perfect.

VP: You’ve released a couple of EP’s singles, played the festival circuit , when can we expect an album ? Do you have an idea of which songs will be going on?

JOHNNY: We have been together since early 2010, and we want the album to come out about February I think. It’s done and it sounds great. Maybe one or two of the older songs will go on there but there is a lot of material people haven’t heard. There are certain songs we really like playing live, like “Night Patrol.” We have quite a lot of songs so when we play live there will be stuff from the album, singles and EP. A good selection.

VP: What’s Margate like for a young band? Is there much of a scene there?

JOHNNY :Its great for us. It’s nice having a beach on your doorstep. It’s a good place for writing- its home, comfortable. There are some bands around, but there are more metal bands round here, sadly. I find Margate inspiring.

VP: There’s been yet another band reunion in the last few weeks, what do you make of it all? Is it a great chance to see a band for those who weren’t there the first time, cynical money making exercise or something else again?

JOHNNY: They didn’t get their moment the first time round did they? I think it’s great. I would love to hear those songs, obviously it’s not the same as it was the first time around but only a fool would be nonchalant about it. If it gives people a chance to hear great songs then it’s great.

VP: This time next year what would you like to have of achieved?

JOHNNY: A great debut, some good shows, and by this time next year be working on the second record.

Together Forever, the new single from Two Wounded Bird is out October 31st.

“All We Wanna Do” By Two Wounded Birds.