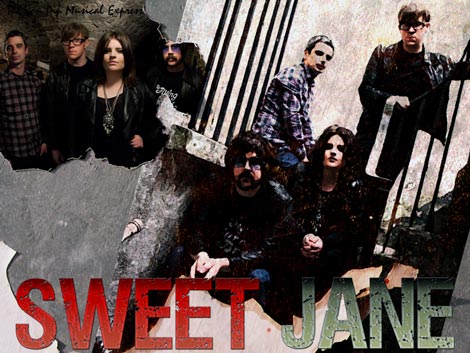 Sweet Jane believe in putting the swagger back into rock n roll, injecting new life into an indie music scene that seems swamped with trainee accountants enjoying a gap year and who know all about business plans but  have little real feeling for, or indeed knowledge  of,  the music that  they  cynically seek to produce. Ownership of a pair of skinny jeans and a twatty little hat may be voguish but passion not fashion is what really counts and personally I’d much rather judge a band on the content of their heart than the content of their wardrobe.

Sweet Jane wear their hearts on their collective sleeves and clearly understand what makes great rock n’ roll, they take their influences and  forge them on their own artistic anvil to produce something thrilling, visceral and very much the real deal. Hailing from Dublin they have only been together for a few years but in that short space of time have already supported some heavyweight acts, accompanying the likes of  The Kills, Glasvegas, A Place To Bury Strangers and Black Rebel Motorcycle Club and now with the release of their debut album it’s their turn to take centre stage.   If you’ve ever been held in the sway of bands like The Velvet Underground , The Jesus and Mary Chain , My Bloody Valentine, Ride or  60’s West Coast rock then we submit that you may well be smitten with their debut album ‘Sugar For My Soul’.  The album begins with the Mary Chain strut of ‘Bleed’ and ends with the Hendrixesque psychedelic space jam of  ‘Fade To My Heartbreak’ whilst in-between you will be hard pressed to detect a filler  on the entire album, in fact it would not be an overstatement to say that ‘Sugar For My Soul’ is  littered with songs that in any right thinking, artistically sophisticated society, would be regarded as classics. (Listen to ‘ Don’t Hold Your Head So Low’, ‘Texas Tears’ or ‘Black Eyes’ and tell me I’m wrong ;)  )

So whilst people of no discernable musical taste are soiling their trousers with excitement at the prospect of a Gary Barlow/Robbie Williams reunion (which let’s face it is about as exciting as Ken Barlow discussing  how to procure the perfect cardigan) we spoke to Sweet Jane’s Lydia .

VP: How did Sweet Jane get off the ground, I’ve read that the band originally started as a side project?

LYDIA: That’s true, Our bass player Ruairi introduced me to Danda at a party, and he asked if I’d like to sing on some songs he wrote, I guess when we saw other people get excited about the songs we thought it would be good to do a couple shows, we pretty much steam-rolled since then.

VP: Your rather excellent debut album ‘”Sugar For My Soul’ has just been released, after being delayed a few months. Was it frustrating having release dates put back, or do you think it worked in your favour   ?

LYDIA: It wasn’t really something that we worried about, or thought about. We planned to go into the studio to do the record by ourselves, during that period, we signed to Reekus, so we knew that they had to prepare their schedule, and we had to make sure that the record was the best it could be, when you sign contracts you get a certain confidence that your band is hopefully in it for the long haul, so we were fine waiting an extra couple months.

VP: Do you have a favorite album track?

LYDIA: ‘Don’t Hold Your Head So Low’ is special, the lyrics mean a lot to me, it’s sort of a self-help song, it was really emotional to record, we’ve never played it live yet either, I don’t think I would make it through the whole song. All of our songs are special to me, when I hear them, I go back to where they were wrote or what happened when we played it together for the first time, I guess the record is a story book for the last two years.

VP:  Which bands would you say have been the biggest influence on your songwriting and musical style?

LYDIA: It comes in two parts for me, what I’m influenced by isn’t really how I write. I don’t think in terms of songs I get influenced by other artists, Danda writes the majority of our music so it’s hard to talk about music influences without him here, he’s a really big country music fan though. Melody wise, the original pop stars like Ike & Tina and that whole Phil Spector sound is inspiring. In general I’m a big Brit-Pop fan, the Creation Records back-catalogue, Oasis being the Holy Grail y’know. I think though people and attitudes inspire me most.

VP:  What have been the most memorable moments thus far as being a member of Sweet Jane?

LYDIA: We’ve had a lot of great nights with this band, we’re easily pleased, a good rider and good company, getting to travel to places and have people know your band is pretty great. We’ve met some pretty cool people along the way, 3am in an attic singing ‘Wonderwall’ with Bonehead [The Vortex / Oasis] was a special one for me, sitting in a field in Sheffield with Mark Gardener from Ride, all bizarre amazing nights. Actually we just played the Oxygen Festival in Ireland this weekend and we were backstage with The Coral,  I’ve never realised how beautiful their lead singer was before, and that voice, I had a total fan-girl moment, but I can’t have many of those on tour, it’s pretty much a boys world y’know, crushes don’t go down to well [laughs]

VP:  What’s your opinion of the current music scene?  Any bands stand out ?

LYDIA: I’m not good at finding new bands to listen to, Ruairi, our bass player, is pretty much a music salmon of knowledge, so he knows what I like and sends me what he thinks I’ll like, I listen to a lot of the Rolling Stones, Ride, The Flying Burrito Brothers, The Byrds, and a lot of Black Sabbath. Actually I just got The Coral’s new record ‘Butterfly House’, its so beautiful, really great, y’know what, that band have never made a bad record, they really should be the biggest band in the UK, they deserve that!

VP: Do you think the ease with which people can download music has in some way devalued it?  Or has it democratized the whole process making it much easier to get your music ‘out there’.

LYDIA: What you have to remember is our band has only been around for a couple of years, so by the time we had started, music sales were already dropping, the dip has never affected us directly, I guess its the ‘what you don’t know won’t hurt you’ mentality. My stance on download music is simple, if that’s how kids are accessing music today, then who am I to say it’s wrong, the reason we work hard promoting our band and record is to get as many people to hear our music as possible, if it that means someone sending mp3s to friends then so be it.

VP: And in a similar vein, there’s been a lot of talk about file sharing damaging music sales, which is a contentious point, how do you see the future of music evolving?

LYDIA: I don’t know, I really don’t, I don’t file share and I don’t have an I-Tunes account, I buy records. So I don’t really know how to give this a good answer, I know that I can’t live off of our record sales digital or CD, and I never could, so I don’t really like to think about whether I could or not, there’s nothing that I can do about it. It doesn’t bother me; all I care about is making music, and seeing people at our shows.

VP:  Is there a pressure on bands to interact with fans, due to social networking sites?  Is it something you approve of and embrace?

LYDIA: I’m not sure, I don’t think our band has fans, I think we have people who like our music, I get uneasy with the term ‘fan’, I don’t want fans I want friends of our band, y’know? At the start, we managed all our own websites, but it wasn’t really an effort, it was just keeping everyone in the loop of what we were doing, now we have a label that looks after all the online stuff, all the press and PR.  Now that I know someone else will do the updating, the more I want to step away from the internet, the less time spent online the better y’know? I am a twitter fan though.