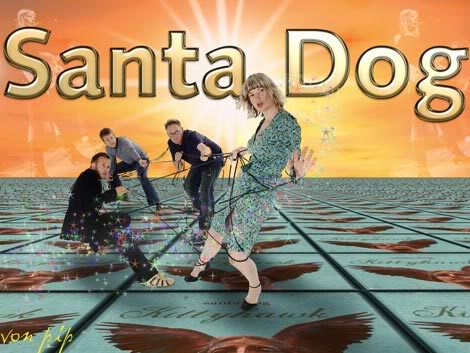 Bristol’s Santa Dog produce an accomplished, glistening sound with razor sharp guitar riffs and have in front person and lyricist, Rowena Dugdale a vocalist who conjures up the ghosts of Harriet Wheeler and Sonya Aurora Madan. It’s been said that Santa Dog sound a little like Britpop bands such as Echobelly and Sleeper crossed with the polished guitar jangle of the Smiths, whilst adding into the mix a liberal dash of the lyrical darkness of Throwing Muses tempered with the sweetness of The Sundays. I can concur with some of these comparisons to a degree, although Rowena certainly has a stronger and more tuneful voice than Kristen Hersh’s menacing growls and primal yelps, but I really can’t see the Sleeper connection(cue Elastica joke) After a good few listens of Santa Dog’s debut album “Kittyhawk” you`ll start to notice a darker side lurking just beneath the shimmering pop tunes . Dugdale’s lyrics are very much of the here and now, there are deft references to the paranoia of the modern world and how technology can enslave as much as it can liberate “computers die/and data lies /your iris pattern doesn’t match your eyes “- “Big Bang. ” Certainly some songs appear to contain oblique yet poetic Orwellian references that conjure up images of a society manipulated by the media and watched over by the state “I tune into the TV station /and get brainwashed with the rest of the nation/I’m so caught up with what I’m thinking/My minds full but my body’s aching” –“Belle De Jour.”

It’s an album that reveals more and more of its inner layers after repeated playing and Dugdale’s edgy lyrics and thematics make for an intense but hugely enjoyable experience. Tracks such as “Yeah, Yeah, Yeah ” “Big Bang” “Chemical” and “Belle De Jour” really should be on national radio on a regular basis instead of the usual misogynistic, booty obsessed self parodying cobblers that Hippty Hop has become. It defies logic that our national radio stations play this sort of guff, when we have intelligent, vibrant homegrown bands like Santa Dog just waiting to be discovered ….but I digress.

Rowena dropped by VP Towers to have a chat about weighty matters such as music/ technology/global warming and of course, has light entertainment in the UK ever recovered from the horrifying revelation that “Wee Jimmy Krankie” was actually not a cheeky Glaswegian school boy, but was in reality a grown woman of 60 !!! Forget the recent “Blue Peter Cat” scandals, this was the deception of a nation…….. It’s a twisted world…..

VP: How did the band get together?

Rowena (RD) : It’s been a jigsaw that has fitted together over time….me and Rob met over 10 years ago in Edinburgh, we met Martin in the pub a couple of years ago and bonded over discussing the finer merits of Prefab Sprout, and Steve (bass) is the newest addition, he joined this summer (luckily he likes the Sprout too).

VP: What have you released thus far Ms Rowena ?

VP : Any up coming live performances?

VP : How did you go about getting your excellent album “Kittyhawk” released ?

RD: Fortuitously, Japanese label Quince emailed us just as we were scratching our heads about what to release next, whether to do a single or another EP. Their backing gave us the confidence to launch into recording our debut album. They gave it full release in Japan, which was exciting for us, it’s available over here as import.

VP: What’s the Bristol music scene like at present ? Any bands you’d recommend?

RD: I’m a big fan of the Bristol scene, there’s a lot going on, but in true Bristol style a lot of it is under the radar. Countryside are one of our favourites, along with Safetyword, Babel, You and the Atom Bomb, Seagull Strange and the Wraiths.

VP: And the music scene in general at the moment? A clean bill of health or in need of major surgery?

RD : My eyes have been well and truly opened in the last couple of years to the way the industry works in terms of plugging/PR/hype. My previously innocent and naive belief that bands rose to the top purely through talent/deservedness has been well and and truly kicked into touch. It’s a grubby business and I can’t see that ever changing but there are some truly wonderful bands around at the moment and thanks to sites like myspace more people have access to them without needing to read about them in the press first.

VP : Pop Idol, X factor, American Idol , Singing Taxi Drivers On Ice etc . It has been said that shows such as this have turned the country into a huge medieval village that enable us to stand around in the village square and laugh at the fools? What do you think of shows such as this?

RD : Putting aside the analysis – watching the auditions makes for great telly. It’s all about entertainment rather than music…. a ridiculous ego-driven pile of pomp. It spawned Girls Aloud though and they do great pop!

VP: Global warming , should we be worried , or should we just leave it in Bono’s god like hands ?

RD : Ha ha, don’t leave it to that gurning monkey, he’ll accidently drop it whilst adjusting his thinning locks in the mirror. Interesting that Al Gore’s video has been causing a stir amongst educationalists in schools over here. They may call it alarmist but sometimes you need to exaggerate the facts and go over the top to make a point. We should all be worried.

VP: Technology – has it made music more accesible or more disposable . whats your view on how the internet has influenced the whole muisc scene over the last 7-8 years

RD : More accessible I think. From a personal point of view, networking sites like Myspace have been amazing – we have been able to organise gigs so much more easily than before and thanks to worldwide blogs we sold more EPs abroad than over here. Transpose that to the whole scene in general and that’s a whole lot of bands grabbing the DIY ethic by the horns rather than waiting from a phonecall from The Man.(Who ? me ?

) As for disposability – blame the majors for their spit-em-out mentality. Why has longevity become a dirty word?

VP: Five words to desribe how you feel today

2 thoughts on “Tales From The Dark Side – Santa Dog Interview”