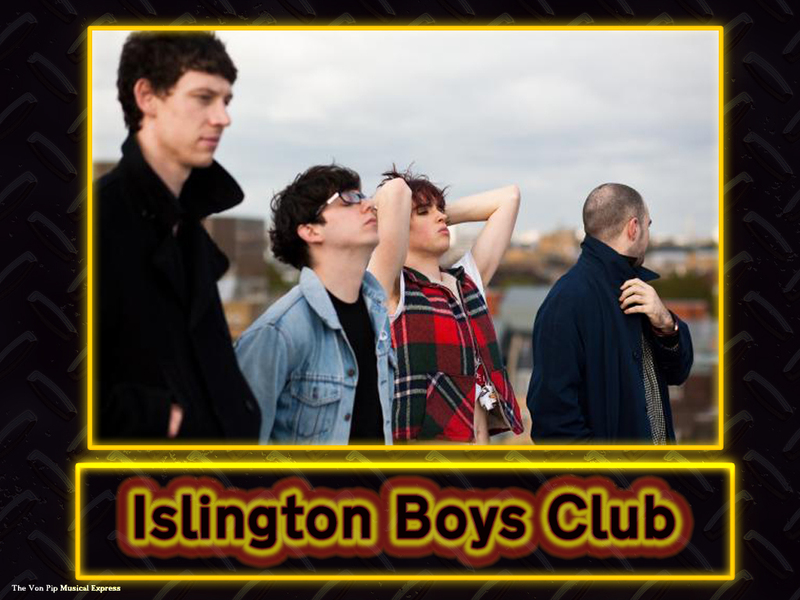 Islington Boys Club?  Maybe the name conjures up memories of the iconic photos of Salford Lads Club used on The Smiths ‘The Queen Is Dead’ album? Which let’s face it is the more likely scenario than you being an actual attendee of the original Islington Boys Club. In this case however, Islington Boys Club is a four-piece band, based somewhat surprisingly, in Islington, London  consisting of Andy Lovelee (vocals/synth), Daniel Silvester Taylor-Lind (guitar), Drew J. Kennedy (bass) and Ed Pearson (drums). If you’re expecting a southern take on jangling guitars and doleful, poetic crooning you’d be somewhat wide of the mark.  The band are one of our tips for 2011 and produce a blend of glittering, dark, glam, goth-pop.  I’d previously characterised them as sounding like the sort of musical hybrid that might emerge should Bauhaus, Siouxsie and Bowie become trapped in Andre Delambre’s matter transporter.

Lead singer Andy Lovlee is acquiring quite reputation for his live performances, being described as something akin to a force of nature,  according to Ed, the band’s drummer he was rather a special acquisition, ‘we were the first band he tried out for when first arriving in London having been introduced by his sister who told us about him before he moved over from overseas’. With brooding vocals somewhere between Pete Murphy and Brian Moloko, combined with the physicality of a young Iggy Pop and the dress sense of Nicky Wire, he makes for a mesmeric front man. Mix that with thunderous tribal drumming and layered swirling guitars and Islington Boys Club have a sound and sense of doomed glamour that makes them stand out from the bland indie by numbers brigade.

Drew, the bands bass player gave us the low down on all things IBC.

VP:   So would it be safe to assume you are all from Islington then?

DREW:  Ha-Ha, well, we have all lived in Islington at some point. Dan’s actually originally from Sweden, arriving in London via Devon, Ed and I are from Reading and Andy? Well he’s a bit of an enigma. We do all live around Islington and rehearse in an old church which actually used to be home to The Islington Boys Club. There’s still a plaque up there now.  We did have lots of other band names on our list, but this seemed to fit so we adopted it!

VP: You’ve already released a double A-side ‘Plastic 16’/’Pristine’, what will you be recording next ?

DREW:  Next single is ‘Misfit Sugar’ is due for release around April. Over Christmas we holed up and recorded about 20 hours of demos, we then started to work out list for a mini-album/EP, hopefully available about June. One of the bands we love and you’ve also written about a lot is, The Joy Formidable.  I like the way they released their mini album [A Balloon Called Moaning] I felt that was a really powerful statement of intent. And they built up their fan-base by earning a reputation as a great live band. They took their time and did it the right way. That’s the path we’d like to take really.

VP: Will it be self released?

DREW: Not sure yet, we are talking to labels, but there’s a lot to be said for self releasing, both have their merits and down sides. We’ll have to see what feels right!

VP: Andy’s getting a name for himself as an energetic and enigmatic front man, being compared to the likes of a young Bowie/Iggy type front man.

DREW: Yeah, he’s certainly entertaining as front men go; he expends so much energy and really gets into it. We all really go for it live, that’s what it’s all about and we really enjoy it.

VP: Musically are you all on the same page with never a crossed word?

DREW:  To be honest we all come from very different musical backgrounds. Dan likes rock and 60’s stuff, Ed’s into his guitar music and American Indie, Andy loves pop and listens to a lot of current stuff, and I’m into electro and dance! In fact my top five albums of last year were all electro/dance.

VP: And do you all have an input in terms of song writing?

DREW: Yeah, we tend to work best by throwing ideas in and jamming on them. Andy comes up with most of the lyrics and we hammer them together!

DREW:  Has to be our mini tour of Italy that was amazing, Rome Florence, Bologna, Genoa and we got a great reaction too. So we’ll be back there in August hopefully.

VP : You shot a couple of videos for your last single, given the advances in technology it must be easy to get a decent video together?

DREW: The first one for ‘Plastic 16’ was done by our friend Clare who does a lot of visual art and she mashed up some you tube clips for us. ‘Pristine’ was shot in Devon by Dave Richardson who is an amazing music photographer based in London. So yes you don’t need a huge budget and we’ve been very pleased with the results.

DREW: Well at present it’s the single and then working towards the EP. We’ve just toured with Ulterior which was great and we are also remixing one of their songs.  So every-things geared up towards June, then hit the festivals and keeps on gigging. Exciting times!

0 thoughts on “Tales From The Darkside – Islington Boys Club Interview.”