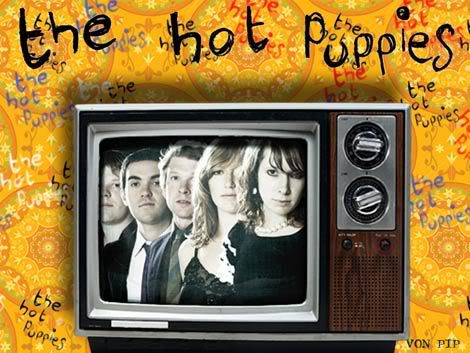 “Somewhere” By The Hot Puppies

The Hot Puppies are from Wales . They sing bittersweet songs of love and regret, they share Pulp’s ability to give small town life a faded sense of glamour, and we at “VPME” love them. Yes, Jarvis may have long since moved on from vegan meals and pondering the world from his bedroom window, but the Hot Puppies are more than worthy contenders for succession to the crown of thoughtful, angst-ridden bed-sit poet laureates of Indie Pop.

They may not quite be in bed-sit land, possibly in private rented accommodation or maybe with a Registered Social Landlord, but they too, wryly try to make sense of life, love, loss and of course, girls who wear green eyeliner. Their songs would be as at home in a smoochy burlesque club as in a writhing moshpit, this is in no small part due to the sultry mesmerizing magnificence of front person, Bec Newman. Catch them live and watch Becky turn into a torch singing rock goddess, she immediately grabs the attention, and her stage presence, combined with the charm and charisma she exudes, usually has audiences eating out of the palm of her hand. To this heady mix add Luke Taylor’s wittily insightful observations and a band that genuinely appear to be totally into what they do, and surely it will not be too long before the Pups hit the dizzy heights before other, more, may I suggest, hyped bands :)

The band’s debut album, “Under The Crooked Moon”, was released by Fierce Panda in July 2006 and was a huge huge critical success. With new album “Blue Hands” to be released this year and a single ‘The King Of England’ out now, this could undoubtedly be The Puppies’ year. We had a chance to speak to the remarkable Bec Newman and find out the why, the what, the who and indeed the how.

VP: Can you tell us about the formation of the band, how did you meet, what were your ideas with regard to the type of music you wanted to play?

Bec: We met in the seaside town of Aberystwyth where Beth & I were at university and Luke, Bert and Ben were in a band already… they wanted a change of direction, and their singer & keyboardist left so they roped in the girlfriends! As for the music we wanted to play… it kind of changes as our tastes change, at the time of our ‘inception’ we were listening to David Bowie, Prince, Devo, and covered ‘Mongoloid’… I think we’ve around in a bit of a circle since we first began, because our new album, Blue Hands, has a lot of similar influences.

VP: Where does the name “The Hot Puppies” come from?

Bec: It comes from a poem, “College Boys: A Hymn of Hate” by Dorothy Parker…
“There are the Hot Puppies;
The High-Place Hitters.
They may be young as years go,
But they are old in night life.
You would never dream of the wicked things that go on
If they didn’t take pity
And clear it all up for you.
They have piled up a nasty record for themselves;
Try and hear it without blushing.
They tear the town wide open
Until nearly eleven o’clock at night,
They talk right back to policemen.
And when it comes to alcohol,
They imply that they can take it or let it alone—
Reading from left to right.
They concede that they are just about as scarlet as they come,
And they perform a mean laugh,
And say that terrible isn’t the word for them—
I heard different. ”

VP: Under The Crooked Moon” was certainly a musical highlight of 2006 and, without sounding as obsequious as Jonathan Ross plugging Ricky Gervais (again), the songs I’ve heard from the latest album “Blue Hands” are absolutely amazing. Did you do anything different in the writing/recording of the album?

Bec: Most of the songs on Crooked Moon had been written long before recording, and we recorded other various snippets over a 6 month period, so it isn’t really an album, but rather a summary of our career up until that point. With Blue Hands, we wrote all the songs from scratch with the intention of making an album proper, and recorded it in three weeks. We wanted 10 songs on the album, went into the studio with our 10 best songs and came out with an album we’re very pleased with! We also had a bigger budget so could afford a slightly bigger studio, and more time, and were lucky to record with Greg Haver.

Bec: Most of this year has been spent writing or recording, so I guess the highlight would have to be finishing our new album!

VP: On stage you exude great charisma and cut quite a dramatic figure, do you ever suffer from pre-gig nerves or is it more like.. Excitement?

Bec: Sometimes nerves can occur, but it’s more when you’re on tour and feeling run down… and you panic unreasonably about forgetting lyrics you’ve sung every night for the last two weeks! But they’re soon calmed by whisky or beer! There is always excitement about playing!

VP: Sexism in the Music Biz? Ever experienced it?

Bec: I often get told I shouldn’t carry something as it’s too heavy for me… don’t really mind that at all!

VP: What’s the weirdest fan/MySpace message you’ve ever been sent?

Bec: I was once sent a message from a boy, asking for my address, who was going to send a car to come and pick me up and take me to him… that was quite weird!

VP: Was it always your ambition to be a singer in a band?

Bec: I’ve been singing in bands since school, and never really thought about what I wanted to do when I grew up… I kind of just drift into whatever is happening at the time, and it seems to have always worked out fine!

VP: The NME? Up its own arse or still a relevant commentator on the current music scene?

Bec: I’m told that it used to be relevant; I don’t tend to read it! I don’t really have an opinion on it, as they never seem to feature any kind of music I’m interested in.

VP: The Spice Girls Reunion ? Girl Power or an obscene example of people trying to squeeze the last drops out of something that was complete horseshit in the first place?

Bec: I’m quite curious to see how that pans out. They’re all reuniting, aren’t they? Even Geri who left. And apparently they’ve had to share out the lyrics in their newer material so she has something to sing! Maybe some of them need the money….

VP: Is Simon Cowell a visionary or the Devil in high-waisted “slacks”? Do shows like The X Factor annoy you in the sense that it’s diverting record companies away from innovative music and force feeding the general public bland, soulless uninspiring “cabaret”, or alternatively is it all just a bit of harmless fun?

Bec: I’ve tried my damndest to avoid those kind of reality shows… only because I don’t think I couldn’t listen to one more person saying ‘it’s my dream, I’m going to give it 110 percent, if only you’ll give me the chance, I have the x factor’ and all that bull shit….

VP: I read with no uncertain amount of amusement that Timbaland is a huge Celine Dion fan and is to produce her latest album. Do you have any “musical crimes” in your record collection you’d like to share?

Bec: I guess to other people there would be ‘musical crimes’ in my collection, but it’s a matter of taste, isn’t it? I like my Technotronic single, and my copy of ‘Do The Bartman’.

VP: Complete the following sentence using just five words: “In one years time The Hot Puppies will be… “

Bec: “Older and hopefully not balding.”

THE GIRL WHO WAS TOO BEAUTIFUL
(fierce panda)

“Shoot ‘Em In The Head (Live)” By The Hot Puppies

“How Come You Don’t Hold Me Anymore ?” By The Hot Puppies

Thanks To Elz R for helping me make sense !