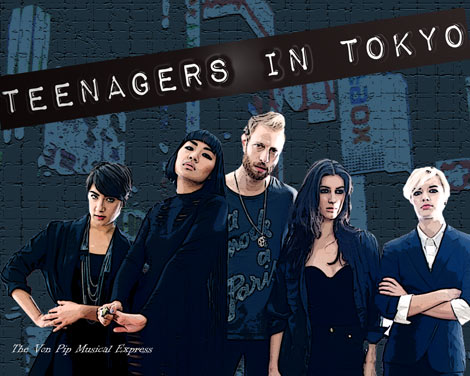 For those who labour under the illusion that Teenagersintokyo are a fresh faced pre-pubescent gang of  J-poppers you better brace yourselves for some news that may well tear your world asunder- they ain’t in or indeed from Tokyo and (*gasp*) they aren’t even teenagers! However, rest assured, once you’ve hear their music you will readily forgive such Machiavellian duplicity.

Four of the band originally met in high school in Australia, becoming firm friends and spent many an idle hour performing acappella cover versions of their favourite songs to universal indifference. Fast forward almost a decade later, add a male drummer, write a clutch of eminently danceable, edgy, dark  pop songs, throw a Mercury nominated producer into the mix and the result is ‘Sacrifice’, a stunning electro pop juggernaught of a debut  album.

Comparisons with recent artists who have produced slightly avant-garde, danceable electronic pop music are seemingly inevitable   –‘a less strident Ladytron, a darker New Young Pony Club’ or maybe even ‘a more coherent  CSS’ are the sort of phrases that doubtless will be bandied about in the coming months but Teenagersintokoyo’s  sound also draws on influences as much from the past, as it does from the present. You may discern for example, the influence of Joy Division/New Order synth flourishes  on songs such as “End It Tonight” or discern the elegant edgy, dream like pop-paranoia of Pauline Murray And The Invisible Girls  on “Isabella”. If smooth synths, jittery guitars and a vocal style that veers between the icy imperiousness of  Siouxsie Sioux to the fragile sonorous, seductive of tones of Juanita Stein sounds like something that would pique your interest than Teenagersintokoyo are a band you certainly need to hear. Strident, stylish, and slick but never empty or manufactured ‘ Sacrifice’ is a debut album that clearly establishes Teenagersintokyo as a force to be reckoned with.  And as tradition dictates when we fall for a band we are compelled to speak with them…..and so it came to pass that we quizzed singer Samantha Lim . . .and here’s what happened . . .

VP: Like your compatriots Howling Bells you’re also from Australia but relocated to London, what was the logic behind that move. Musically did you feel London is the place to be?

Samantha : Definitely. The scope of possibility in London is far greater than in Sydney, just because it’s a much bigger city. There is also a denser cultural history here as well and people seem to be more interested in new music. Because there are so many creative people working in London, it forces you to work as hard as you can and to really push yourself.

VP:Your debut album “Sacrifice” has just been released, produced by Dave Kosten; when a band brings in a producer like David , how does the process work ? Did he have definite ideas about how it should sound, did these ever jar with your own vision or were ideas tossed back and forth until everybody was happy with the end result?

Samantha : One of the main reasons we chose to work with David, aside from the fact that he’s a great producer, was the fact that we all really clicked. From our first meeting over Skype, we quickly realised that we had very similar ideas for references as well as sense of humour, which I think is really important when you’re going to bring someone into the inner circle and workings of the band. The recording process was very organic and collaborative. David definitely has an ear for what he wants, but we do too, so it was working together till we all felt like it was right.

VP: The art work on the album is quite striking, two polar bears embracing, what was the idea behind the visual?

Samantha : The album was the first time that we’d worked with someone outside the band on artwork. Our previous releases have featured illustrations by Miska (Synth). David Lane presented us with a few ideas that really resonated with us. The idea with the album artwork was to present a narrative through the imagery. We also liked how ambiguous the story and images were, that you could interpret it in your own way.

VP: Talking of visuals the video for “Sacrifice’ is also full of powerful imagery; I’ve also often wondered how these things work. For example did you have an input into this or did a director use his own interpretation of the song ?

Samantha : The director, Rhett Dashwood, contacted us a while back asking if he could make a video for Black Bones, a track off  our debut EP. A year after that, he sent us an email with the video, which totally blew us away. We’re always really involved with all aspects of the band, but for this project we were completely removed from the process. It was amazing because Rhett’s video completely gelled with us and the music. We were recording Sacrifice at the time and when we saw the video, the lightbulb went off that we should link it with Sacrifice. It was just perfect.

VP: What sorts of artists have influenced you and who on the current scene do you admire?

VP: What have been the highlights of your time together as a band?

Samantha : Playing inside Sydney Opera House was an amazing moment and such an honour for us. As was supporting The Slits in Sydney. More recently, we played in Dublin to an amazing crowd. They loved it so much that we went on and did our first ever encore. Encores are something that we’ve always been very serious about not doing unless its supremely warranted. So we did it and it was one of if not possibly the most fun shows.

VP:. . . .and what’s been your strangest experience whilst being together?

Samantha : It’s actually a really terrible story, but it was definitely one of the most strange experiences that we’ve found ourselves in. We were driving back to Sydney from Canberra after a show late one night when suddenly we hit a Kangaroo. It all happened really fast and we were in such shock. We had no idea what to do. Luckily a car behind us pulled over to help. I won’t go into the details as it was such a horrible experience and something that you least expect.

VP: What’s the most exciting aspect of being in a band , is it writing when you have that ‘lightbulb’ moment, recording , when the songs take on a whole new dimension, or performing live , when you get instant feedback from the audience?

Samantha : It’s all of these things. Once you have a ‘lightbulb’ moment then you’re working towards the next one. It’s a vicious cycle, but that’s what inspires you to keep going. I guess once you reach the point where it’s not interesting anymore then you have a problem.

VP: Four Girls and one guy in the band, does Rudy ever feel left out of certain conversations? ;)

VP: Five of the most used expressions you’d hear on a Teenagersintokoyo tour bus would be?

Samantha : “Oh really?”, “Can you speak up, I can’t hear you“, “You know it”, “How far off are we?” and also yelling at the sat nav for taking us in the wrong direction.

“End It Tonight” By Teenagersintokyo