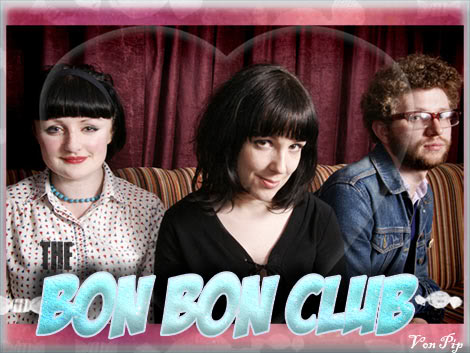 “Romantic Rights” By The Bon-Bon Club

‘Sup dawgs!!‘ When I heard I might be interviewing a member of a  band who are enthusiastic  proponents of  drum and bass I was worried , after all, I don’t know much about all this Jungle D&B nonsense with its fast break beats and ludicrous use of the word “Yo”.  I felt out of my depth and decided to consult with my “homies”, in “the hood“, for practical advice. What would be the best way to approach this interview? I was soon informed by my “crew” -“Don’t be trippin! Don’t be hatin! Break yo’self! fo sho, aye?” which sadly, left me none the wiser. But the ground rules relating to D&B etiquette were quickly established, for example if I liked something, and found it agreeable I should refer to it as   ‘sick’, ‘wack’, ‘fresh’, and indeed  ‘tight’. It was also recommended that I  should  liberally pepper my questions with nonsensical words such as “snizzle, izzle bizzle, pha-shiz” and say “Fo’ sho‘” by way of tacit approval.  Demented hand gestures, resembling somebody with chronic St.Vitus Dance, are also a  key component,  in convincing  members of the “jungelist” community that Iam indeed “dope”. Females, apparently, should be told in no uncertain that they are indeed “the bomb” (or in this case the bomb, bomb) and reference to their bootie (bottom) being “damn fine” is quite appropriate, and indeed welcomed! Oh and  also, if something is “the sh*t,” it actually means it’s quite good and not sh*t  Confused? Yup!

Thus prepared and dressed like Tim Westwood by way of  Alan Ticthmarsh, I trekked across the Pennines to the strange land of Yorkshire within whose hills and dales lies Sheffield, to speak to one member of The Bon Bon Club.  However Reenie (Sushi Quatro) wasn’t, as I soon discovered a “jungleist”, yes, she likes drum and bass but not the sort I had “prepped with my posse” .

She explained that The Bon Bon Club started out initially as the rhythm section—Screech and Renee—from the Long Blondes who were joined by Claire from Slow Down Tallahassee and Navvy. The idea was to produce stark minimal songs using the drum and the bass, the end result was a sinister, yet sexy EP of cover versions,” Rather than slow the songs down on acoustic guitar to ‘show the great song writing’ like every Jo Wiley Live Lounge Indie plodder, the songs get the Bon-Bon treatment, strip ‘em down and rip ‘em up to the real essentials.”

It sounds bloody great, and, is thankfully devoid of  break beats and village idiots “hollering” “Yo!” Yo!” Yo!”, every fifteen seconds. Yorkshire folk have little truck with such tomfoolery.  The EP itself contains a fabulous take on the Cure’s eerie gynophobic masterpiece “Lullaby”, a pounding version of “Love Is Blind” by fellow Sheffield legends Pulp and is produced by the same studio genius, Alan Smyth, who was involved with the original. Things are  rounded off  nicely with a rip roaring version of fellow rhythm -section-only band Death from Above 1979 as “Romantic Rights” is given  the Bon Bon Club treatment !

VP: Your previous band The Long Blondes decided to call it a day last year after guitarist/songwriter Dorian suffered a stroke… That in itself must have been a big shock, how is Dorian doing?

REENIE: He’s doing well, loads better. I get to see him quite a bit at the moment cos he’s living near by. He has plans to make music again as soon as he can,  and I can’t wait cos I’m sure it will be ace.

VP:   Was it a difficult decision for you all to make when you decided the band couldn’t really go on?

REENIE: Not really, cos the circumstances forced the decision. It was sad though.

VP: What are your favourite memories of your time in The Long Blondes?

REENIE: Some of my best memories are from early on when we didn’t have a clue what we were aiming for, when we were just young pups… A bit ago, Screech, Dorian and I went on a memory binge looking through old stuff we had collected. I felt quite proud of all we’d done… too many good memories to mention really.

VP:  Your current band the Bon-Bon Club was originally a side project when you were in the LB’s. Initially you started off covering your favourite songs using just drum and bass. Have you any plans to expand the sound or does your original idea still hold sway? Is drum, bass and vox the future!

REENIE: For sure! I think the original idea came from me and Screech agreeing that all our LB’s recordings sounded ace with just the rhythm track, then we’d go out for a bit, come back, and we’d be like “Where’s all the good stuff gone?? It’s BURIED!”. So we (I) picked some songs we (I) liked and off we went. But now, well, inevitably our stark criteria have become somewhat watered down, and we now have keys too… but Kim is a considerate synth player and not afraid to NOT play when it’s not needed, and so the sound is deffo enhanced, but not drastically altered. And yep, we’re still doing covers.

VP:  Who are the current members of the Bon-Bon Club?

VP:  You’ve released an EP on Thee SPC last year,  have you get any more releases up your sleeve for 2009?

REENIE: We’ve got some studio time booked soon, with the view of releasing one of those cute little 3 inch CD’s, something I’ve wanted to do for ages.  When… I can’t say. We are a bit slack.

VP:  What other songs would you like to give the Bon-Bon treatment to?

REENIE: Conceitedly, I think loadsa songs would benefit from the Bon Bon treatment. But often I try it and it really doesn’t work. A couple of weeks ago I spent an hour working out the bass part to ‘Ruby‘ By Kenny Rogers, and it really didn’t work. So then I tried it on the ukulele, and that sounded shocking too. Fail!

VP:  How did you rate 2008 in musical terms and what sort of stuff did you listen too?

REENIE: 2008 kinda passed me by in terms of new music; everything that I heard / liked was old. My mum knows more about the current music scene than I do. The last gig I went to was Darren Hayman. And the next gig I’m going to is: Darren Hayman.

VP: What did you get for Christmas?

REENIE: A watering can, Sheffield monopoly and about 500 bath bombs.

VP: Five words which concisely sum up The Bon-Bon Club?

REENIE: Pick, kick, snare, hat, rat. Or as a friend of ours said “a band of “little people”‘. We are all almost exactly the same height, and that height ain’t big.

Thanks Darren and Elz

0 thoughts on “Silk and Steel – The Bon Bon Club Interview”