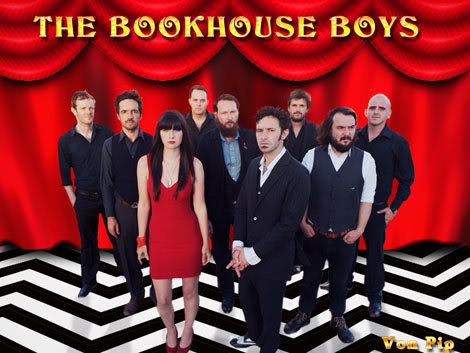 “Dead” By The Bookhouse Boys

“Shoot You Down” By The Bookhouse Boys

Two’s company, threes a crowd, the devil is six and god is seven, and nine is number of members in The Bookhouse Boys, a band based in London whose catchphrase could well be, to paraphrase Police Chief Brody in Jaws, “We’re gonna need a bigger bus”. The band take their name from the secret society with vigilante tendencies, who appeared in David Lynch’s strange and surreal cult classic “Twin Peaks” they have often spoken of their love of movies and soundtracks and this influence is certainly manifest within their eponymous debut album with stunning results. It’s a sound that conjures up images of Tombstone, The Doolin Gang, Nick Cave fronting Dick Dale and The Deltones, and Johnny Cash discovering surf punk, in fact if Tarantino or Lynch ever took it upon themselves to direct a spaghetti western, The Bookhouse Boys should definitely be included on the soundtrack. Between them (deep breath) Paul Van Oestren (vocals/guitar), Catherine Turner (vocals), Chris Pollard (guitar), Pete Emms (drums), William Emms (bass), JP Fellows (keyboards), Heddy Korachi-Alaoui (drums), Natty Defriend (trumpet), and Charlie Beringer (trumpet) have produced an album of such style, depth and quality that it’s sometimes difficult to comprehend that this is the DEBUT album. It demonstrates the richness, style and confidence of seasoned campaigners, but retains the hungry freshness of a band on the threshold of a great musical journey, they are a group who appear to posses an intuitive ability to surprise, delight and intrigue the listener whilst enticing them into their absorbing, richly drawn world of light and shade and all that falls in between!

The album has something to suit every mood, there’s the rollicking Gothic surf-rock of “Dead” the dark celebratory vindication of “Tonight” whilst “Shoot you Down” crackles with sexual tension as Paul Van Oestren growls “I give up the world for you/Now I open my doors to you/I’ll take off your skirt for you/And bury my dirt in you.” To which (and lets be honest, the extremly beautiful) Catherine Turner responds “You’re quite the boy for me/ every good girls fantasy/This is my excuse to Shoot You Down”.  In fact if this band aren’t massive next year then I’ll eat my hat, I’ll eat  Jack “The Hat” McVitie’s hat, indeed I’ll eat anybody who “leaves their hat and calls it their home’s hat!”  (“Excuse me sir, is this your hat?” -“That? No mate, don’t be daft,  that’s my home …” Cuckoo!!) Yup, I’ll  bet my life savings that the Bookhouse Boys are going to be MASSIVE ! I simply must see them live soon ! Living in the North is such a burden! Maybe Tim Leunig’s Policy Exchange report was right! We should all move down south ! At least we’d get to see more of the  bands for whom we profess deep adoration   ;)

I spoke to Will and Catherine about the debut album, their influences, this and that and yes, even the other.

VP:  How did the idea for the band come about, were you all friends before hand?

Catherine: Everyone was friends with somebody else but the band was never really intended to be a band, it kind of happened by itself. Paul had written a handful of songs and played them to a couple of us and we loved them. I think it was James who told Paul he should definitely play the songs live and the rest of us signed up or were drafted in for this impromptu gig. We just didn’t stop.

Will – Indeed. Friends and friends of friends and family were recruited until the Bookhouse Boys took shape.

VP: You’ve been described variously as Nick Cave fronting the B-52s, Tarantino meets Twin Peaks, Johnny Cash goes surf-punk and there’s certainly a cinematic quality to your debut album, was this intentional or did your influences just naturally manifest themselves when recording the album.?

Catherine: I think Paul did have this overriding idea of a cinematic sound which got naturally bigger with the band. I wouldn’t say there were any conscious or deliberate influences beyond that, although inevitably there are artists and sounds that are the common ground between us.

VP: There are nine band members, do you all share a love of similar music or would you say you all have widely varying tastes?

Catherine: Both. There are staples of albums that go on in the tour van that we’re unlikely to disagree on but then there is everything else!! I think individually everybody has a broad music taste and so together it’s pretty wide, yeah.

Will – Yeah with as many of us as there are, inevitably our collective tastes are going to be pretty broad. We’ve got most bases covered.

VP: You’re named after the secret society on Twin Peaks , so it’s safe to say you’re big fan of David Lynch? What is it that seems to appeal to musicians about Lynch’s work and what would you say is his finest moment?

Catherine: I think maybe I’m a bit of a fraudulent Lynch fan because there are still some of his classics I haven’t seen. I’m sure people are drawn to him for different reasons. Musically his long-term collaboration with Angelo Badalamenti is part of the character of his films, it isn’t a case of a soundtrack being rush laid over at the end. Singers and musicians appear in the films and the characters interact with the soundtrack. Maybe that’s appealing to musicians, I don’t know… As far as his finest hour, it really is  Twin Peaks for me.

Will: Paul is a pretty huge Twin Peaks fan but I think we decided that the other day that Catherine came up with name. Ah, who cares. I agree with Catherine. The music is always pretty integral to the storylines in David Lynch movies, whether that be just some really atmospheric drones, someone miming to a 50s classic or a full on sax blowout. I’m working my way through his films but Blue Velvet is pretty good and the first half of Lost Highway too.

VP: Apparently you do a dark cover of Kylies “Confide in Me” live, how did that come about, are you fans?

Catherine: We were asked to play an acoustic set last year and some of our songs wouldn’t translate properly. We wrote a couple of new songs for it including The Valley, which made the album, and had an idea of adding a cover as well. I suggested “Confide In Me” because I love it – I think it’s my favourite ever pop song. Playing it on the mandolin made it sound sinister but actually, Kylie’s version is pretty dark!

Catherine: It’s got to be playing the Uncut tent at Latitude. We’ve never seen so many people or heard ourselves so loud. Every second was brilliant.


Will: Yeah. That was pretty amazing. Our album launch back in August was pretty fantastic too. Great to play some of the numbers on the album that don’t normally get an airing. And what a crowd!

VP: What are your views on Digital music, file sharing and the use of the internet as a means of promoting your music, without needing a huge budget to get your songs heard?

Catherine: It’s not something I’ve ever really thought that much about. I don’t buy music digitally myself, partly because I’m a technophobe, and because I like having something tactile in my hands to take apart and paw over. Saying that though, I think the use of the internet for new artists is invaluable. I definitely go hunting on myspace for new finds. As a friend said the other day it’s great ’cause you start on the page of a band you know and love and then follow the white rabbit down the hole, you can be in there for hours! And everyone can use the internet now right?


Will: We have tried to make our releases so far as beautiful as possible and things to treasure. Cover art and inner sleeves etc are what makes a record more than just a collection of songs. It’s been a while, but I have bought records in the past just on the strengths of the sleeve and made some great discoveries. Someone will inevitably upload a record onto a file sharing site but I suppose the rationale is that if you make something beautiful people will want to have it.

Also if you take making money from music out of the equation any way that a band’s music reaches people should be encouraged and then with a bit of luck they might come to a show to see you which is where the enjoyment is to be had as a band.

Will: The next single “I Can’t Help Myself” is out in a couple of weeks. We’ve got a big show at the ICA on the 11th of November that we are all really looking forward to and then who knows. There is talk of getting out of the country and possibly even the hemisphere to play some shows in the New Year but everything is pretty embryonic at the moment.

VP: Any upcoming bands you reckon may make it big in 09?

Catherine: Us hopefully! No, erm… I’d like good things to happen to Johnny Flynn and the Sussex Wit because that album is remarkable.


Will: Yep. The more people that hear Johnny’s record the better. He’s got something pretty special.

VP: I normally finish with the question “Sum up the band in five words”; however you may need nine perhaps?

Will: Nine people trying to make a beautiful noise together “I Can’t Help Myself” By The Bookhouse Boys