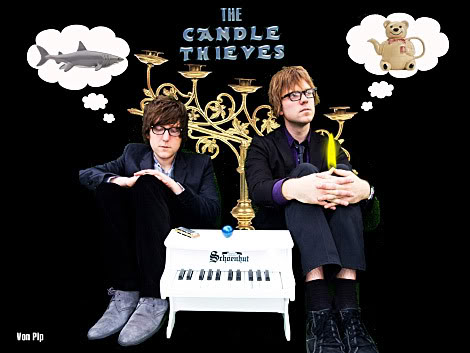 “Sharks And Bears” By The Candle Thieves

The gurning unbearably smug visage of Alan Titchmarsh is enough to put even the most ardent horticulturist off gardening for life . Yes, Britain’s number one “celebrity gardener”(sic) and self appointed housewives choice may well credit himself with being the cure-all for vaginal dryness in woman of a certain age with his green fingered ways and his “racy”cliché ridden novels but for many in the know he’s viewed in a rather more sinister light. The reality behind Titchmarsh’s jovial TV persona, all manly common sense and  faux bonhomie may shock many of his fans for the truth is the man who looks like he dresses himself in Jeremy Clarkson’s cast-offs has made few friends within the bitchy world of “celebrity gardening”. Many believe Alan’s ascent to the top of the gardening tree may owe a little more to Machiavellian scheming than serendipity or indeed talent.  When gardening giant Percy Thrower passed away in 1988 it just so happened to be the very year a young boss-eyed and bushy tailed Titchmarsh was offered his first TV gardening slot, coincidence? ….Perhaps….  When Geoff Hamilton was finally pruned from this mortal coil was it really a naturally occurring illness or was it perhaps something a little more sinister and what of Monty Don’s recent stroke ? There are many in the gardening fraternity too scared to speak out , but  Diarmuid Gavin briefly spoke to us on the condition he wouldn’t be identified  “Bay jaysus” he roared in a hushed whisper lest he be overheard –“ I’m not saying anything  but  whatever you do, don’t  be lured  into Titchmarsh’s potting shed with the promise of a nice hot  cuppa”

So what would it take to get me interested in spending some quality time in the garden again ? Well, Charlize Theron sunbathing would certainly be a tempter , maybe a nice water feature, a self mowing lawn and hey!! What about a  gig by The Candle Thieves……..who…?

The Candle Thieves are Scott McEwan and Glockenshiels, and they have embarked on a nationwide tour of peoples back gardens. Their mission? To make each gig an event and maybe even drive out the Titchmarsh Factor forever….  Their Eels influenced pop is instantly catchy but underneath the jaunty sounding casio led pop  tunes there is a slightly darker tone, detailing life’s worries and problems shot through with an endearing sense of charity shop melancholia. Beneath the dust they see glitter and underneath the decay and neglect they see hope and opportunity.  They may well look like Hiram K. Hackenbacker’s long lost nephews but they have written songs showcased on their debut EP which engage both head and heart , in fact they describe themselves on their myspace page as “a gulity pleasure for deep thinkers”

“The Sunshine EP” is out on September 14th and aptly contains sunshine melodies punctured by  thoughts of despair alongside all the anxieties, hopes and dreams of the modern condition wrapped up in a ramshackle haze of chiming synths, vocal harmonies and hazy daydream pop. It’s  the sound of ice cream melting in your hand on a summers day and conjures up faded sea side glamour yet resides in a place where  dreams may be dashed and thwarted by outrageous fortune but there is always a belief that “the good will out”.

After the washed out, soggy summer we’ve had in the UK this year we decided we needed some sunshine in our garden and had a chat to Scott and the man known only as Glock……The Candle Thieves

VP: Ok tell us a bit about your background, how you met, how you came to write and perform together.

Glock: We met at college; it’s kind of a lie to say we were studying music. We weren’t studying anything, perhaps the art of being stupid. We lost touch after college but I showed up at a gig of his a few years later and we went from there.

Scott: I’d started a solo project and Glock said he’d happily do the shows with me, it kind of developed from there, it was great. I’m glad it did coz we are the only two people who find one another funny.

VP: You come from Peterborough, a town not famed for any particular “scene” is it difficult to get gigs or drum up any interest there?

Glock: Peterborough’s been pretty good to us really. There’s a couple of local promoters that make a lot of effort to organise different nights so we started there. Maybe us walking on stage with an inflatable shark and a bag of balloons baffled a few people into talking about us. Haha.

Scott: Yeah we do love our hometown. There’s an awesome post office where you can send out mail, and the new Subway eating establishment is really doing some great business. But seriously, we do love where we’re from. Everyone there has been really great to us, we appreciate it a lot.

VP: You are about to undertake a rather unusual tour in August, the aim being to perform in the garden of fans up and down the country. Who came up with that idea and have you had any weird requests yet?

Glock: Well we did the ‘Live in Your Living room’ tour last year which was great and wanted to put a twist on it for this year. Our EP’s called The Sunshine EP so we thought we’d majorly tempt fate and hold it outside.

VP: What sort of music would you say has been a major influence on your sound?

Scott: I guess it kind of shows that Eels are a big influence. Music is really about escapism for me, I used to love going and putting on ‘Daisies Of The Galaxy’ and just been taken somewhere else. I’ve never been one for massive solos or vocal gymnastics; I just like a simple song with a lot of heart.

VP: You are set to release your debut EP in September “The Sunshine EP” on Alcopops Records. Can you tell us the track list and a brief resume of what  the songs are about

Glock: Yeah It’s a love song but there’s an undercurrent. It was written at the time the BBC drama ‘Sunshine’ was showing on TV. I loved that program so it became ‘The Sunshine Song.’

My Love Will Clap Its Hands For You –

Scott: We thought it would be cool to have a song that just had a couple of lines in it, sometimes that’s all you need to get your point across. Was listening to a lot of Sufjan Stevens when I named the song!

Scott: This was a really old song, from the solo days, we couldn’t really find a place for it on the album so we wanted to put it on The Sunshine EP. It’s from the early days so we thought it’d only be right to put it on the first thing we put out. It’s about that admitting to someone that you can’t see a light at the end of the tunnel, and that you need them.

Glock: It’s 2 parts self loathing to 1 part, come on Glock, have a shave, you’ll be alright!

Scott: Glock sings this one, probably my favourite song on it.

VP: If we came back and spoke to you in two years time what would you like to have achieved.

Glock: If you come back and say ‘Wow, you’re in great shape! Oh and I’ve just heard the tricky 3rd album, it’s amazing! I didn’t think a funky dub house mix would suit you but geeeez. And really, how did you save the world from global extinction?’ that’d be pretty cool. Oh and ‘ You have 3 wives?’

Scott: Ha ha! I guess I’d like all of that, plus truthfully, would love the songs to help someone, in the way that my favourite bands over my life have helped me. Just for them to mean something to someone.

VP:  The Digital age? Is it great or a bit rubbish …there seems to be very little slow burn success these days, bands are hyped they arrive in a blaze of glory, and often disappear as quickly as they arrive.

Glock: It’s a little scary when you put it like that. The bands that we’re most into are in it for the long haul and we hope to be too. We’ve got some big plans for our music so it’d be heartbreaking to get shot down before we’ve even started.

Scott: Yeah it’s true. I’m very half and half on it. I think nowadays people just go and buy odd tracks off album’s, which is great, but I think it means people might miss out on some great stuff. Like I couldn’t imagine someone going and buying just 3 songs off Pet Sounds or something.

Scott: Wow tough question, I will go for ‘Hombre Lobo’ by Eels, or the new Idlewild record.

Glock: I’m pretty bad keeping up with recent albums, I’ve been going backwards for a little while now.

VP: Who would you hang for crimes against music?

Glock: I’m not too sure about the Death Penalty.

Scott: I honestly respect anyone who puts themselves out there and makes a record..

Scott: Happiness is a revolving door.

“The Sunshine Song” By The Candle Thieves Live Peterborough Met.