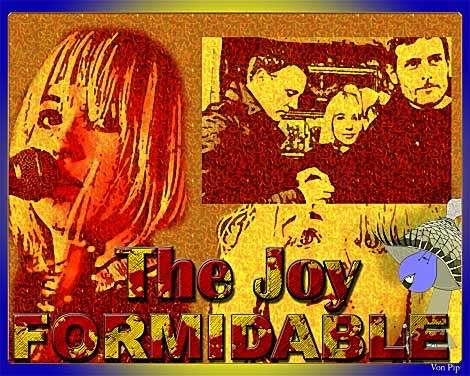 “Whirring” By The Joy Formidable

How do you like your music served?  Are you happy to let “the man” dish up  a steaming plate of turd as he cunningly convinces you his shiny, pre packaged, empty crud is actually “the soundtrack to your life™?” Or are you a little more proactive? Then again maybe you aren’t that passionate about music, perhaps it is merely something you are vaguely aware of in the background as you get on with other things. You may see nothing wrong in big label influenced radio play lists, find Chris Moyles as witty as Wilde  and consider his knowledge of pop encyclopedic ( it actually would leave plenty of room on your average postage stamp)  Hey, you may even view shows that are totally bereft of  substance such as  “Pop Idol” X-Factor” and “Britain’s Got Talent” etc as a bit of  harmless fun. In point of fact you may actually agree with Pete Waterman’s absurd assertions that S.A.W. really were Britain’s answer to  Tamla Motown ( oh per-lease!) You may also harbour a secret yet unspoken admiration for Simon Cowell’s ever expanding business empire, “he’s helping new talent- giving ‘em a foot up” you say (but of course,  he isn’t).  Each to their own, but would it be remiss of me to suggest that maybe you are more a fan of a “robust business model” rather than anything remotely approaching worthwhile artistic endeavour. You probably find Alan Sugar more iconic than Kurt Cobain, Louis Walsh more inspirational than Leonard Cohen and Richard Branson sexier than Jimi Hendrix.  If so you need not read on, for alas,  there is nothing for you here.

Right then, lets crack on, if you are indeed an active and enthusiastic music fan forever looking to expand your musical palette then you may wish to join us and experience the euphoric aural equivalent of a hand job, be swept up in a whirling vortex of energy, emotion and noise and ride into the sun on an effervescent crescendo of sound.  In short you may wish to experience the “beautiful agony” that is The Joy Formidable.

Hailing from the glamorously named town of Mold in North Wales, the Joy Formidable is  comprised of Ritzy Bryan, Rhydian Dafydd and Matt Thomas. Their recent  mini album “A Balloon Called Moaning” delivers the sort of epic guitar pop fused with pulsating waves of noise that calls to mind  the good bits from My Bloody Valentine’s much vaunted “opus”  “Loveless”. In addition it also boasts the sort of ethereal vocal harmonies reminiscent of “Spooky” era Lush.  It’s urgent, thrusting pop music that boldly fuses noise and melody to produce stunning results.  If endorphins could make music and decided to  form a band  that band would be The Joy Formidable.

In order to experience the full on “Joy Formidable effect” it is imperative that you catch them live.  They produce a mind blowing sonic attack of raw emotion and energy and in Ritzy have as compelling a front person as I’ve seen in a long time. Off stage she is polite, friendly, demure, but on stage there is a remarkable transformation as she smashes her guitar around stage with the sort of carefree abandon that would give your average Health and Safety Officer a nervous breakdown. It’s on  stage that the band of three really do become a force of nature with a set that is brutally brilliant and leaves you utterly exhausted just watching the sheer energy expended on stage.  Its quite ridiculous that this marvellous band is as yet unsigned, a situation that will surely be remedied in the very near future…(come on 4AD, this is your kind of band) Ahead of a headlining UK tour we spoke to Ritzy about the band, the music, and that um..…video !

VP:  How did The Joy Formidable get together, had you all previously played in bands before?

RITZY: The Joy Formidable started about a year and a half ago when Rhydian and I began writing together in North Wales. We’d played in a band before, but this signalled the first proper collaboration. We just locked ourselves away and the writing came very easily, we were excited by the connection and the voice that was appearing. Then it was a matter of shaping it in a live sense; first with Justin and now with Matt, who is an exceptional drummer and the dynamic has just grown and grown.

VP:  The band name rather aptly manages to sum up the experience of listening to your music, how did you come up with your collective moniker?

RITZY: It came very naturally once we’d written a large amount of material. We didn’t sit down and think how to surmise our work; but when you’re so involved in making something – your conversations, dreams, imagination they all become obsessed by what you’re creating and a name is one of the fruits of that preoccupation.

VP: Talking of names what does your album title “A Balloon Called Moaning” actually mean?

RITZY: I think for us it had many levels of intent, some personal, some playful.  I’m not one for attaching a blanket meaning to things; not songs, not drawings, not lyrics… you know when something has a value, when it moves you, that’s what’s exciting, not summing it up as an absolute.

VP:  I have to ask, but that video for “Austere”? Banned by you tube? What, erm, ahem.., is actually going on there then? What was the idea behind the video?

RITZY: The unofficial video to Austere was made by a fan and we thought it was a brilliant visual. There was no rational to it being banned from YouTube, it’s all about what you don’t see. We get a lot of videos through from fans, some are more surreal than others.

VP:  After seeing you live for the first time recently, which was pretty awesome,( leaving me unable to speak coherently) it appeared that  you really seem to put everything into your performance , do you get pre show nerves, and does expending such energy leave you exhausted after a show?

RITZY: No we thrive on the live side of being in a band. I very rarely get nervous; and maybe if we were doing Springsteen-esque length sets, some exhaustion would set in… but we’ll have to get training towards that!

VP: You’ve recently been on tour with Howling Bells and it seemed an excellent combination, did you enjoy the tour? What were your highlights?

RITZY: It was a great bill and on a personal level we had a great time with both bands; Chew Lips and Howling Bells. In terms of highlights, I couldn’t single out any particular night when it comes to performing; they’re always different and unique in their own way. I guess Manchester was a homecoming gig for us, and we put on an afterparty  for friends and family and opened it up to anyone who was at the show. It was a great night, a bit disorderly but then the best ones usually are.

VP: Back to your ace debut album, was it entirely self released and what was the thinking behind initially offering it for a free download via the NME’s site?

RITZY: The album originally came out on a fantastic label called Pure Groove, but now it’s self released and available from us. It’s still being offered as a free download from our myspace, we’re well aware that people invest in different ways and we wanted to cater for that. “A Balloon Called Moaning” isn’t really our debut album either; it was always more of a snapshot of work to date. We’re incredibly proud of the release, but the 1st album is coming together now, we’re very excited.

VP:  There’s always a tendency when describing music to try and pigeon hole it via some genre or other. Some terms I’ve heard bandied about to describe your music are “Nugaze” and a “Wall of sound”. What sort of music do you think has influenced your output thus far?

RITZY: The obsession of pigeonholing! As a band our musical influences are very eclectic, and that gives texture to the songs that we write. I grew up on a stable diet of Elvis Costello, Van Morrison, Springsteen, Dylan, and Neil Young to name just a few, all amazing song smiths. But we’re influenced by more than just music as well. The power of being a good artist is to never restrict yourself.

VP: What have been the highlights of your time together thus far?

RITZY: I couldn’t choose.  The dynamic of this band is based on having a very close, personal relationship and that extends to the people that work with us. When you have that level of intensity, the simplest of experiences can feel special and significant.

VP: What plans do you have for 2009, more touring? Festivals? Any more releases in mind?

RITZY: We’re touring in May/June; our first headline tour and festivals are being confirmed now. We’ll be recording the album in the intervals and we have another more unusual release brewing

VP:  Any favourite albums of the year so far?

RITZY: I’m enjoying the Silversun Pickups album…fabulous live band, we did 2 London dates with them last month and they completely wooed me.

VP: Give us a band motto in five words?

“Whirring” By The Joy Formidable