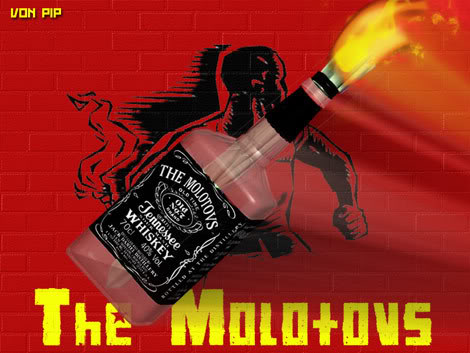 “Hills” by The Molotovs

“One Up On Me” By The Molotovs

First things first, The Molotovs are not, as the name may allude, a band who deliver a crude, noisy incendiary racket. They are in fact a band who create a sophisticated cocktail full of doomed grandeur, delicious debauchery and “sweaty little tragedies,” residing somewhere between Noel Coward and Jamie T, Neil Hannon and Muse, Serge Gainsborough and Alex Turner. Explosive? Possibly, but without being in your face and obvious, in fact they seemed to have developed a sound that one imagines, would fit as comfortably into a chichi Parisian wine bar, circa 1920, as it does within 21st century Britain. Their songs convey a sense of elegant heartbreak conjuring up smoky cafes, absinthe, secret assignations in the shadow of Le Pont Neuf, covert gatherings in French brassieres, whilst the drunken squalor of Zola’s “L’Assommoir” is never far way. It’s the sort of music that could persuade one to wear a smoking jacket, drink four star brandy and embark on a doomed love affair with a delightful young thing from Les Folies Bergère, and to hell with the consequences!! The Molotovs on one hand can convey, musically, an atmosphere of seductive, faded glamour, whilst lyrically they deal in reality, and, amongst other things, the consequences of betrayal within relationships. Sex, drink, regret, drink, bitterness, drink, the guilty emptiness of the deceived and the deceiver, the cold grey ashtray fingers of dawn invading the soft fug of illicit post coital slumber, heralded only by the hollow clink of empty wine bottles, ….but enough about my weekend ;) …..The Molotovs are currently recording their debut single, which, as their recent demos would suggest, should be nothing short of spectacular. We managed to catch Will in between fittings for a new smoking jacket and the warding off the attention of showgirls to find out where he, and indeed his head, is at…

WILL: Four of us went to school together. We were bored. My brother gave me a guitar, and there was an old room on campus which had brown carpet on the walls. We made a racket there, then all went to study in different cities. We then re-met at the end of last year, and tried to make a better racket in a room which is weirdly similar to the one at school, but considerably more expensive.

VP: Where did the name come from? Whose idea was it?

WILL: Our guitarist came up with it. For some reason we were obsessed with being an ‘explosive’ band when we first started tinkering about, and since Molotov cocktails are explosive, we called ourselves The Molotovs. It has nothing to do with the Molotov – Ribbentrop pact, in case that’s what you were thinking.

VP: You’re currently recording your debut single? What’s the name of the track?, when will it be released and what plans for an album?

WILL: Indeed. We’re off to mix ‘I Told You Before’ next week. A friend of ours, who does a lot of production in the studio below our rehearsal rooms in Old Street offered to do it, so we avoided the whole wandering into the studio with someone you may really dislike thing. It’s been fun – he’s got a real ear for harmony and structure, and has been involved in sorting the songs out, as well as recording them.

VP: So where did this decadent 1920’s French torch song vibe, that seems to laconically lurk within a number of your songs come from?

WILL: We all have pretty varied taste in music, and I think, alongside trying to orchestrate five of us without sounding muddled, that led to some sounds and ideas which allowed us to be inventive without being overbearing. “I Told You Before” is deliberately very stripped down, and you can only really get away with that if there’s something slightly different going on. Why that something different is persistently a touch French, I have no idea.

VP: A few of your songs seem to dwell on failed relationships, regret and alcohol. Anything you’d like to share with us on this subject?

WILL: I think regret and failed relationships are pretty universally experienced. But then again, so is missing the bus.

VP: What have been your highlights of your time together thus far?

WILL: Spending a lot of time in the studio has been great, as it allows you to really get to grips with your own songs. Playing Astoria 2 was good – we had a guy who came and shouted ‘let’s walk’ into our dressing room before we got on stage.

WILL: Some of the stuff which is going on at the minute is really exciting. The whole Brooklyn revival, with Yeasayer and Vampire Weekend is interesting, as is the fact that folk bands, like The Cave Singers, have come back into the lime light. The only ugly thing is that whole South London trash punk thing, where a bunch of kids who should know better don tight black clothes and make a right noise, all in the name of being trendy. Get yourself a guitar tuner girls and boys.

VP: Given that trite horse flop such as Kid Rock can get to number one, and given the small amount of sales needed to generate a number 1 single, should we scrap the singles chart? Is it still relevant? (Was it ever?)

WILL: I haven’t paid any attention to it for years. Although I do like that Kanye West tune ‘Take me to the beach, I want to see LA’, which was number 1 for a while right?

VP: Who was the last band/artist you all saw live that made you feel all aglow?

WILL: I saw Sigur Ros at Latitude, and their mix of theatre, music and atmospherics was pretty astounding.

WILL: A Molotovs number 1 in the meaningless singles chart.
The routemaster (come on Boris, you PROMISED)
Obama’s inauguration
A new Radiohead record
The return of the baggy jean

“An Acre Of Glass” Live By The Molotovs