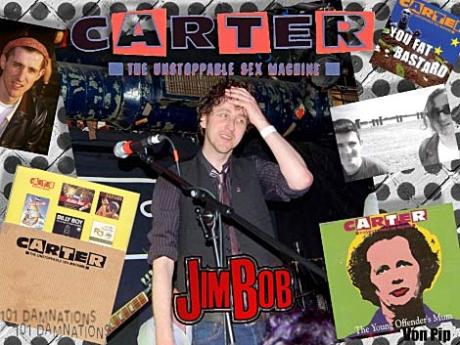 James Morrison (aka Jim Bob) and Les Carter (aka Fruitbat), known collectively as Carter the Unstoppable Sex Machine to you and I, were in many ways, one of the strangest bands to emerge from the indie scene of the late 80’s early 90’s. Dance music and rap had already proved to be extremely popular and many guitar bands had started to experiment with drum loops, samples, keyboards and hip-hop beats and whilst Carter did employ a number of these elements, they very much ploughed their own furrow. Unlike today’s ‘landfill indie’ the musical landscape back in the 90’s was inhabited by many different tribes. Music journalists found Carter’s music problematic in the sense that it was difficult to categorise. They weren’t “baggy” nor where they “dance”, they couldn’t be described as “shoegaze” “grebo”,or “goth” and they certainly weren’t “crusties!” Yet their unique brand of pun packed post punk protest pop culture pick n’ mix became hugely successful in the 90’s, against a backdrop of the Poll Tax riots, Thatcher’s crumbling empire and an England that seemed more grey and grim than green and pleasant, more snakebite and speed then scones and cream teas.

During their career Carter topped the charts, played sell out gigs, got themselves banned from Glastonbury, were sued by The Rolling Stones and banned from BBC Radio playlists. They also managed to get banned from BBC TV and provided one of the most mirth inducing live TV moments of the decade. Fruitbat considerably worse for wear after a day of BBC ‘hospitality’ decided to attack Phillip Schofield (bizarrely dressed as a Disney-fied S&M Dungeon master) during a live broadcast of The Smash Hits Winners Party! Fruitbat’s rage at a compromised set in which the band were faded out was compounded by a rather asinine remark from TV’s ‘Mr Squeaky Clean.’ The sight of Fruitbat hurling himself at Schofield, like, well, a ‘Fruitbat out of hell,’ is still a joy to behold to this day. The aftermath however saw the label seriously consider dropping them and Auntie Beeb cross them off any possible future “Going Live” TV appearances!

After 10 years together in which they scored fourteen top forty singles in the UK, recorded seven studio albums and played nearly 800 gigs all over the world the inevitable tensions stated to surface finally coming to a head during the ‘CARTERBREAKAMERICA’ tour. The final Carter gig was at The Guildford Festival in 1997, after Jim and Fruitbat admitted that they just weren’t having fun anymore. Their story is described far more eloquently and in much greater detail in Jim Bob’s book “Goodnight Jim Bob” which provides a fascinating and hilarious insight into life on the road with Team Carter. In 2007 Carter reformed to play a number of one off shows and due to the success more followed…. as for the future ….watch this space (well, this one actually). Currently Fruitbat is preparing for a tour with his band Abdoujaparov and post Carter Jim Bob has recorded a number of critically acclaimed solo albums and is finally starting to get the recognition he deserves as one of our finest songwriters. He has also just written his first novel, which will see him hit the road in 2010 with a mixture of spoken word and song. We spoke to Jim about the upcoming tour and those crazy Carter years ;).

VP: Jim, You’ve just written your first novel “Storage Stories”. What’s it all about and what inspired it?

JIM BOB: I’ve found it difficult to answer that question when people have asked me. Mainly because my answer begins with the words, “A former rock star…”. People roll their eyes because they think it’s a book about me. Anyway, it’s about a former rock singer who’s run out of money and has to get a proper job. He ends up managing a struggling self-storage warehouse and meeting interesting and weird people. He tells stories about some of them and draws fairly bad pictures of them. I’ve been saying the book is a fictional autobiographical novel with short stories and pictures. It is pretty much all of those. I’ve also been describing it as a funny book but somebody who read it said to me yesterday that I didn’t warn him quite how dark it is. Something for everyone.

VP: You’re going to do a short tour later in the year which you promise will be like a cross between the Royal Institution Christmas Lectures and a foam party at Ibiza’s Manumission, sounds good but what will it involve!

JIM BOB: I am prone to exaggeration. Basically I’m going to read bits from the book and have some images from the book projected on a screen, PowerPoint stylee. Then there’ll be a load of songs. I’ve also become known for ending my gigs with toy bubble machines and don’t want to disappoint my foam fans. Whether or not there’s any live sex or podium dancers in the show, I haven’t decided yet. I’ll have to talk to my roadie Mister Spoons and see if he’s up for it.

VP: You recently played with a ‘ 23- piece orchestra? How did you enjoy the experience and what was the occasion?

JIM BOB: It was my bit in Robin Ince’s 9 Lessons & Carols for Godless People shows that were on at Christmas. The shows were a non religious Christmas celebration with comedy, music and science. I had a fantastic time. Got to hang around with some of my comedy heroes and also to play my song Angelstrike! with an orchestra. It was a dream comes true.

VP: Last year I read your book “Goodnight Jimbob” which recalled your time on the road with Carter USM . If you had to pick one ultimate highlight and one ultimate lowlight of your time in the band what would they be ?

JIM BOB: Off the top of my head I’d say Reading Festival 1991 was a highlight. That and ‘30 Something’ going into the charts. I think we were at Huddersfield Poly and we had a party. Low points were the fights towards the end of the band and just after Les[Fruitbat] attacked Phillip Schofield.

VP: Carter also reformed for a number of gigs. Any chance of any Carter activity in 2010?

VP: Your songs have always contained a wry social commentary complete with your trademark wordplay. Do you think record labels and the public are still open to music which has something to say or has reality TV anesthetised the general public.

JIM BOB: I’m sure if someone won the X Factor and released a record with clever lyrics and a bit of politics people would still buy it. I have no idea how I feel about new music to be honest. I’m confused by it. Everyone’s talking about business models and brands. I have no desire to be involved with it at the moment. I’m sure that will change. It was when I was doing the final proof reading of my novel in my garden shed like Roald Dahl and I realized that I’d rather be an author than a songwriter. I am quite fickle though. So ask me again in a month.

JIM BOB: Even though I have no drive to write any new music myself, I’ve already bought more new records this year than the whole of last year. The Eels album, Adam Green, Fionn Regan, Badly Drawn Boy and that Where the Wild Things Are soundtrack. I’m really looking forward to the new Akira the Don album, which I have the feeling is going to be fantastic.

VP: I read that you hate the idea of download only albums and digital books –why’s that ?

JIM BOB: I’ve given in with music. It’s too late not to. From a selfish point of view, recorded music being free or almost free has affected my living. But I don’t want to sound like an old fart so it isn’t worth moaning about it. With books, I see the same thing potentially happening. Book piracy is already an issue. The thing I don’t understand is a book is such a perfect thing, why change it? It just seems stupid.

VP: Are you pretty net savvy ? What do you make of the way the internet has radically changed the way music is delivered and is file sharing killing music ?

JIM BOB: Like I said, I’m from the past. I hated it when CDs replaced vinyl. The thing that annoys me the most about it all is the nonsense people talk about it. How artists are supposedly earning all their money from live shows and merchandise. Which is maybe true for Radiohead and Girls Aloud but not the bands playing in a pub for 50 quid after hiring a van for £75. Brian Eno said something really profound on TV the other day. He said something about people were more into exchanging music than listening to it. It was the social interaction that was the most important part, not the music. I don’t know if that’s true but it’s nice to hear somebody talking intelligently about the subject for a change.

“Let’s Get Tattoos” By Carter USM

0 thoughts on “The Road To Domestos – Jim Bob Interview”