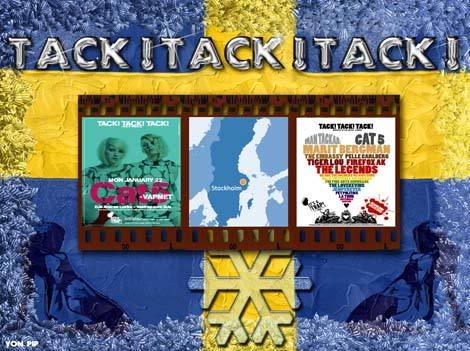 Back to the Swedish invasion ! Today we turn our attention to the promoters of Swedish music in the UK . Tack!Tack!Tack! is a club – the filter for Swedish music and bands in London. Run By Nick and Jason they have put on (aside from their own Cardigans) some notable Swedish names such as first appearances in the UK for The Tough Alliance,Marit Bergman, The Honeydrips, and Maia Hirosawa. They also virtually discoverd Those Dancing Days, and with the help of a rather handsome yet modest fellow with a rakish moustache, they helped create a huge buzz for the young ankle biters (TDD’s) who have recently signed to V2 (Sweden).

Nick Levine stopped watching “The Seventh Seal”, eating meatballs with ligenberry sauce and shopping at Ikea to speak to us and tell us what Tack!Tack Tack! is all about ….

NL: Two years ago at the John Snow pub in Soho. Me and Jason had met two years previous to that at a David & The Citizens concert which he was putting on.
The aim of T!T!T! has always been to put on export-ready Swedish artists irrespective of genre.

VP: Which bands have you had playing or discovered ?

NL: I think we must have put on around 25 different bands on by now. T!T!T! isn’t really about “discovering” bands as the artists we put on are already very well-known in Sweden. It’s more about cherry picking artists we feel are ready to play in the UK.
Probably the most revered performer we have had down is Marit Bergman. Another favourite has been The Tough Alliance, more for the sure cheek of their live performance. And we love the Cat5 girls. One of them lives in Mile End now. Sounds like she could be the inspiration for a Pulp song circa 94.

VP: What do you think it is about the Swedes that make them so adept at writing pop music , and providing high quality flat pack furniture at a reasonable price?

NL :I think that Swedes are very good at copying other genres, in a way sometimes more superior to the original influences. Also, the Swedish government has all kinds of grants to enable people to learn musical instruments. To boot Swedish music is frequently used to promote their culture overseas.

VP: What have been your musical highlights of the year ?

NL: It was amazing putting on a sold out Shout Out Louds gig at The ICA. We got Andres Lokko to DJ, the best-known music journalist in Sweden. And we had print ads in The Guardian, NME, Time Out and even made the front page of Popjustice. We felt famous for oooh…. 5 minutes ? And of course Kleerup/Robyn’s With Every Heartbeat smashing the UK top 5. We predicted that it be this summer’s big hit in Ibiza before Christmas.

VP: What do you think of the current UK music scene?

NL: As we both live in London I guess our view is London-centric in terms of going out to gigs and stuff. I think the current scene in the UK is alright but it’s a bit rubbish how so much of it is based on hype. But I think we’re going through a pop revival, which is great. Pop is the new indie. All genuine musicians now want to make pop music.

NL:The first thought which comes into my head is that back in 2002, whilst residing in Brighton, I was dating a Swedish girl who had to lodge in a family home.. It was during the time of the World Cup, and the father of the house had a tiny Corinthian figure of Sven on top of the TV which he thought would make her feel more at home. It didn’t. She just ridiculed it.

The future of T!T!T! is uncertain , I say NO! It must prevail , message them at myspace . (Purely from a selfish point of view, it must go on, as despite invites I haven’t been able to make it down there as yet )

“Hitten” By Those Dancing Days

0 thoughts on “The Swedish Invasion – Tack!Tack!Tack!”