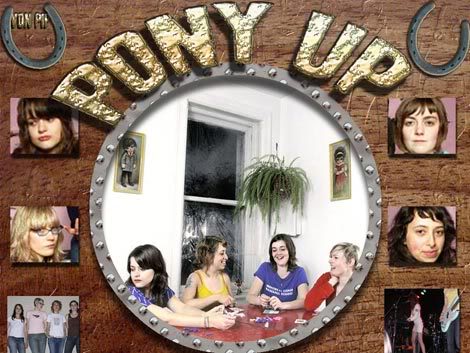 Montréal’s Pony Up first galloped onto the scene with their eponymous Ep in 2005 and have been gathering fans and plaudits at a steady canter ever since. Described as a refined, more poetic Sleater Kinney with a folk pop twist they released their debut album in 2006, the superb “Make Love To the Judges With Your Eyes” to critical acclaim and, this year has seen the albums long awaited release in Europe and the UK . For those new to Pony Up you are certainly in for a treat, choc full of great indie pop tunes it really is a delight, with its bitter sweet vocals, quirky song titles and lyrics so sharp you could cut yourself -(“I remember the beer caught in my throat/and the lonely comfort of my only winter coat” –“Best Offence”)

Recurring themes involve a post feminist take on doomed relationships, loss , regret, isolation, sexuality and lust (“and you know that I could eat you alive/ you know that I could just take you inside”–“Dance For Me”) Despite the subject matter you shouldn’t be left with the impression that Pony Up’s sound is downbeat, it is quite the contrary. The melodies are inspiring uplifting and and in point of fact full of hope. Pony Up never come across as maudlin or self pitying, there appears to be a steely determination to move on and to learn from experience. The ladies certainly have a wicked sense of humour as the songs on their debut EP demonstrate, such as “Marlon Brandos Laundromat” or their homage to Matthew Modine ” Oh Matthew Modine, We want to be your blow job queens !!”

“Make Love To The Judges With Your Eyes” is well crafted, intelligent and at times quite beautiful, maybe the dazzling desolation of the Canadian landscape has played a large part in shaping Pony Up’s world view and songwriting, and there is certainly light and shade in equal measure within. Some of the lyricism is cryptic and it is left to the listener to read into it what they will, for example “The Last Waltz “ could be about somebody trying to leave an abusive relationship “And the exits out of this place are slowly boarded up/But life in here gets easier as I learn when to duck ” but then again I may be completely wrong ! This is definitely, without doubt an album worthy of anybody’s time and for me has been one of the most rewarding releases of the year thus far. It certainly makes you ponder why on earth major labels refuse to sign bands whose music can move and inspire you , insisting on churning out Pop Idol cabaret or dreary Razorlight clones. Does the world really need Johnny Borrell mark two , indeed did we need mark one ? The answer is quite obvioulsy no of course we don’t, but we do need bands as talented as Pony Up , so open your ears and your heart and enjoy the ride as Pony Up prepare to trot across Europe .

We caught up with the ladies prior the their European dates to ask them one or two equestrians (groan ;))

VP: Tell us about how you came together and were transformed into “Pony Up”

PU :On New Year’s Eve 2002 over a bottle of sparkling wine we resolved toform a band. We made a lot of resolutions that night (one for each sip), but Pony Up is probably the only one that stuck. Wait no -Laura’s still off the crack.

VP: You’re playing in Europe and the UK soon , have you played over this side of the pond before ?

PU : We have never played in Europe or the UK before. Three quarters of the band has never even been there.

VP: You have some extremely interesting song titles (i.e.”The Truth About Cats And Dogs( Is That They Die) and of course your album title “Make Love To The Judges With Your Eyes” where do you get your inspiration for such songs ?

PU : I think sometimes we try to one up each other with joke song titles. The most ridiculous often wins out.

VP: Who are your major musical influences ?

PU :To generalize, some of us grew up listening to our parents records (the beatles, the beach boys, the greatful dead, etc…) and that definitely influences us in terms of melodies and harmonies, but then we all grew up in the eighties too, so as kids we loved Tiffany and New Kids on the Block and I think that gives our music a sense of playfulness. Then there was the low-fi indie thing in the nineties – we all loved and continue to love The Mountain Goats, The Magnetic Fields, Cat Power, etc… Man, I could just go on and on! We all like motown, classic girl group stuff, we like top 40 r&b like Rihanna and Beyonce and our most guilty collective pleasure is Avril Lavigne (in her middle period), although Lindsay our drummer is not so into her. She makes us turn it off when we play it in the van too much.

VP: What do you think of the current music scene & what is the musical landscape in Canada like these days ?

PU: Canada is funny. It’s really supportive of its artists, and protective of its culture, which means that there are lots of grants to be had and radio stations must play a certain percentage of Canadian music. That being said, touring Canada is terrible — it’s a barren wasteland of forrests and fields and mountains all covered in snow for more than half the year. You can drive all day and not get anywhere in certain parts of the country. So for small scale touring it’s not very lucrative. Lately there are a ton of bands coming out of Canada that are known internationally, which of course is rad. Until recently most of our stuff was either huge and made it outside Canada (like Brian Adams or Celine Dion) or was smaller and unknown to anyone but us and was overplayed on radio stations desperate to fill quotas. When we were younger if something was Canadian it usually meant that it was sub par, and now half of what I listen to is from here.

VP: What have been this years highlights so far ?

PU: We toured with the Mountain Goats. That was incredible. They’re like, our heroes. Our upcoming trip to Europe and the UK will definitely top off our year of dreams coming true.

VP: Have you any stories of rock n roll excess you’d like to share, tour stories, embarrassing moments etc ?

PU : Absolutely not – we are the picture of decency and decorum.

VP: Global Warming ? Are you worried ?

PU : Heck yes. It is terrifying, and nobody’s innocent. Our generation knows what’s happening yet feels powerless to change things. Hypocrisy is inevitable unless you throw everything away and go “off grid”. Which we’ve considered — but we’d have to be an acapella group.

VP: Female bands in the music industry claim that they often have to work harder than their male counterparts to be taken seriously .Do you agree ? As women have you encountered any archaic attitudes within the biz ?

PU : Yes, but frankly we’re tired of talking about it. It just makes you sound like a bunch of whiners. Better to just do your thing and hope that it’ll be different in the future.

VP: People in bands are, like my good self, invariably mega-cool who effortlessly glide through life’s trials and tribulations. What advice would you give to us “normal folk” in how to negotiate life’s little ups and downs.

PU : We have no idea. We are total dorks.

Click On The Images To Buy The EP And Album “Make Love To The Judges With Your Eyes “