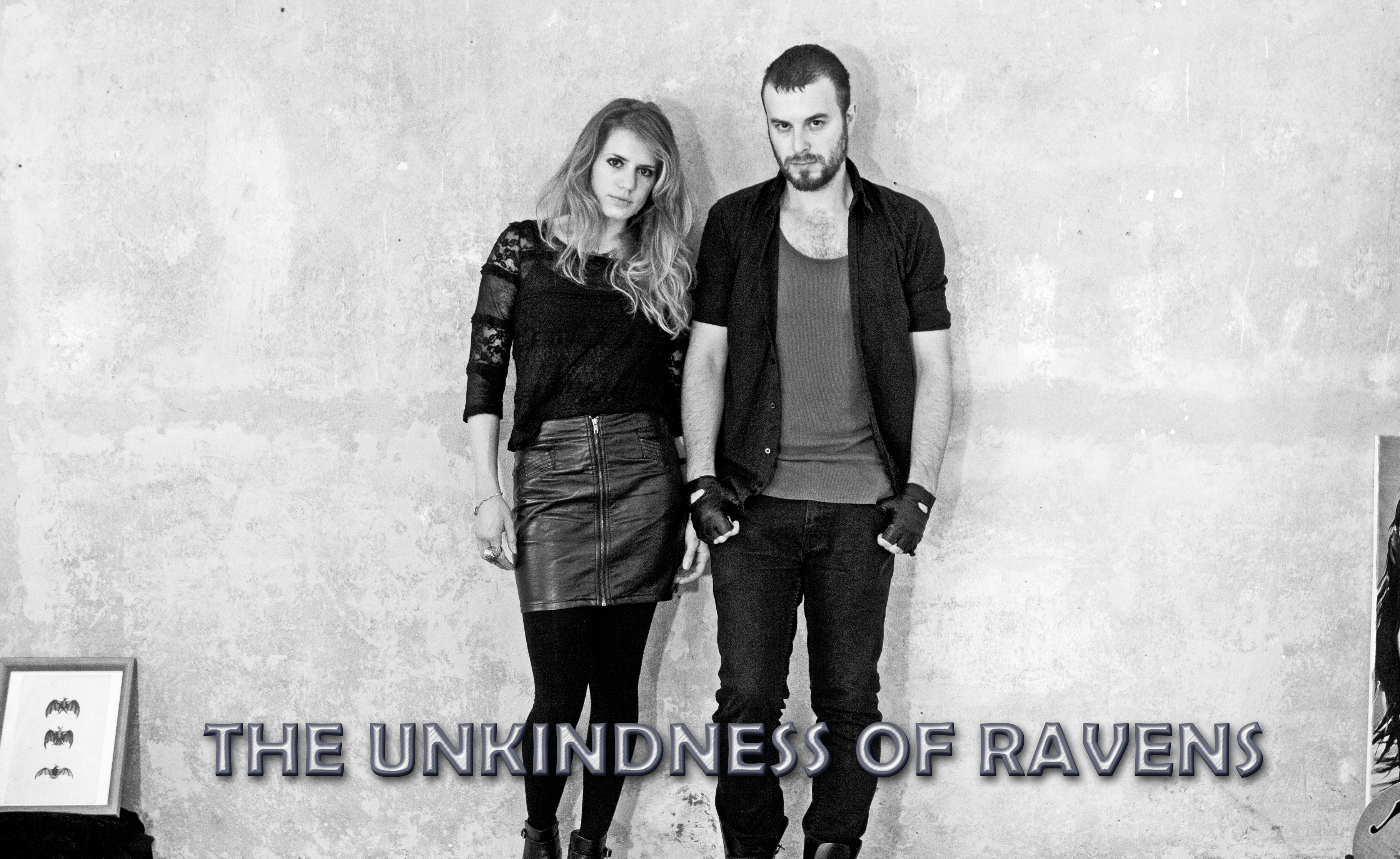 A pride of lions, a  brood of chickens, a corruption of MP’s, a masturbation of Top Gear presenters, these are all factually correct terms used to describe various collectives but let’s face it, they wouldn’t really make great band names.  However electro grunge duo The Unkindness Of Ravens have hit on a collective name which certainly alludes to the ominous dark brooding menace of their sound and which is possibly best described as a genre traversing mind-f**k! It’s a massive noise, full of throbbing, driving beats replete with Ben Raine’s thunderous bass lines. This provides the backdrop for Nina Wagner’s strident, sultry vocals to lead the listener through an aural landscape in which pleasure and pain, darkness, light  sexual obsession and death seem inexorably linked.

Their début album “Virus”, a master-class in cybertronic electro-grunge from outer space,  is due for release in May and it’s a relentless sonic assault of ear shredding brilliance.”

The albums opening track “Viper” with its filthy bass and seductive vocals set the tone for an album which pins you to the wall, whispers in your ear and then throws you on to the couch to have its evil way with you!

It’s also an album which has no fillers, every track is perfectly crafted and  stands on its own two feet. “Prototype” for example, positively drips with the dark undertones of sexual obsession whilst “The Spaces In Between” sounds like some sort of female fronted futuristic version of Nirvana. New single  “Last Call For The River” highlights the ambiguity often found within the bands lyrics  and when Nina sings“ I want to seal your perfection/ Want to kiss your open heart/Want to take you down To the riverside” it leaves you to ponder- are you proposing to seduce me , or drown me?  ( At 50/50 we’d probably chance those odds :) ) “White Road” provides some respite, and shows the bands softer side but still rocks hard enough to make The Kills sound like a Steps tribute band in marshmallow land.  It’s a dark and beautiful album, melding noise and melody to devastating effect and exists outside of any genre constraining boundaries. In fact we were half tempted to make up a new genre in  honour of The Unkindness Of Ravens, but when we came up with “Electro Allan Poe” [groan]  we rather wisely relented and took the sensible option of  interviewing Nina and Ben instead. (Below)

” Last Call For The River will be released on March 5th 2012 on Sonic Fire Records, with their début album set to drop in May 2012.

VP:  Tell us a bit about your backgrounds how you both met and how “The Unkindness Of Ravens” came into being ?

Nina – “Three years ago, I found an ad from some dude looking for a singer and thought ‘hey this seems interesting’. The next thing I knew, we were rocking the clubs and I was hooked. Forever.”

Ben – “I was doing pretty well with a good job, decent money, nice flat with a nice girlfriend, and I became so depressed it was untrue. So I quit all of those things and started this band.”

VP:  Your music’s a kind of genre traversing mind f**k :) , what sort of music has influenced you?

Ben – “We’re both grunge kids, because that’s what came along at the point we became musically aware.  Sonic Youth, Nirvana, Soundgarden, Radiohead, QOTSA, White Stripes, The Beatles, The Doors, and Led Zeppelin are the main bands that have possessed me.”

VP: You’ve spent the last two years touring and releasing a number of singles and an EP …and now the fabulous album ‘Virus’ is set to drop in March, happy with it ? Was recording and mixing it fun and what do you think has been the toughest part in getting the album released?

Nina – “Touring, playing gigs and recording the album has been one of the best adventures ever. The real mission, however, was the production on the album. Since we do everything ourselves, there’s a lot of trial and error involved that can have its despairing moments. Being a DIY band has major challenges, but we’ve learned valuable lessons. This job was always gonna be tough, especially if you have high-ass ambitions like we do.”

VP:  For the uninitiated how would you describe the album in terms of sonics and themes

Ben – “Stripped down tribal electro beats.  Bass guitar going thru a lot of distortions, reverb and delays.  Nina’s vocals ranging from machine-like to deeply soulful.  It’s a record about longing, ranging from lust to a sense of wonder at the universe.”

VP:   You’re now permanently based in Berlin ? a city I’ve never been to but have always wanted to visit.  What is it about the place that draws creative people from all over the world ?

Ben – “It’s got everything I want from a city.  It doesn’t rip you off.  There’s nobody telling you what to do, you feel very free to live whatever life you choose to design for yourself.  It has a historical gravity that you can’t escape, and in exchange for the horror that occurred you now have a very optimistic, human city.  And the people are effortlessly cool, with very little sense of ego.”

Nina – “What really pulled me into the city was the fact that Berlin’s not influenced by the mundane pop culture like the UK is. This is incredibly refreshing and has been inspiring when meeting new artists. Berlin has a tendency to be unafraid of ‘the unknown’ and the Germans show a kind of enthusiasm and appreciation that I miss when I’m in London.”

VP:  Visuals also seem important to you as a band, there’s a  kind of cyber sci-fi noir vibe, what sort of video would you like to shoot with an unlimited budget?

Nina – “One day I want to do a video that takes place in all those derelict properties you find in Detroit… At the moment though, I’m writing this awesome music video that requires pyrotechnics and a futuristic-looking 1968 Bullitt Mustang. The story is Bonnie and Clyde influenced, with a Terminator meets Blade Runner atmosphere and various explosions as we speed down desert roads into the sunset whilst taking over the world… I also want Pam Hogg to design the wardrobe.”

VP:  I hear nothing but good reports of your live shows, is it difficult being a duo to sustain the energy over the set?  The album for example is intense and has a relentless drive to it

Nina – “Our live shows have evolved into something very raw and edgy, and I’ve become pretty relentless when performing.  Because we’re just two people, we have to break up the long shows with our slower songs, but if it’s a 30 minute set, you’ll find me lost amongst the crowds and Ben drenched in sweat whilst swinging Bloody Mary (his bass).”

Ben – “It’s a very visceral live show, and it has to be because people are so damn hard to please.  Live is when you’re really working, trying to turn people onto what you do. You have to stop them dead in their tracks.”

VP:  What’s the plan for the rest of the year ?

Ben – “Play shows in Europe.  Write and record the next album, which may or may not be a Ravens record.  It’s kind of like when QOTSA do their ‘Desert Sessions’ records.  It’s an evolution and a reaction to everything we’ve done so far, and that’s all I can say right now.”

Nina –  “All we know is, we haven’t yet scratched the surface of what we’re capable of as artists and it’s time we dug even deeper. So be prepared for something even more unusual.”

VP:  What’s your own take on how technology and indeed the internet has changed music for better or worse ?

Nina – “With today’s technology such as the internet and home studios, artists have more control over their work and can potentially release whatever and whenever they want. However, with everyone having access to these platforms, artists of substance can get lost amongst the noise. So my advice is to milk your resources, but try not to depend on them. Because the reality to success will always be down to you and your audience and if they dig your music or not – the effect you will have on your fans by playing live shows will always be a million times more influential than how many ‘hits’ or ‘likes’ you get on myspace or facebook.”

Ben – “The music industry is like some post-apocalyptic wasteland and every vaguely independent artist who finds success will have done it in a unique way.  All I know is that if it comes at you from a major label, I can’t buy into it one bit.”

VP: Finally, it’s  desert island disc time pick one album each you love above all others (and why)

Nina – “Nirvana! Any album from them. Forever I will feel the endless possibilities the world has to offer when I listen to this band. I want ‘Rape Me’ played at my funeral.”

Ben – “Beatles ‘White Album’, it’s just always been there and I can’t imagine existing without it.”

1 thought on “The Unkindness Of Ravens – Interview and album review.”