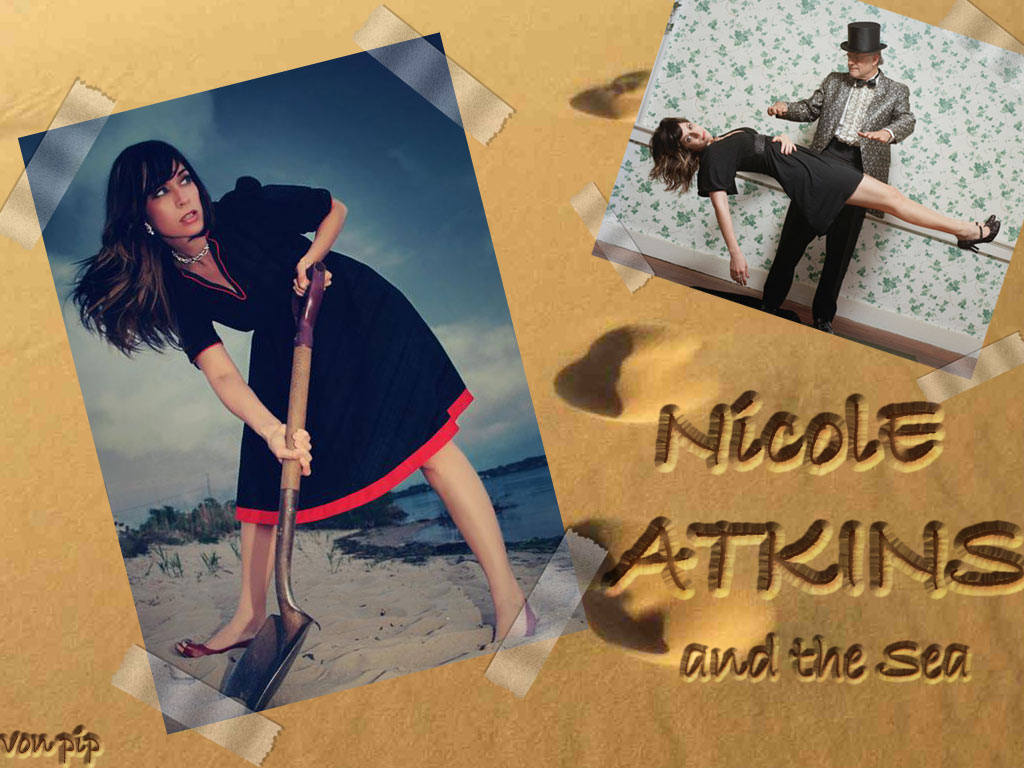 New York based chanteuse, Nicole Atkins’ full length debut“Neptune City” is a luscious, brooding album that challenges your expectations, and takes the listener on a breathtaking musical journey, stopping at some unexpected places en route. Literally, in my case! Whilst enjoying the myriad of delights on offer within “Neptune City ” via my trusty i-pod, I inadvertently missed my bus stop, the result being, I found myself on “the wrong side of the tracks.” I surveyed this bleak, desolate landscape with much trepidation, the risk of attack by the local banjo-playing savages seemed imminent as I discerned within their hostile eyes, an empty, dead malice of a kind that I’d only previously experienced within the realms of a George A. Romero movie. I beat a hasty retreat as demented shrieks of “I bet you can squeal like a pig, boyyyyy” rang in my ears….. But I digress.

” Neptune City ” is a wondrous album, full of lush strings, swoonsome vocals, and heralds the arrival of a major new musical talent; Atkins has been likened to a female Roy Orbison, and has also been compared to the likes of Amy Winehouse, Jenny Lewis, Chrissie Hynde, Janis Joplin and Regina Spektor. Yet while there are elements of truth in such comparisons, she remains very much her own person with her own distinct style. Unlike Winehouse, Nicole’s music isn’t suffocated by her influences, nor does she indulge in the bonkers “other worldly kookiness” of Spektor, what she does do, is to take her influences and use them to construct something incredibly innovative and fresh sounding. The début album is described by Atkins as “the history of my town; it’s the history of my family and friends in this town.” It’s certainly not what you’d call a “genre specific” work as it encompasses many elements and styles, which in a sense, perhaps truly mirror the eclectic nature of her home town. “Spectorian Goth” is one phrase that popped into my head whilst playing the album, which is a hugely atmospheric affair. Yes it doffs its cap with the right amount of deference to its many influences, but it does not define itself by these influences alone, and is imbued with a truly timeless quality. Whilst you may on occasion detect the spectre of..um..Spector,(Phil) and whilst it may occasionally invoke the spirit of girl-groups past, it also manages to sound unlike anything else you’re likely to hear this year.

As youngster music was always a factor and Nicole’s musical diet (the Atkins Diet?) consisted of a healthy mix of The Ronettes, Johnny Cash, and the Big O, whilst she states her first musical purchase was “John Barleymow Must Die” By Traffic. Sundays’ songstress Harriet Wheeler’s vocal style was an early influence on developing her own singing style and Nicole claims her love of all things musical led her to build a huge shrine to Robert Plant out of hair, biscuits and an old mop-head. She has cited David Lynch as major influence which is no surprise; one could imagine a number of songs on “ Neptune City ” appearing on a Lynchian soundtrack, as Atkins sound definitely contains a sweeping, cinematic quality. “The Way It Is” is almost Bond-esque and is a far superior number than the not so golden, misfiring gun, that is the Jack White/Alicia Keys “howl-athon/warble-fest,” whilst title track “Neptune City” has a distinct “Twin Peaks” vibe. It’s also a track that could well be a Gothic noir, 21st century flipside to “Old Cape Cod.” Where as Patti Page asked “If you’re fond of sand dunes and salty air.” Nicole tries to make sense of her hometown with “I’m sitting over Neptune City / I used to love it / It used to be pretty“ and laments “Our hearts are singing out just for you/ a cemetery song for summer.”

Nicole has played alongside the likes of The Raveonettes, The Pipettes, The Long Blondes, Clap Your Hand Say Yeah and Chris Isaack and her music has been steadily gaining an enthusiastic army of fans, which include in its number, Alfred E. Neuman doppelgänger David Letterman. After performing “The Way It Is” on his show, the toothsome host asked Atkins, “Wanna get some steak?” to which she could well have responded “Maybe?…. Tonight?” However the offer bore neither fruit, nor seared bovine flesh and Nicole later joked that she wondered if “getting a steak” meant something entirely different from what she’d envisaged!! As well as Letterman she’s appeared on the Conan O’Brien show, The Late, Late Show and recently gave a fabulous live performance in the UK on “Later with Jools Holland” alongside The Kings Of Leon, Metallica, and Carla Bruni. (One hopes there were no more misinterpreted remarks and Jools didn’t invite any guests for a spot of after show goose!) While she was in the UK we had a chat with Nicole about New Jersey mobsters, turning into Jack Torrance and hanging with “The Boss.”


VP: When did you first start writing music?

NICOLE: I’ve been in bands since I was twelve singing and playing guitar but I started writing my own songs after I graduated from university. I moved home to New Jersey and there was nobody left around so I started writing songs to have something to do.

VP: You’ve been described as anything from Janis Joplin to Tony Soprano but who would you say where your major musical influences?

NICOLE: Tony Soprano? Hahahaha! That’s a new one! My biggest influences if I had to cut them down to seven would be Arthur Lee from Love, Traffic, the Mamas and the Pappas, Angelo Badalamente, Roy Orbison, 1960’s musicals from Jones and Shmidt, and Wilco.

VP: You’ve said your sound is “pop noir.” Can you expand on that definition?

NICOLE: I thought my songs sounded pretty poppy or catchy but they were all about really dark things. So it just means, dark pop. Songs about dying that you can dance to!

VP: How did you find working with Tore Johansson on your album ” Neptune City “?

NICOLE: He was great to work with. He is a very abstract type that speaks in dreams rather than logic. He pushed me to take my arrangements even further than I thought I could. The only thing I didn’t like about working with him was being out in the Swedish winter, alone. I felt like Jack in “The Shining”. Just the isolation, not the murderous impulses, ya know?

VP: You recently appeared on “Later with Jools Holland” along side the likes of The Kings Of Leon and Metallica. What was that experience like?

NICOLE: That was the best night ever!!! I’m a huge Metallica fan. I met them that night and they were seriously the nicest rock stars I ever met. So down to earth and humble and encouraging. Carla Bruni was mad sweet too! We played with a string section that night, ughhh, I wish we could do that every night.

VP: You went to college to study illustration, is it something you still do, or don’t you have time these days?

NICOLE: I still do it, but mostly comics on the road. Any bigger illustrations and paintings are strewn around my apartment, unfinished.

VP: Has the internet had a big effect on your career so far?

NICOLE: Of course. The internet is a great way people can discover any music.

NICOLE: Hmmm, there seems to be a lot for me. I went on my first headlining tour, played the Conan and Ferguson shows in the states, Jools in the UK, recorded a song with David Byrne!, played all the major festivals in the U.S. like Lollapalooza and Bonnaroo and the like, did my first European tour and played Wireless O2 in the UK.. Did some TV in the Netherlands (3am! ew) I met and had a good couple hangs with Bruce Springsteen in my hometown (we live in the same hood), and meeting Metallica and Dennis Hopper was a highlight for sure! I also sang backup vocals on AC Newman (the New Pornographers) new solo record. It’s awesome!

VP: Five words to sum up your week?

“Maybe Tonight” Live on Later With Jools-Nicole Atkins & The Sea

“The Way It Is” Live on Letterman-Nicole Atkins & The Sea

26 thoughts on “The Way It Is -Nicole Atkins Interview”