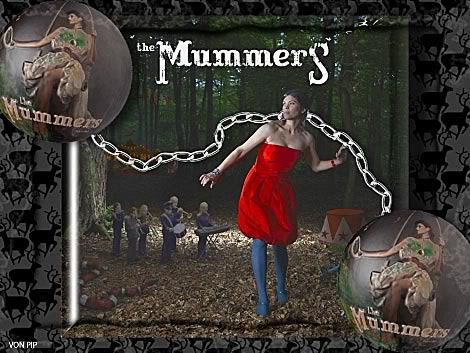 “Lorca & The Orange Tree” By The Mummers

Just think, if Bjork hadn’t suffered that nasty trauma to her elfin like noggin when plummeting towards Wonderland via the rabbit hole, her recent output may well have been somewhat less self indulgent and a little more palatable.  Maybe she too would have been able to produce something as magical and majestic as The Mummers “Tale To Tell”. Unlike Bjork the Mummers do not indulge in ludicrous “avant garde” squawking, shrieking or gurning,  nor do they feel the need to resort to incoherent babbling  relating their somewhat misguided belief  that they have the ability to commune with  imps, pixies  and other magical woodland creatures, and to be honest their music sounds all the better for it . The Mummers have also remembered that it’s often beneficial when writing a song to include oft overlooked necessities, for example … a tune.  There will always be artists who, when given the freedom to experiment, can produce something profoundly beautiful and by the same token there are others who, rather like Al Pachino without a firm directorial hand, will sadly lapse into laughable over the top self parody. The Mummers quite firmly fall into the former category whereas The Icelandic Princess of La-la Land has drifted dangerously close to the latter.

“Tale To Tell” is an incredibly liberating album; it conjures up memories of those seemingly endless sun filled summer holidays of yore, when life was full of magic and infinite possibilities. Yup, it really does transport you back to the days when the world seemed a place of discovery and wonder,  before you donned the blinkers of adulthood, conformed, and somehow became all that you once despised.  The album could also serve as a useful point of reference for Mark Ronson, namely with regard to “the correct use of horns”. It’s an album that combines a myriad of influences and the result is a gorgeous euphony of sound and styles that skillfully combines pop music with classical,  film scores with cabaret  and includes swathes of  swooning orchestral flourishes all underpinned by Rassia’s amazing voice . It’s the sound of a West End musical written by David Lynch and could also quite easily fit rather snuggly into the soundtrack of Tim Burton’s forthcoming much anticipated adaptation of “Alice In Wonderland”

The Mummers universe is essentially centered around London-born singer/songwriter Raissa Khan-Panni, a musician who previous musical incarnation “Rassia”, discovered that critical acclaim doesn’t always result in commercial success. When her solo work started to stutter she returned to long joyless hours of waitressing, but continued to write  and make “fairytale versions of the mundane”, for what would come to form the basis of her latest musical project. We spoke to Rassia  to find out more about The Mummers and the art of Mumming…

VP: Tell us the story of The Mummers, how the project came about and who is involved?

Raissa: ….Naturally ….
It was during a time when I went back to waitressing in a slightly bleak period of having nothing again. I was writing lyrics and thinking about creating a project that was the farthest removed from my life at the at the time, when by chance Mark Horwood sent  me an orchestrated version of a ‘Riverman’ cover I’d done. It was so perfect and I hunted him down for a year (he’d disappeared off to LA) eventually finding him in the countryside outside Brighton living in a Treehouse studio he’d built and it was full of the most wonderful instruments and it inspired a lot of the imagery in the album. So we started The Mummers straight away with a former collaborator of mine Paul Sandrone gradually expanding it to include about 20 musicians from Brighton and around.

VP:  So you recorded the album “Tale to Tell” in a tree house! One assumes this was not your average tree house!!?

Raissa: It is a wooden extension of a house that Mark built high up in between two massive Pine Trees. You access it by a steep and slippery wooden staircase and it is filled with old keyboards, harmoniums, organs and percussion instruments.

VP: You’ve previously been involved in the music business, but despite the critical acclaim, as mentioned, you went back to waitressing. Did you always believe that you would return to music? Was it a case of just waiting
it out?

Raissa:  I always knew I would return to music – in fact I never stopped, after my solo project I started experimenting with underground garage, drum n bass and house whilst preparing for The Mummers.

VP:  How would you describe “Tale To Tell” to the uninitiated?

Raissa: An intimate and personal perspective of the world that creates fairytale versions of the mundane.

VP:  What sort of music/ musicians have been major influences on your work?

VP: How did you enjoy the recent appearance on Jools Holland?

Raissa: It was amazing to be a part of a show that included The Specials and Carol King, we were in awe. Scary to be performing on live TV especially as I’d lost my voice the week before. It was a total buzz however and we were like over-excited school children.

VP:  What musicians past or present, dead or alive would you love/have loved, to work with?

Raissa: Festivals all summer, and then a UK tour in autumn hopefully, finishing the next album.

VP: What’s been the highlight of The Mummers thus far?

Raissa: Jools Holland and seeing the album racked in HMV for the first time.

VP: What are the five most important words in the Mummers’ vocabulary?

The Birth Of The Mummers