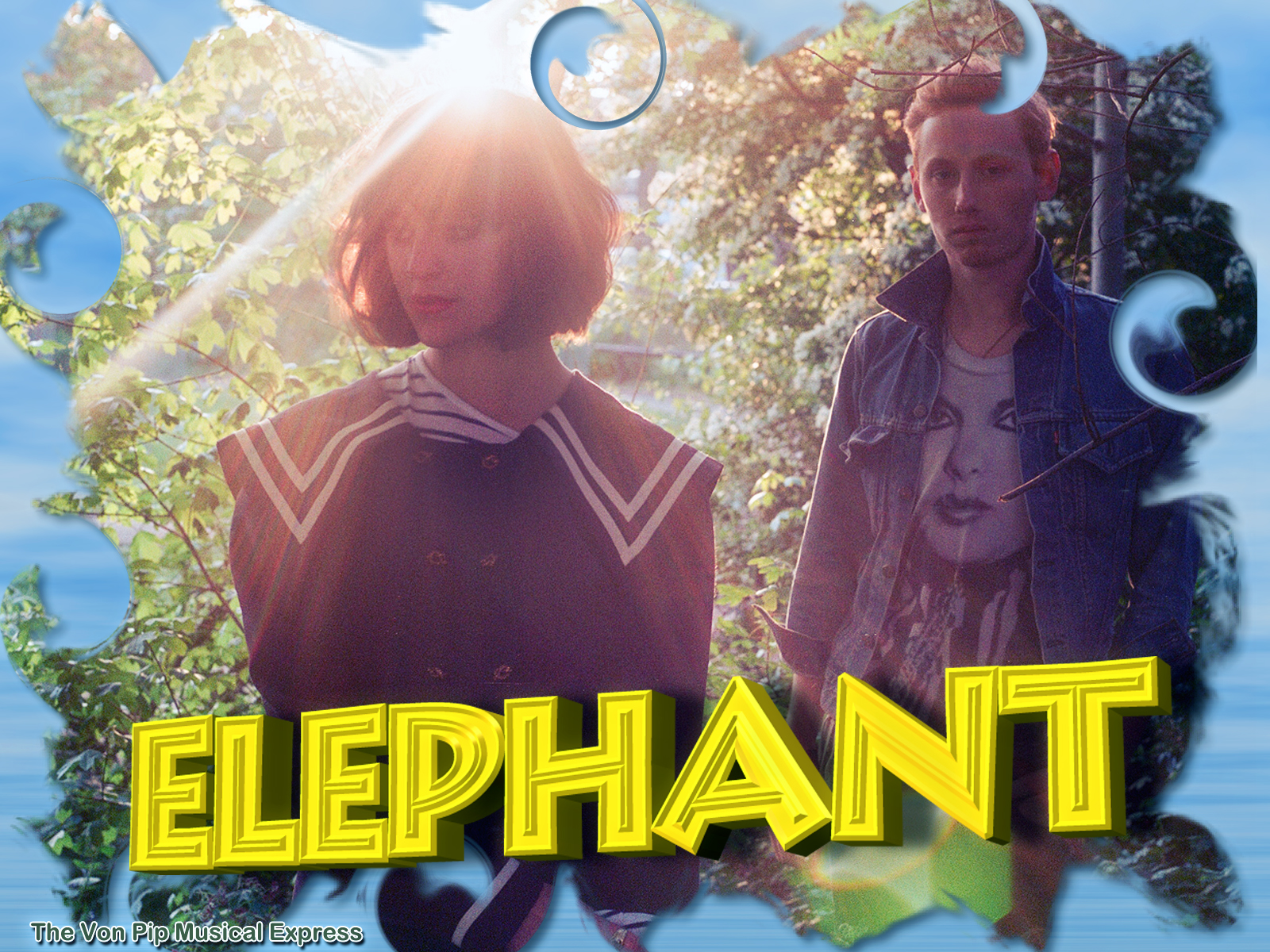 Memphis Industries are a record label I’ve admired for some time , a label that manages to pluck pearls from the raging sea of musical inanity and provide shelter and artistic succor  to a diverse mix of interesting artists ranging from the likes of Tokyo Police Club, The Pipettes, Frankie Rose and The Outs, Theoretical Girl, The Go Team right through to Dutch Uncles. One of their newest additions is electronic duo Elephant, consisting of Christian from Bristol and Amelia who is described as French-by-way-of-Pontefract (I think that sat nav may need fixing) and they certainly don’t disappoint.

They have just released their debut EP in the wake of a couple of well received 7”s which serves to consolidate the view that Elephant are a genuinely talented and beguiling proposition and really should be, in a sane world,  mentioned by many of the ubiquitous year end ‘ones to watch lists”  that bloggers and zines will soon be unleashing. Sounding  rather like a softer more emotionally connected Dubstar, or possibly a more carnal St Etienne the EP boasts a level of sophistication and lightness of touch that is a rare in a pop world that  thrives on “in your face” bombastic production, death by  Vocoder and OTT showboating. Elephant’s minimalist approach produces music that is full of languid, sensual beauty and haunting elegance proving that less is so often much, much more.

And Amelia not only posses one of those pure, crystalline voices to die for, she also has an uncommon talent in that she can keep singing whilst enjoying a full on snog with Christian as showcased on their previous video for ‘Allure’ (see below.)


So we grabbed the bull by the horns, or if you prefer, the Elephant by the tusks and chatted to the duo.

VP:  Tell us some more about Elephant, who you are, what inspires you and what your hopes and dreams are?

Amelia: I’m Amelia Rivas my main hope is to clear my student debt. But my biggest dream is to be able to buy a huge house by the sea that I can have all my favourite people living in, where it is just footsteps away to catch my own squid. I will be the head chef of the house, and Jamie Oliver will be my assistant

Christian: I always thought the method behind making music was to be able to create the idealistic genre and sound that combined all sources of inspirations and emotions. I guess it’s almost like painting, a documentation of what I am getting my kicks off. My hope is to create a record that has longevity. My favourite records are those ones you didn’t grasp in the first few spins, but unravelled after persistence (Portishead, Dummy).

VP:  When you met did how long before you started talking music and how did the decision to create ‘Elephant’ come to pass?

Christian: Both of us have always been creating in one way or another, when we met we just needed some way to capture the sparks that were setting the bar on fire, and I guess Elephant was the medium we chose to express that emotion. Elephant seems almost like a very personal diary that is being thrown out for everyone to read.

Amelia: As soon as I met Christian, we agreed to meet up and make music, Elephant was immediately born. We had the same musical influences and work together so easily it was remarkable.

VP:  .Musically it would be fair to say it’s haunting, evocative somewhat ethereal, did you plan to make music that had this sort of vibe or did it happen ‘organically’ ( as they say these days?)

Christian: Everything we do happens organically. We start with a thought and build it up until it translates physically. Most of our songs are about escapism, realised through Amelia’s dreams. She sleeps with her notebook under her pillow these days.

Amelia:  Yes my lyrics are usually about my dreams. I have the most ridiculous, vivid, terrifying dreams so I think this most probably transpires into the music. This was never intentional; I wish my dreams would stop, especially when I wake up thinking my teeth have fallen out.

I think the music became quite eerie as a result of us having extremely long writing sessions. Our songs are usually made in the early hours of the morning, when the bad people of the world are just coming home.

VP: Your debut  EP Assembly contains four beautiful synth pop gems , are these an indication of what we can expect  on the album, which I’m believe you’re going to France soon to finish ?

Christian: We have a very strong idea of what the album is going to be, but it is very far away from any sort of written thing yet. We have hundred of sounds, concepts ideas and memories that need to be collated together. We’ve started writing the second album before the first, and now we need to go back and reassess. It’s a funny way of working.

Amelia: The album is a hurricane of new influences. We are really excited about the progress of it. Lots of 80’s synth solos with children’s screaming all over it. We are really hoping to be able to escape to France, I want to leave London and bury my head in a pile of cheese and pop music.

VP: Does Elephant still just consist of the two of you or have you expanded?

Christian: Just me and Amelia. We have other players and contributors, but we are a duo at heart

Amelia: The two of us still write the music, but live we have a new keyboard player Colin. He is tall and Swedish.

VP: You’re signed with Memphis Industries, how did that come about?

Christian: Memphis are like a family to us. They told us that they missed nurturing a London based band, as they had been dealing with a lot of American acts and I guess we fitted the bill.

Amelia: I knew Memphis from my last band UltCult. When I started Elephant I emailed Ollie our first demo, and foolishly he liked it. They are great; they get me really drunk for free.

VP: How do you rate 2011 for new music?  Good bad or meh . What have been your favourites?

Christian: Autumn has been amazing for releases, some of my favourites have been Active Child, Real Estate, Tom Waits, Twin Sister, Sleep Over, Future Islands. I think there is so much rivalry and competition now it just makes me even more ambitious to make an innovative record next year.

Amelia: I am not great explorer of new music. I don’t know how people go about finding it. I keep going back to golden oldie tracks, Earth Wind and Fire are my favourite at the minute. However, I do like a band called ‘Friends’. My mate played the track ‘I’m His Girl’ to me last night and I’ve been listening to it on repeat ever since.

VP: I always assume that people who are purveyors of electronica live a dazzlingly  futuristic existence serviced by a butler robot in a world  filled with all manner of amazing gadgets. I may of course be wrong, but what are your fave gadgets, musical or otherwise and what hasn’t been invented that would improve life immeasurably?? …..

Amelia: I am not good with technology. I have been a loyal Nokia owner all my life, it’s about all the technology I can handle. If I could acquire any musical instrument it would be a golden keytar, I haven’t persuaded the label to buy me one yet.

Christian: I think the iPad is bullshit, well that’s my starting ground. I don’t believe in new technology or gadgets being that exciting, it’s reinventing old technologies that inspire me, and giving them a modernist twist. Of course the slow induction of cheaper home recording products has really influenced the music industry. Our advance with Memphis for the album was upgrading my home recording set up. I think that’s the way the industry is moving: independence.

VP:  How do you enjoy music, do you download , stream, prefer the physical aesthetic or is it a mixture of all.  How do you see the delivery of music evolving in the future?

Amelia: I think live music has become the most important element of music. It is the only way artists can get any money, everyone is downloading left, right and centre (including me)

VP: Finally five words to describe Elephant would be……