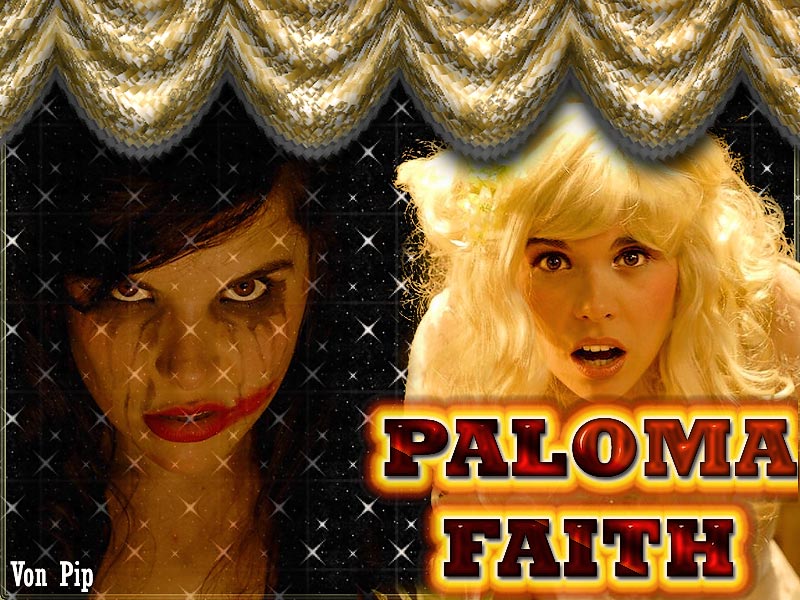 Paloma Faith is a name we predict, will become a household name within the next few years. The enigmatic Ms Faith has everything it takes to break into the big league, she’s got the songs, the voice and the style and that “off the wall” uniqueness that all great artists have. She has been a magicians assistant, involved in the burlesque revival, and has that sort of “Amy Winehouse but with extra odd-factor ” soulful voice, with a wacky “Bjork meets Róisín Murphy whilst possessed by the ghost of Billie Holiday” kind of vibe going on.  She has left people who have seen her live, open mouthed , “Amazing”, they cry “What the…. was that…?” they gasp… “Very very cool !”……….“Best live show EVER!!!!!” “A true aesthetic experience for the ears, eyes and the senses “

She says herself “I think I represent a sort of ‘child of our age’ in that I don’t commit to any one genre or style; the culmination of all of my influences pays homage to the past by bringing it right in to the present. The music industry is terrified of any powerful woman it hasn’t built from the ground up”

Her shows apparently also include illusionists, singing blindfold, fan dancing and “the unexpected”, so we at The “VPME” skipped merrily along the yellow brick road and tremulously peeped behind the curtain of mystery to find out more about the amazing Paloma Faith .

VP:What is your musical background, Are you self taught or classically trained?

Paloma:I don’t have a musical background as such… I actually have a theatre background. I trained in Contemporary Dance and then I went to do an MA in Time Based Arts, which included installation, performance art, theatre, and site specific performance and direction. I was just walking along life’s path looking for a medium that can communicate a universal language. A language accessible to all, and there she was-the goddess of music!

VP: What’s been the main inspiration for you “grabbing the bull by the horns” and going for it musically?

Paloma: The fact that every one listens to music. Not everyone comes to exhibitions or goes to the theatre, but music is EVERYWHERE and people can’t ignore it even if it is not to their taste. Now I love it so much, I cant think of doing anything else. I really thrive on it from the song writing right through to the performance. It’s really exhilarating.

VP:It must be said you have an amazing voice, wonderful songs and an extremely stylish, vampish image. Are you yet in a position to launch yourself upon an unsuspecting world, or are negotiations ongoing?

Paloma: Well, it’s a bit weird in the industry at the moment. People are scared to take risks because they are loosing so much money on record sales, so there are negotiations going on but I want full creative control and that is a whole other story. I have thought about doing it myself but I couldn’t possibly fund the standard I want to achieve myself. I don’t believe in doing things for the sake of it, I want to do the best I possibly can all the time so I guess I am just waiting to see if Time gives me a little helping hand soon!!!! I don’t want to miss my train!

VP: Live performances? Are they’re any on the horizon, and what could a newcomer to the Paloma Faith experience expect from your shows?

Paloma: Expect the unexpected!!! I never ever do the same show twice and I never really look the same either. I believe in reinvention on a daily basis. I loved that film ORLANDO… That’s what I am like!!! I find myself giving a lot to the audience too. If people aren’t in to the style of music I do, I can guarantee they will be pleasantly surprised by the live experience. I didn’t train all those years in performance for nothing! I always try to make it both sonic and visual. It’s always surprising to see what I might pull out the bag. Next gigs: 16th Aug Madame JoJo’s, 30th Aug Hoxton Bar, and 12th Sep Macbeth pub – but they are all listed on Myspace so keep checking!

VP: Is the current music scene providing a healthy well balanced and varied diet, or is it just offering no diversity at all, is it in fact the musical equivalent of the choice between the corporate stodge of Big Mac or Burger king?

Paloma: I think all the music that is coming out of Indie labels and Myspace warfare is fantastic, people are really pulling some stuff out the bag right now. The labels haven’t caught up yet, they are signing safe bets all the time, and spend too much time just trying to cover their backs. The biggest successes in history have always been born out of dedication and risks! You have to SET trends not follow them!

VP: Social networking, good bad or ugly? Have sites like Myspace given the artist more control?

Paloma: Yes they have!!! It’s quite a brave thing to do though because you leave yourself completely open to criticism as well as success. You can’t predict the outcome. I think it’s amazing though, people like me become known without having to rely on the music industry. I haven’t joined face book though.. I’m a bit scared of it!

Paloma : SATAN SATAN SATAN!!! What the hell are they doing??? It’s so weird. Especially the first few rounds where they really make a mockery of the people who really believe they can sing. Some of those people have special needs or mental problems and they use them for ridicule, it’s almost like medieval times where they’d throw fruit at the fool. I dislike that immensely.

VP: Does anything you see on TV these days appeal?

Paloma: I watch TV once a month and its usually The Friday Night Project or Jools Holland. I’d like to be on one of those programmes… I am an actress too so I have appeared on TV a lot. I never see myself though!!

VP:If there was one performer past or present you could record with whom would it be?

Paloma: ANDRE 3000!!! Most definitely. I’d like to meet all the people he’s associated with too. He’s so innovative and never genre specific and that’s what I’d like to be..

VP:What was the last book you read, film you watched, CD you played

Paloma: I am a cinema fanatic! OBSESSED! I saw La Vie En Rose about Edith Piaff, I loved the actress who played her but I wasn’t that keen on the direction, I thought it jumped about too much. The best film ever made was 2046 by Wong Kar Wai. I am reading My Mother by George Bataille. It’s really fantastic. Very dark. I listen to a lot of 40’s r n b when I listen to music…. and soul/blues.

VP:What been the best advice you’ve been given and the worst?

Paloma: My mum said:
“Nothing is ever the end of the world”. That’s the best. However hard life can seem, time washes over things, time never stands still, it just keeps moving and you have to go with it.
“Do what you want whenever you want to“. Some drunken idiot said that. I don’t agree at all. Sometimes you have to think beyond the walls of your own mind and realise that your actions can affect others. You can’t always do what you want because it may upset people. It’s a really selfish way of living. You put in what you get out in life and if you disregard others, they will disregard you….

VP: There seems to be a jazz/burlesque/nostalgia type revival going on in recent years, why do you think this may be?

Paloma: Nostalgia makes people feel good. There are elements of hope in old things because they were born out of periods of struggle where hope was all people had. We can be so complacent now; everything is so disposable and impermanent. People are big hits one minute and hated the next… The thing about old music is that it transcends time. Timelessness is the essence of good art.

VP:Five words to sum you up?

She’s gonna be big, The “VPME” will keep the faith !

Footage Shot By Jenny Bettenson (Thanks! )