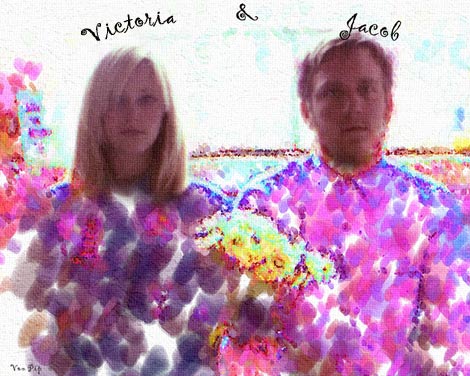 “With No Certainty” By Victoria & Jacob

If you have a penchant for pretentious, mystical sounding band names then it’s entirely possible that ‘Victoria and Jacob’ may not be the sort of collective appellation that would immediately grab your attention or appeal to your “inner snob”. However your initial opinion would surely change once you’re ears had been introduced to this wonderful duo’s beautiful, evocative, heartfelt music. The message they appear to be giving  in choosing to use their own names is that of an approachable down to earth couple who aren’t too concerned with pretension or cultivating a faux-cool  image- it’s the music that matters and thankfully it’s the sort of music that will melt your heart. Victoria’s poetic musings and languid vocals,( which at times bring to mind a rather less phlegmatic version of  Dubstar’s Sarah Blackwood) float around a dreamy, ethereal, multi-layered electronic soundscape that radiates beauty and warmth and taps another nail into the coffin of the school of thought that subscribes to the belief that  electronic music by definition, is cold and impersonal.  Maybe in this case the warmth and emotion stems from the fact that many of the synthetic sounds on their début are actually Victoria’s voice, looped, stretched and distorted out of recognition, then again, maybe it’s simply due to the fact that the  duo write songs of  rare,  fragile beauty.

Their songs may be suffused with a sense of melancholy  but they don’t come across as angsty, self obsessed little twerps who subscribe to the “woe is me, whinge-a-long” school of song writing,  for what is on offer  is much more subtle, nuanced, reflective and mature and as such is actually strangely consoling.  V&J’s first EP, ‘Super Computer’, was self-released in August 2008 and soon gained praise and support from Tom Robinson ( note to the Independent- that’s TOM Robinson not Baldrick) via his BBC 6Music show.  This was followed up  by the ‘In The Rough’ EP  which was again, self released in October 2009, and now their début single/EP ‘With No Certainty’ is set for release on 5th April 2010 on Voga Parochia Records. We were more than impressed and demanded (in the nicest possible way)  to know more …. we  discussed their influences, their name and their decision to ditch acoustic instruments and embrace the electronic vibe for an enchanting debut single.

VP:  As a collective name you must admit Victoria and Jacob  isn’t terribly rock n roll is it? Did you consider any other names, I dunno,  like The Electric Adverbs, or  Soundgasam 911  or some other such nonsense. Any really bad discarded names you’d like to share?

VICTORIA & JACOB: We didn’t consider any names before because we didn’t really care at the time and now we just like the way the initials spell VAJ. It means people know our names at gigs and it feels more personal. Although if someone had suggest Soundgasam 911 we would have probably gone with it.

VP: You’re new EP ‘With No Certainty” sees a slight departure from your earlier work, more electronic than acoustic. Any particular reason for this or was it just the way your music was going?

VAJ: Whilst we were studying electronic music at University making compositions based on stockhausen scores and creating multimedia installations, we were writing folk music, which was probably a response to the experimental music we were making. The folk sound then evolved into folktronica, which is when we released our first two EP’s. But we then realised that we wanted to define our sound and make it more comprehendible, which is why we ditched the acoustic instruments. We felt the computer allowed for a much wider scope of textual possibilities.

VP:The songs on the EP are all beautiful, but do seem to be drenched in a sense of melancholy and infused with regret …would you agree?  And what sort of themes inspire your music ?

VICTORIA: I wouldn’t say regret, but melancholy certainly. I find a beauty and kind of sympathy in that sort of music. Like a lullaby to small child, it’s very comforting.

VP:Who’ve you been listening to in the past twelve months?

VICTORIA: My favourite artist of last year was Burial, I can’t get enough of his music.  I would love him to do a remix for us.  It’s the vocal samples he uses that make it so unique, quite obvious lyrics but really repetitive and hypnotic. The beats have an urban feel, and all the crackly sounds have an almost otherworldly quality to them.

JACOB: I been getting into the work of Takagi Masakatsu, he’s a multimedia audio/visual artist from Japan who writes electronic music built from acoustic instruments and environmental sounds. It’s not dissimilar to early Four Tet. I’ve also been listening to a lot of The Magnetic Fields, I regrettably only discovered their 3 disc album 69 Love Songs last year, but its quickly becoming one of my favourite albums ever.

VP: What does 2010 hold for you? Anything exciting lined up?

VAJ: Our debut single is released on the 5th of April on Voga Parochia, that’s exciting and what may come as a result of it, it’s our first release on a label and we are looking forward to playing gigs where people know our music. Right now we’re currently working on our debut album in between playing gigs and promoting the single.

VP: Which side of music do you enjoy best, the writing, the recording or playing live …?

VICTORIA: All of it, but I do really enjoy playing live as it allows us to test out new ideas, and it’s always a challenge because it makes us think about different ways of performing the music live.

JACOB: Definitely the writing, gigs can be too much hassle, and recording can be monotonous and time consuming! I write at home, so I just make a pot of coffee and sit at my laptop, occasionally looking outside to check on the weather. I love the spontaneity and chance involved with writing, especially when the ideas start flowing out uncontrollably. When recording and playing live doubts start to creep in, and it’s then that I think an idea is shit, probably because it’s so final and there’s no going back.

VP: If we came back and interviewed you in say, 3 years time, what would you like to have achieved?

VAJ: We would have loved to do some shows around Europe, and toured a bit more, and just still be doing what we are doing now.

VP: There are so many ways to access music these days, streaming music with services such as  Last FM, Spotify, etc,  downloading such as I-Tunes and of course good old fashioned record shops. What’s your own preference in terms of how you consume music?

JACOB: I prefer to listen on iTunes and go to record stores in London and buy some vinyl on a whim, it encourages me to take a risk with something. I’m really trying to get out of the habit of downloading ten albums in a day and never listening to them, although downloading can be positive because it allows our music to be heard all around the world, and means one day we could go and do a show in Japan and people could know our music.

VP: Some kindly soul reading this interview falls in love with your sound and decides to give you a few  grand, on condition it’s spent on enhancing your ability to make music. How would you spend it?

VP: Everybody has a record or two in their collection that makes them say “What was I thinking”…now is your chance to confess to a past musical faux pas! You’ll feel better for sharing ;)

VICTORIA: I was listening to Heads High by Mr.Vegas on Spotify, and of course I wouldn’t buy it, and a friend told me to give 1995 back their tune.

JACOB: I still haven’t got over my teenage obsession with Pearl Jam, me and our producer spent a whole session once comparing the original of Ten to the remastered version.

VP: Five adjectives to sum up your sound would be…..

0 thoughts on “Two’s Company-Victoria And Jacob”