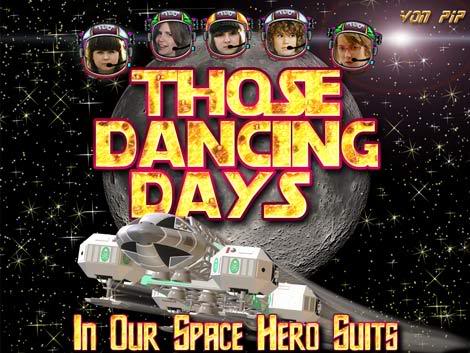 “Hitten” By Those Dancing Days

“Action Man” By Those Dancing Days

I was first alerted to Swedish pop sensations Those Dancing Days some 20 months ago by the gentlemen who run Tack! Tack! Tack!, a club night, specialising in Swedish Indie, pop and dance music. From the first moment Those Dancing Days infectious tunes found their merry way into my appreciative lug-holes I realised here was a young band with huge potential, producing a sound, which Nick from T!T!T! astutely described as “wonky pop.” Their song “Hitten,” Swedish for “The Hit”, created a huge buzz on the internet and Those Dancing Days rapidly became one of the most talked about acts to emerge from Sweden in recent years. The sound is a delicious mix of Northern Soul and C86 Indie Pop driven by jangling guitars and a pounding Hammond organ, that induces the desire to “dance like a stoned penguin” as Jason from T!T!T! once put it.

Initially I was under the misapprehension that the band derived their name from part of the title of a W.B. Yates poem which starts “Come, let me sing into your ear; /Those dancing days are gone/ All that silk and satin gear.” Thankfully old W.B. had got it completely wrong, Those Dancing Days aren’t gone, far from it, in fact they have only just arrived “carrying the sun in a golden cup and the moon in a silver bag” (to paraphrase Yates.) Continuing in a poetic vein I think it’s only appropriate that I also list my initial reaction to the band and their tunes in a somewhat lyrical, rhythmic fashion, therefore it would be fair to say I was “smitten by Hitten,” “had great fun with “Run Run” and of course am “full of praise for Those Dancing Days.” But maybe I should leave the poetry to the experts, eh?.

The truth is Those Dancing Days are a great pop group and their debut long player “In Our Space Hero Suits” is a vibrant, effervescent, dizzyingly exciting affair. The band have succeeded in building on the huge promise of their early demos/ EP and delivered a sparkling pop album that has enough Indie cool and pop hooks to satisfy music fans of every persuasion. The production is subtly employed and whilst it has undoubtedly expanded the bands sound it crucially retains their edge, and captures their spirit, energy and personality, factors that are sadly often sacrificed on the over-produced, soulless, conveyor belt of modern chart bound pop. Linnea’s voice has a richness and effortless style that belies her years, and possess that magical quality that would drive many to engage in Faustian pacts to attain such natural melody. In fact it would be no stretch to say that her voice contains more soul than an all-nighter at  Wigan Casino or a haunted house on Halloween, it is in fact, way cooler than a cryogenically frozen James Dean and his cucumber. The album itself is a triumph containing, not even the merest  hint of a  duff track , it’s one of those wonderful albums that reveals a new delight upon each play, tracks like “Run Run”, “Hitten”, “Home Sweet Home” and “Actionman” are proof positive that Those Dancing Days are “living for music” and provide “music for life.”  The band were in London last week and I spoke to guitarist Rebecka on t’phone prior to an in-store performance, about the band who have justifiably been touted as “ Sweden ’s next big thing”

VP: How did you all meet and how did the idea for a band come about?

REBECKA: Myself, Cissi and Lisa were in a band beforehand, I’ve known Lisa like forever, but we wanted to do something different and a bit happier so we asked Mimmi to join on bass. Lisa used to play bass but hated it! Linnea was in the same class as Mimmi, who told us she sang and we asked her if she’d join and sing for us.

VP: Where did the name come from? Is it from the WB Yeats Poem “Those Dancing Days” ?

REBECKA: The name actually comes from the Led Zeppelin song “Dancing Days,” Lisa is a big fan and we went through our I-pods looking at titles. “Dancing Days” came up and sounded good! Eventually it became “Those Dancing Days” which sounded a big name for such a little band, but we are now growing into the name maybe? The fact that’s it’s from a poem is good thing, poetic maybe!

VP: Over the last year or so there’s been a steady “buzz” growing on the internet. Is the “net effect” a huge help to young bands?

REBECKA: Yes the internet really did help us, I don’t know how it happened, and I don’t know how you got to hear about us, but we suddenly had fans helping and people talking about us. It was very strange but really good. Myspace is a great way to get your music heard, and it’s free!

VP: Your debut album is out soon, “In Our Space Hero Suits” what’s the meaning behind the title?

REBECKA: Yes the albums out in October, the title is from a line in a song originally. We kind a felt it suited how we felt, it reflected our mood, we don’t mean like heroes ourselves, but as a band when we finished the album we felt on top of the world, and very proud.

VP: You should be proud, the albums really is great..

REBECKA: Really? You think so? Oh that’s great, thank you

VP: So do you all like the same kind of music or do you have different tastes?

REBECKA: Well we all like some things, but also different music too. We are five different people and maybe we all bring something different to the band.

REBECKA: Not really, we respect each others taste, although sometimes we may say to somebody “Wellllll….maybe you like that a little more than us,yeah?” it’s good to have different musical taste I think.

VP: So who are your favourite bands/musical influences?

REBECKA: My favourites are The Smiths, I’m a big fan, I love Johnny Marr, we met the Smiths drummer once one drunken night! It was very cool.

VP: What do you think it is about Sweden that enables it to keep producing great pop music and bands?

REBECKA: Sweden ? I don’t know, maybe because when you are young you are encouraged to get into music and there are lots of lessons and access to instruments. And maybe we have a good heritage from Abba! Maybe also because Swedes are very shy and music is a good way of expressing emotion?

VP: Had any weird moments with fans yet?

REBECKA: I still find the weirdest thing is having fans, haha, I still can’t believe it. Like when we walk out and people recognise us and shout “hello girls.” But weird experiences? Well there was one guy in Germany who wouldn’t leave us alone, he was like “can I buy you a drink?” And we said “no thank you, we’re fine” But we wouldn’t leave us alone, he followed us everywhere, but we could handle him!

VP: Have people finally got over the age thing now?

REBECKA: I hope so, I think too many people talked about our age at first. People would say “yeah, they are young and are girls and cute” and I don’t really know what that had to do with the music. Maybe when we first started it was an issue as in some venues we were asked if we were old enough and our parents had to come with us, but we are nearly 20 now! I hope now people will talk about the music.

VP: And finally five words to sum up the album?

REBECKA: Err… Ok… mature, good, different, emotional and erm one more, its good to listen to whilst travelling, like in a car or on a train soooo…

VP: Mobile maybe or Roadtrip (is that two words?)

REBECKA: Hope to see you at a gig soon , thank you.

Big thanks to Holly & Karen from Radar Maker.

Unofficial Hitten Video ( This was actually TDD’s first presence on youtube, in Feb 2007, however it  got deleted for some obscure “youtube ” reason. Happily now it’s back as a piece of musical  history ;). As you can see I had a huge budget, but I did hear my ideas may have influenced the official version. So that means I’m like, great ! ;P
[youtube=http://uk.youtube.com/watch?v=aFmaGzd1zec]

0 thoughts on “We Could Be Heroes – Those Dancing Days Interview”