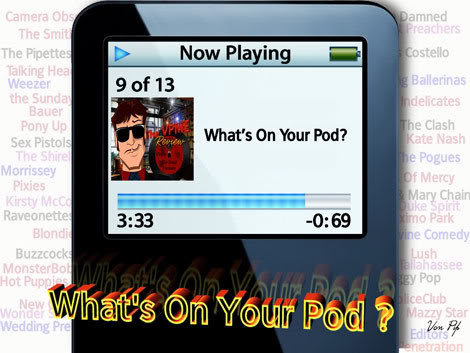 So whats on the VPME I-pod this month ? (in no particular order)

Operator Please – “Get What You Want”
Pure incendiary, deep down and dirty rock n roll – This is where its at ! A classic. This is a band who really should be as enormous as John Prescott’s waistline. Ripper, as they say in Oz.

The Pipettes –“Your Love For Me” (a new song from the Japanese Import Of “We Are The Pipettes”) sounds a little bit like what The Sundays may have produced if they’d have adopted a 60’s girl group vibe, and stopped moping around (and had three Harriets)-which is a good thing! Hurrah!

Millburn –“Wolves At the Door”
Somewhere between Arctic Monkeys, Sean Bean and Reverend And The Makers, there is Millburn, I can’t pretend I don’t like it, so i wont, I like it!

Róisín Murphy–“Dear Miami “
Ah Ms Murphy is back with a lovely slice of Electro/Disco/Funk, cooler than a chriogenically preserved James Dean, in an ice cream parlour, with the door left open, in Alaska, in January….

The Phantom Lovers- “Heroes And Idols”
This is their first single apparently, due out at the end of the November. A dark menacing gothicy vibe, with a layered sound that swirls around like the presage to some great foreboding revelation …she’s got a great voice and repeated plays really make this track grow on you. But is it bland enough to get radio play ? No, it’s far more interesting and therefore will probably get no airplay…

The Blue Smarties – “I Feel Like Ian Beale”
Anyone remember these little pop pixies ? The Pipettes should cover this lost classic about the unluckiest man in Albert Square. Mind you he was and continues to be, a Tw*t !

The Hot Puppies – “Clarinet Town”
This band just get better and better , from the forthcoming “Blue Hands” album- which I’m very much looking forward to. I just wish their gigs where easier to attend ;)

Siouxsie– “Here Come That Day”
Blimey ! No it’s not about Darren Days ex’s waiting to beat up the philandering little shit, it’s a storming return to form from the High Priestess of Punk, the best shes done for many moons, this time she remembers that sometimes songs can sound better with a tune-Great Stuff !

Screaming Ballerinas – “Jessica” (demo)
They can argue all they like, but this is a song Blondie would have been proud of, more hooks than Peter Pans nemesis and a fantastic vocal, hard to believe the tracks on here are essentially demos -Amazing!

The Bordellos –“Blank Letter”(bass version)
What would have happened if The Jesus & Mary Chain’s Reid brothers had let Bobby Gillespie sing and not bullied him into playing the drums ?-Possibly this, its raw, and conjures up the bedroom sleaze of early JAMC demos. From The Album “Meet the Bordellos” which contains the frankly disturbing ” These Boots Are Made for Stalking” ….

Babyshambles –“French Dog Blues” – Oh dear, I almost thought this was going to be good, the melody strains to escape, almost succeeds and then Pete says “Chien bleu” and thus ruins the whole song, as he sounds a complete cock, he’s no Serge Gainsbourg that’s for sure… And what the F*ck does ” I model lacklustre panicky in vain search for the remedy, No words only melody come, so I take the day off “????- What a load of pretentious half baked w*nk in a Tupperware box ! If that’s what’s considered by many to be modern day poetry then my name’s TS Elliot. Rhyming panicky with remedy is almost in the same class as when the world of pop bowed down to the genius of Billy Ray Cyrus when he rhymed “achy” with breaky ” -time itself was almost torn asunder and Stephen Hawking’s head exploded, due the complexity of such a rhyme ….I was indeed humbled…….Anyway the guitars aren’t bad, problem is, just as it promises to deliver it becomes all limp, flaccid and ultimately deeply unsatisfying, rather like bad sex….

The Real Tuesday Weld – “Last Words“- Now this is good, imagine if Paddy McAloon and the ghost of Billy McKenzie sang lyrics penned by Jarvis Cocker –  in Tin Pan Alley……It’s up on myspace for a free download too. I see there’s a penchant for pencil thin taches too ;)

The Duke Spirit -“Lassoo” (from the Ex Voto EP) . Magnificent, rollicking, epic sounding slice of blood and guts rock n roll . Its sheer quality transcends genre and in time it should rightly be regarded as a classic. Everybody should buy it !

0 thoughts on “Whats’s On Your I Pod”