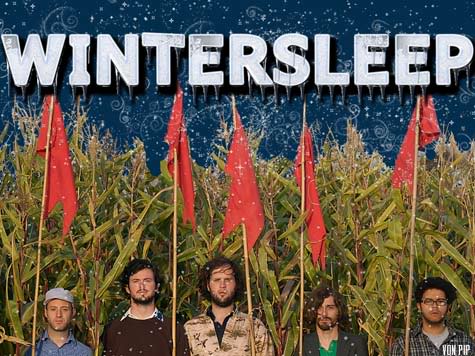 Wintersleep have been together since 2002 and their intelligent, evocative brand of Indie rock has attracted a sizeable fan base on the other side of the pond, where they regularly play to 1000+ audiences. The

y have yet to make their mark in Europe but their new album “Welcome To The Night Sky” (produced by Tony Doogan – Mogwai, Super Furry Animals, and Explosions In The Sky) looks set to change all that.  It’s an album which recalls early  R.E.M.(minus the pomposity), Arcade Fire (minus the strained vocals),  Kings Of Leon ( before they decided they wanted to be The Eagles, ) Radiohead and even a hint Snow Patrol (minus Mr. Lightbody’s recent plodding  stadium rock by numbers approach). Epic songs such as  “Miasmal Smoke and Yellow Bellied Freaks,” “Drunk On Aluminum” and “Murderer” demonstrate why Tom Yorke must be sleeping with one eye open, and are  just a few examples of why this album could be one of the breakthrough albums of 2009.

Wintersleep’s chief lyricist Paul Murphy certainly has a way with words; however his early exposure to music was fairly limited.  He’d listen to his parent’s classical records, a bit of Roy Orbison, maybe some Leonard Cohen.  His father then attempted to add variety by way of adding Simon and Garfunkel to the family music collection.  Alas after reading the lyrics to “Cecilia”, it was decided that Paul Simon was a pervert and was never to be played again,  granted it certainly does contain some disturbing lyrical content. “Making love in the afternoon with Cecilia/Up in my bedroom, /I got up to wash my face/When I come back to bed/Someone’s taken my place!” BLIMEY ! One can only assume Cecilia was some sort of insatiable nymphomaniac and the other chap was the ultimate opportunist, was he hiding in the wardrobe?  I mean the song’s narrator had only gone to wash his face for God’s sake!  One dreads to think what may have happened if he’d  nipped out for a newspaper?   Another huge influence came from literature and poetry, Kafka, Ted Hughes and Sylvia Palth all left an indelible impression on young Paul and this in turn led to him being drawn to the more literary songwriters, Leonard Cohen, Mark Lanegan, Thom Yorke, Bill Calahan, Morrissey, Nick Drake, Velvet Underground, Pixies, et cetera.  Despite releasing two previous, critically acclaimed albums in Canada “Welcome To The Night Sky” is the band’s first release in Europe. The band have three London shows in December  then  return to Europe in February 2009 around the time of the album release. We spoke to Paul about 2008 and the band’s plans for the new year.

VP:  You have built up quite a following in your native Canada and are about to tour Europe next year, after  a number of  London shows in December. So for the unenlightened what’s the story behind bands “conception”?

PAUL: I guess there was never really any heavy idea behind the band’s conception. I think it was just initially a way to write songs and record with friends.. We were in two different bands at the time. Tim and Paul [me] in a band called Kary [now defunct] and Loel and Tim in a band called Contrived [still active].. We made a demo in Loel’s apartment and people seemed to like it.. From there we decided to maybe do a few shows which turned into a tour to Ontario which turned into a cross-Canada tour, etc., eventually taking us to your lovely continent :)

VP:  “Welcome to the Night Sky” will be officially released in the UK  next year How would you describe the album, and was recording it an enjoyable process  ?

PAUL: The process was very enjoyable.. Feels like our first proper record. The first one we had a real budget to work with and that we were able to do in a 3 week block, a song a day essentially. Working with Tony was really fantastic. He brought a really amazing work ethic and taste. He really made us work, taught us alot. We’re really happy with the end result.

VP: Who would you say the band’s musical influences are?

PAUL: I think it’s pretty much all over the place.. Neil Young.. Led Zeppelin are a pretty huge influence on all of us.. Fugazi.. Radiohead. Hank Williams. Sonic Youth is a big one.. Dinosaur Jr…We like lots of music though.. Hard to pin it down to just a few so I’ll stop trying to..

VP: You’ve played alongside some big names in the past, what have been your highlights during your time together as a band?

PAUL: Wolf Parade in the US was probably one of the funnest tours we’ve been on.. A Wintersleep / Wooden Stars cross Canada tour.. Tragically Hip in the US.. We did a stint recently in the UK with Black Mountain that was pretty amazing. One of the shows in Bristol at a church was particularly mind blowing..

PAUL: I don’t know if it is the weirdest but recently, on this US tour we’re doing right now, we played a church rec center…… It was in Georgia, just outside of Atlanta. It was all fine and dandy until a few of the people in the band were taken aside by the promoter and told “no booze, no cussin’ and or mischief with the women” and that Jesus loved them and that he, the promoter, also loved them as a matter of fact..
After the show Mike and Tim and Jon went to a bar and met a police officer who loved hardcore music and racism apparently or Nazism or both [we can guess he liked both:)].. He liked them too, the guys in our band, and made them drink shots and listen to why Obama shouldn’t be president.. When he went to the bathroom they all left very quickly as you can probably imagine..

VP:  What’s the music scene like in Canada these days, any bands you’d recommend?

VP: 2008’s been a bit of an odd year, the credit crunch, the end of George W Bush, what have been your abiding memories of 08

PAUL: The election of Obama stands out. We were in Rochester that night. A really great night. Such an amazing thing..

PAUL: Seems to be lots of UK in the 2009 playbook……. working on a new record whenever we get the chance.

VP: What’s your opinion on how mp3’s, the net, I-tunes etc have changed the musical landscape?

PAUL: I think it definitely evens the playing field out a bit more.. independent music seems to be thriving more than ever.. A lot more access to really great bands that you’d never gain access to through more traditional mediums. I guess it makes bands have to be good live bands as you can’t rely on CD sales anymore….. maybe you never really could, I don’t know…?  Personally, I’ve become a bit more of an ADD type of listener. Just the fact that there are so many possibilities at your fingertips makes it more difficult for me to sit through a full record by one band…..maybe you lose a bit of intimacy in that way..

VP:  Five words to sum up your new album?

0 thoughts on “Walk Out To Winter-Wintersleep Interview”