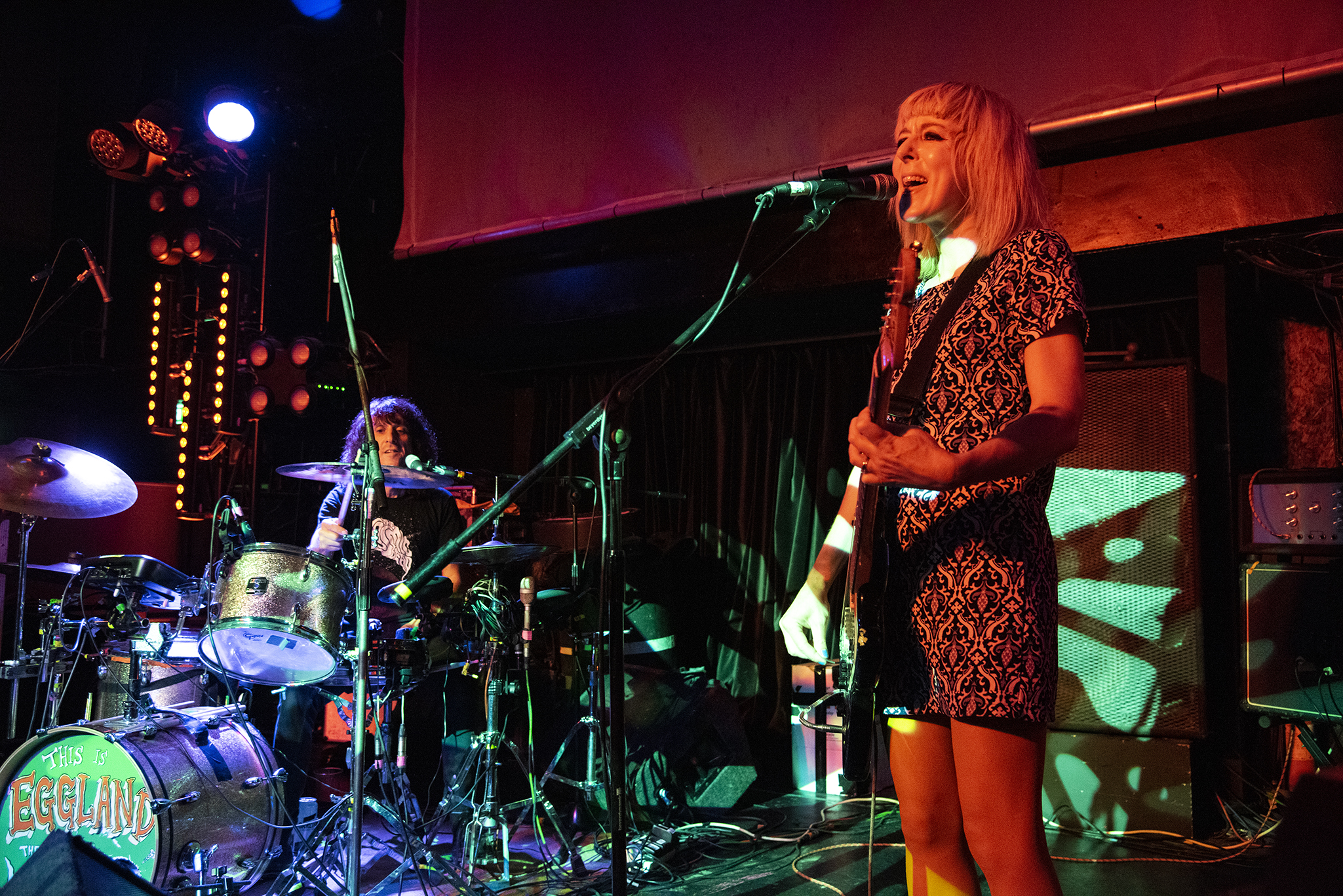 A live review of an actual gig.   Phil Greenhalgh goes along to see The Lovely Eggs and leaves feeling somewhat eggstatic

As on-the-spot made up genres go, ‘Cosmic electro Tribal Thump disco punk’ may not be the most catchy but may go at least some way to describing Brighton based duo AK/DK.

Buried too deep on the small district stage, the show-opening set was as analogue as anything approaching electronica gets, driving syncopated twin drum kits and synths that you had to punch to get to work properly, rather than any pre-programmed laptops, you get the feeling that valves feature somewhere in abundance, providing a raw, visceral and intense aural assault.

The bulk of the all-too-short set came from last years ’shared particles’ album, again tricky to compartmentalise in words… Gang of Four go mad on Krautrock? Fire up your generic streaming services, turn the headphones up to 12 and judge for yourself. Be sure to experience live at the soonest opportunity, their own headlining set sounds like an enhanced experience with the promise of more improvisation, I can see this heading off in all sorts of exciting directions without time constraints,

I’ve never witnessed obscenity physically blow a microphone before, so a first time for everything.Mancunian poet Matt Thick Richard cuts an unassuming figure until he opens his mouth, henceforth a stream of vitriol and bilious verse draws you into an angry and compelling shitstorm of spoken word.

The opening diatribe ‘Buy the ticket, take the ride’ about the demonstrable shitness of festivals on bad acid, ended with him forgetting the last part of the poem. Then having to explain to the audience, how he had to explain to someone that forgetting the second half of the poem was a part of the act. A Microphone replacement and a bit of shouting later we’re treated to ‘Medicine ball’ a bleak expression of preference for liking his rockstars dead; very few dead rockstars escaped the treatment, even Morrisey, who sadly isn’t dead yet.Drugs and Rock n’ roll boxed off, he covered sex with a short poem about ‘fucking’ provided a staccato description of a disappointingly quick shag and ‘Temporary Tourette’s unapologetically designed to offend and delivering in overflowing bilious bucketfuls, like John Cooper Clarke had swallowed a Profanisaurus. If profanity were rocket fuel he could be back up the M62 to Manchester before last orders, pausing only to fling some shit at Ikea on the way.

For reasons of self-preservation or abject cowardice, one line used at Gorilla Manchester at the start of the tour ‘If you hold a shell suit to your ear, you can hear Merseyside’, was missing from the set in Liverpool, but at least he still had the balls to have a pop at John Lennon.One to book to spice up your local poetry club annual dinner. Signed my book on the merch stand ‘Go Fuck yourself Phil’, and I just get the impression that he really meant it. 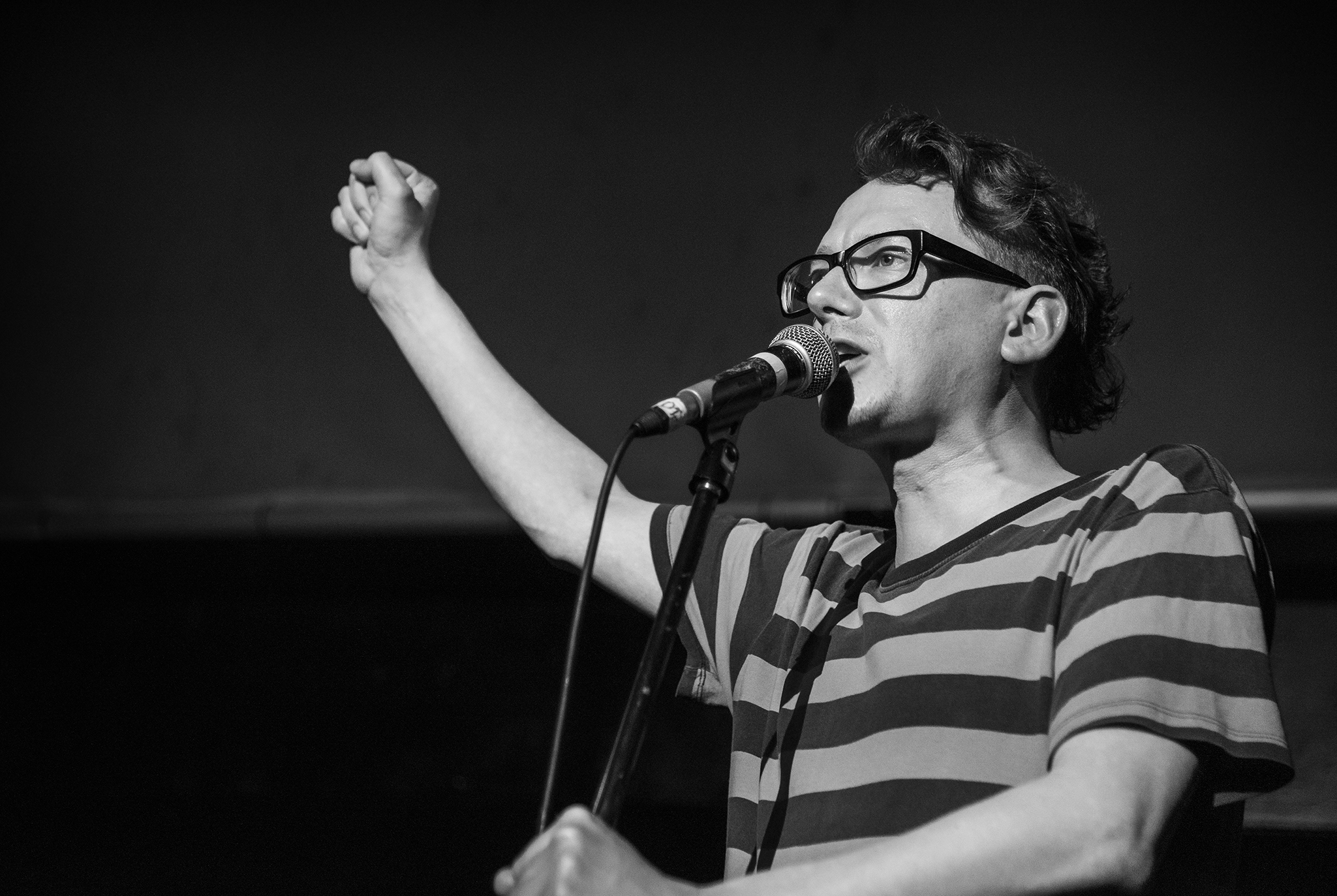 The Main Event – The Lovely Eggs 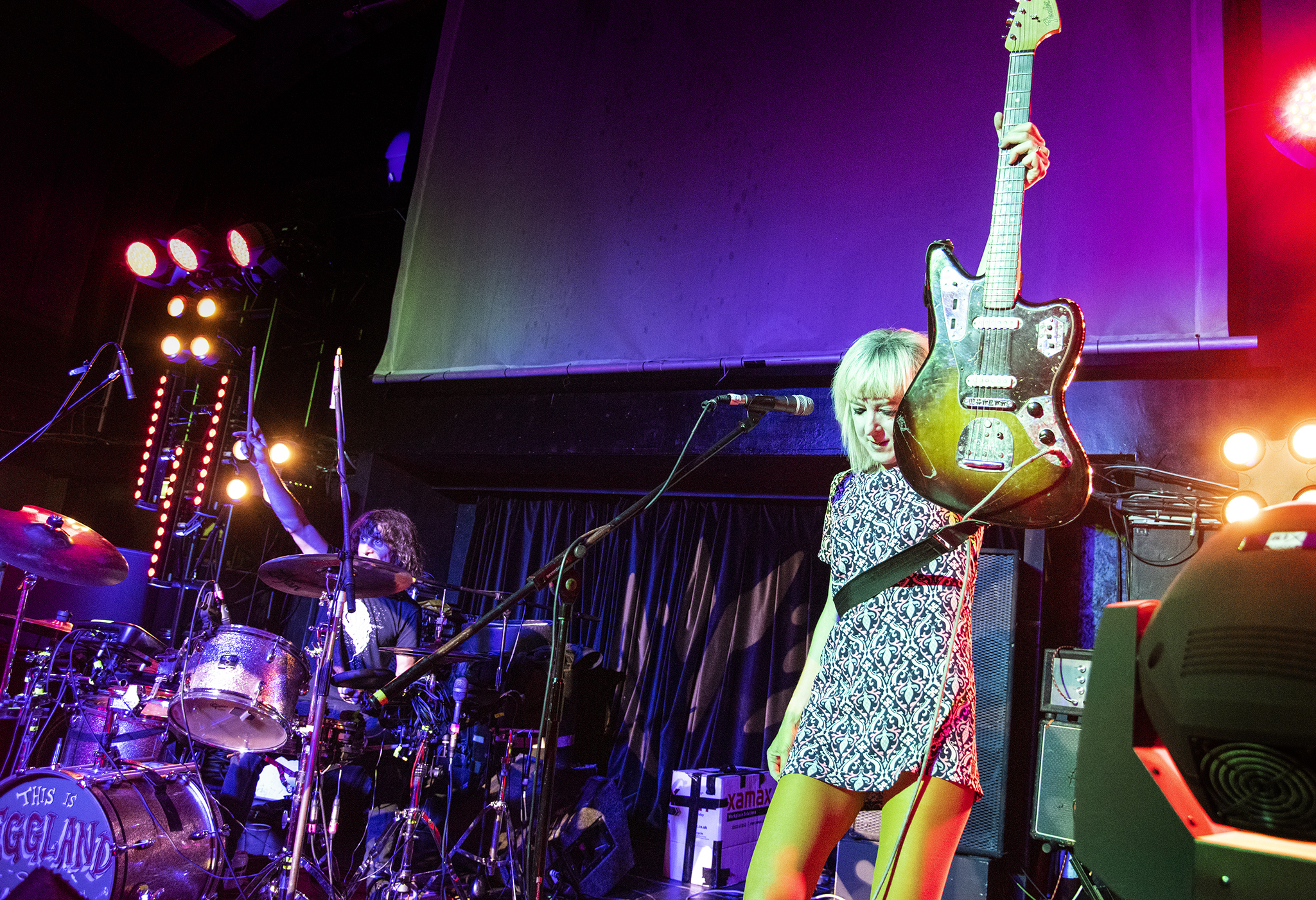 One silver lining to the cancellation of the original gig was a venue upgrade from the originally booked Phase One to the larger and more sonically pleasing District. Having had the shine taken off the tour opener with an early curfew at Gorilla in Manchester, District was a more fitting venue (as yet) still outside of the restrictions of gentrification allows for a bit of noise without the dampener of neighbours asking you to turn it down a bit, and being turfed out while it’s still daylight.


It seems mandatory to begin with the term ‘married couple’ in a Lovely eggs review as if the most conventional of institutions itself appears unconventional in the alternative band setting, But Holly Ross and David Blackwell are anything but conventional, playing up like a couple of teenage misfits, they are out to enjoy the fuck out themselves and doing thing s on their terms, and if you accept that, they seem genuinely happy to have you and everyone else along for the ride. The set is uncompromising, blistering at times, daft without being stupid in others. Funny and engaging doesn’t have to be twee, 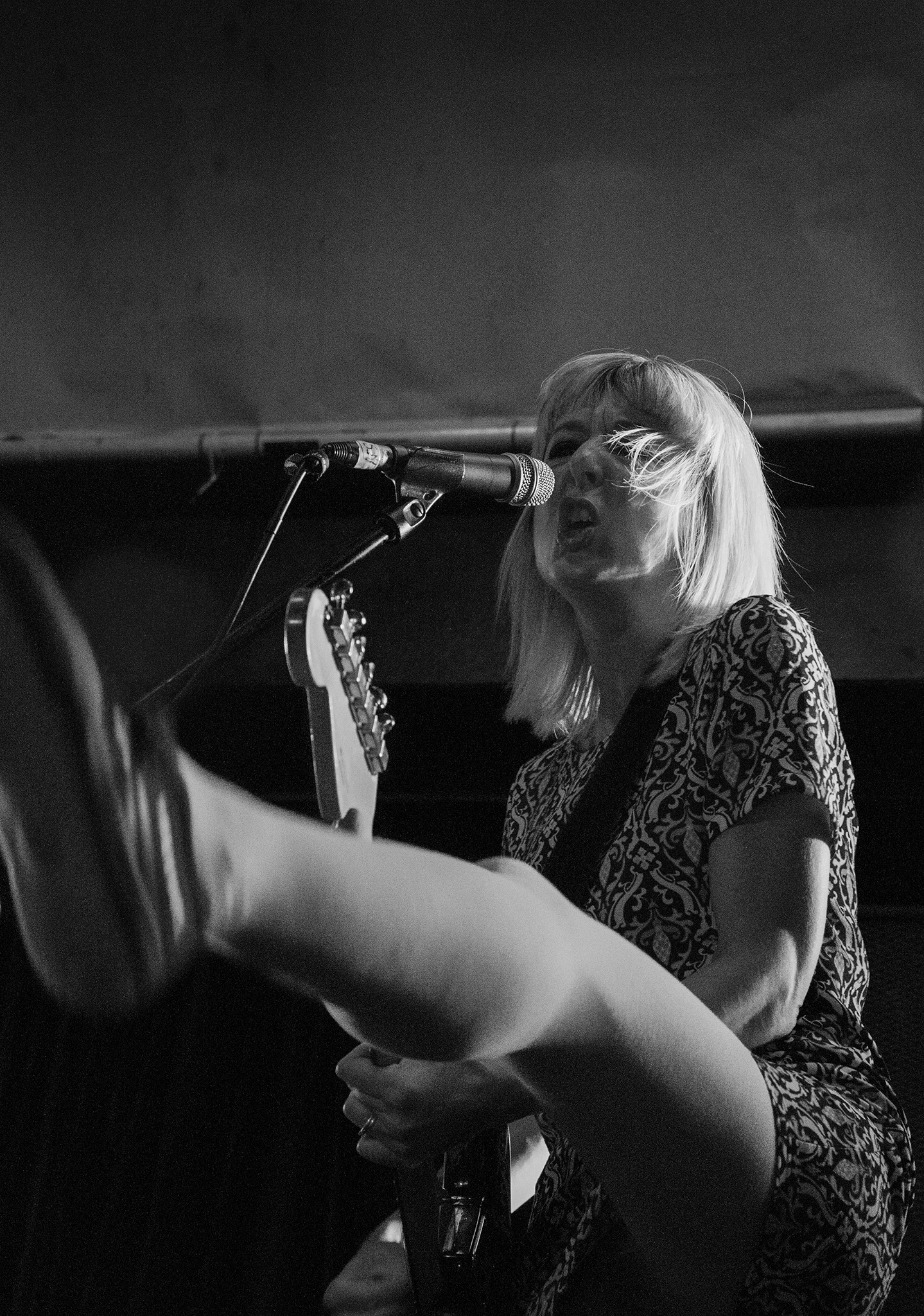 The set was heavily weighted to showcasing the critically well-received 2020 album ‘I am Moron’ that the tour was originally slated to promote, featuring 8 tracks from the album,

Opening the set as with the album with ‘Long stem carnations’ followed by the debut single from the album, the fierce declaration of independent thought ’This Decision’, then ‘you can go now’ a wry list of pet hates, with a lyrical update to add ‘Boris Johnson… you can go now’ The set stopped off en route at the minute-long ‘Digital hair’ which pokes you in the face and finished before you’ve had the presence of mind to react.Just three tracks (Witchcraft, Wiggy Giggy, and the set closer ‘dickhead’) featured from the sublime psych-punk classic ’This is Eggland’ (unquestionably one of the finest albums of the last decade) had me kicking myself that I didn’t catch the Eggland tour 3 years back to hear more of it. 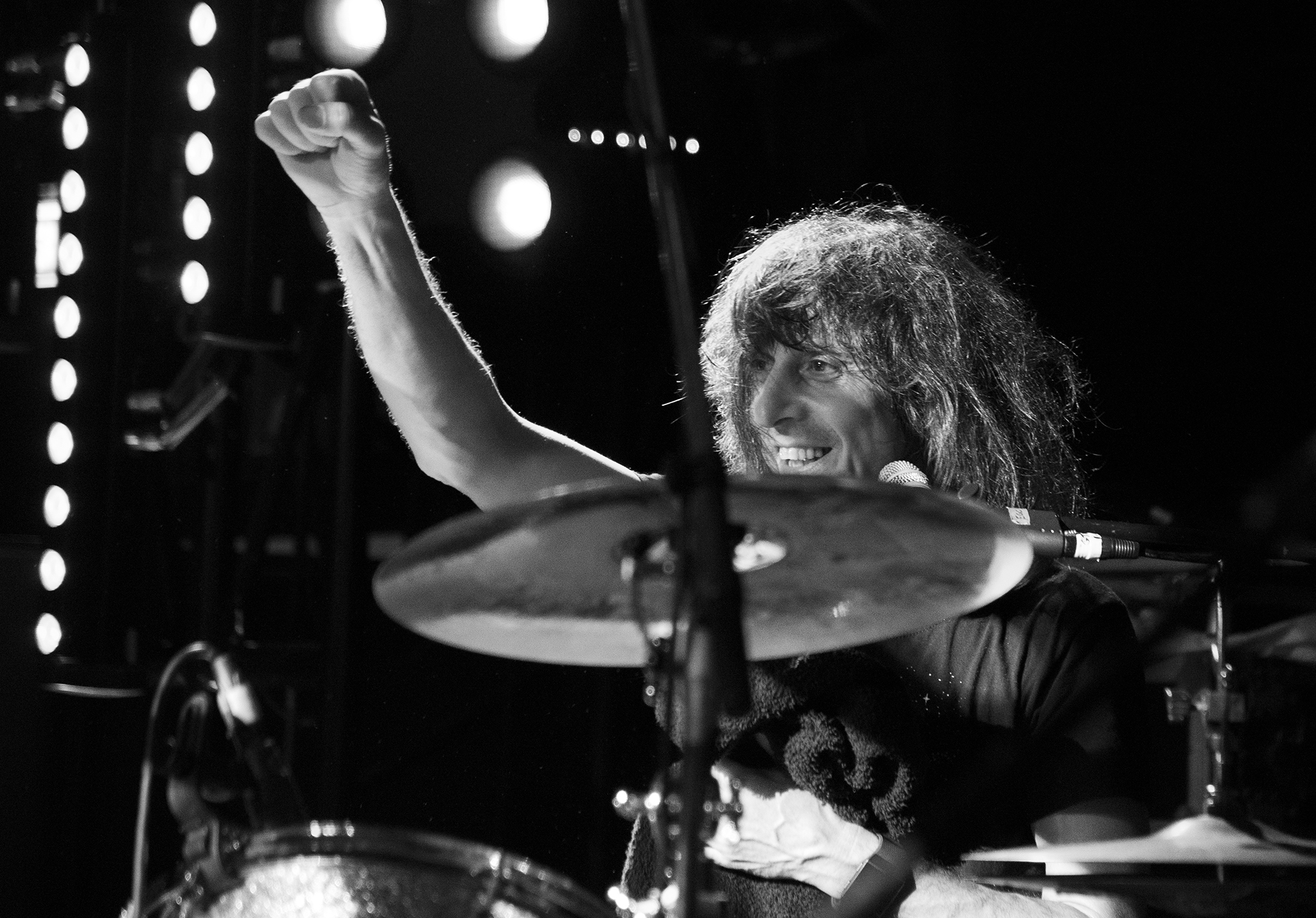 It may be a fair observation to separate the Lovely Eggs oeuvre into pre-and-post-Eggland: The first Four self-produced albums positioned the Lovely eggs as arbiters of self effaced honesty for humanity, holding up a dirty cracked mirror to the absurdity of modern life, brutally honest tunes like ‘people are twats’ (sadly not in tonights set) delivered with a wonk-punk DIY rawness, though more John Shuttleworth than John Lydon. Then the last two albums, Dave Fridmann-produced ‘This is Eggland’ and ‘I am Moron’ seemed to be the catalyst for the band discovering the loud pedal and injecting some power into proceedings. It is intriguing how New Yorker Fridmann (having worked with the likes of Flaming Lips and Mercury Rev amongst others) embraced the quintessentially northern Britishness of the Lancastrian duo.  But whatever bizarre chemistry or witchcraft was at work, it whipped up the quirked signature content into a relentless psych swirl without compromise. It was almost a sense of relief to see this delivered so well into the live performance. It’s a lot of layered noise for a duo to carry off but it works as well on stage as on the lurid coloured vinyls they’ve released over recent times. Clear crowd favourites ‘Fuck it’ and ‘Don’t look at me (I don’t like it)’ we’re of the 4 songs featured from the first 3 albums, Fuck it scarves and sausage roll thumbs held aloft by an appreciative and lively Liverpool audience, who gladly indulged in some beautifully choreographed crowd surfing, and some shameless middle-aged moshing. 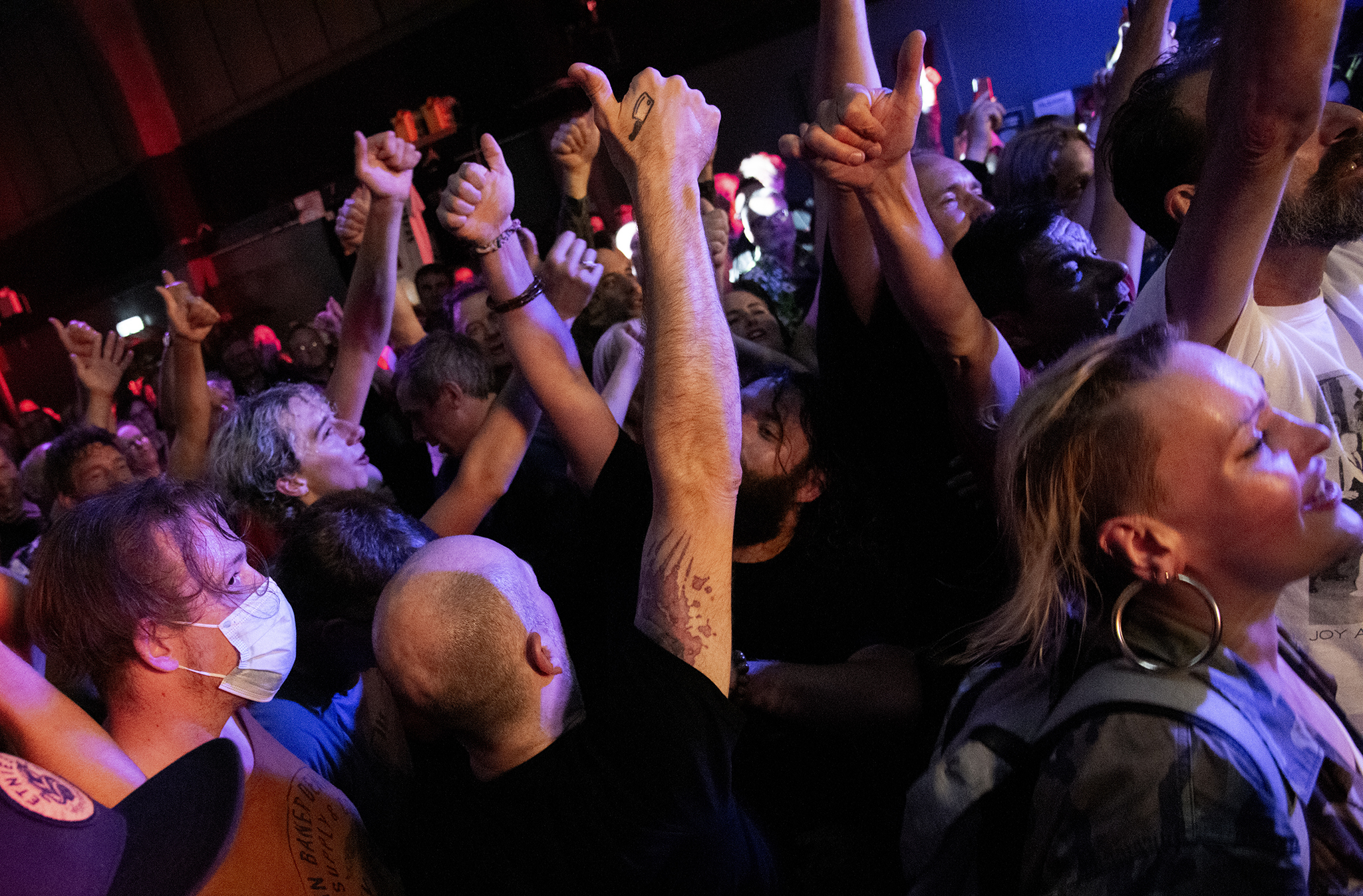 They of course played only 2021 single release ‘I, Moron’ (confusingly not on the ‘I am Moron’ album), an infectiously daft hi-tempo reprise of ‘I am a moron’, weaving madly around Iggy Pop’s guest vocal of simply repeated the word ‘Moron’ in his inimitable drawl, just as a timely reminder that we are all morons, living in moronic times, surrounded by other morons, doing moronic things. And so everyone leapt about like the morons they are and lapped up every yak yak yak of the chorus.

The set closed with another slice of introspective caustic power punk ‘Dickhead’ an anthem to being an outsider and proud of it…  And just like that, It feels great to be a citizen of Eggland.

Save for a few festival appearances, it’s now next April/May 22 before the eggs are back on the road and gigs scheduled for last year are fulfilled, including their next Merseyside appearance at Futurama festival. Dates are already selling out, well worth getting some in the bag now.

If you are unfamiliar with their back catalogue, ’This is Eggland’ is a great starting point, work your way in any direction from there and prepare to become intoxicated, challenged and enthralled in equal measure, like the audience in District, you’ll do it with a manic grin. 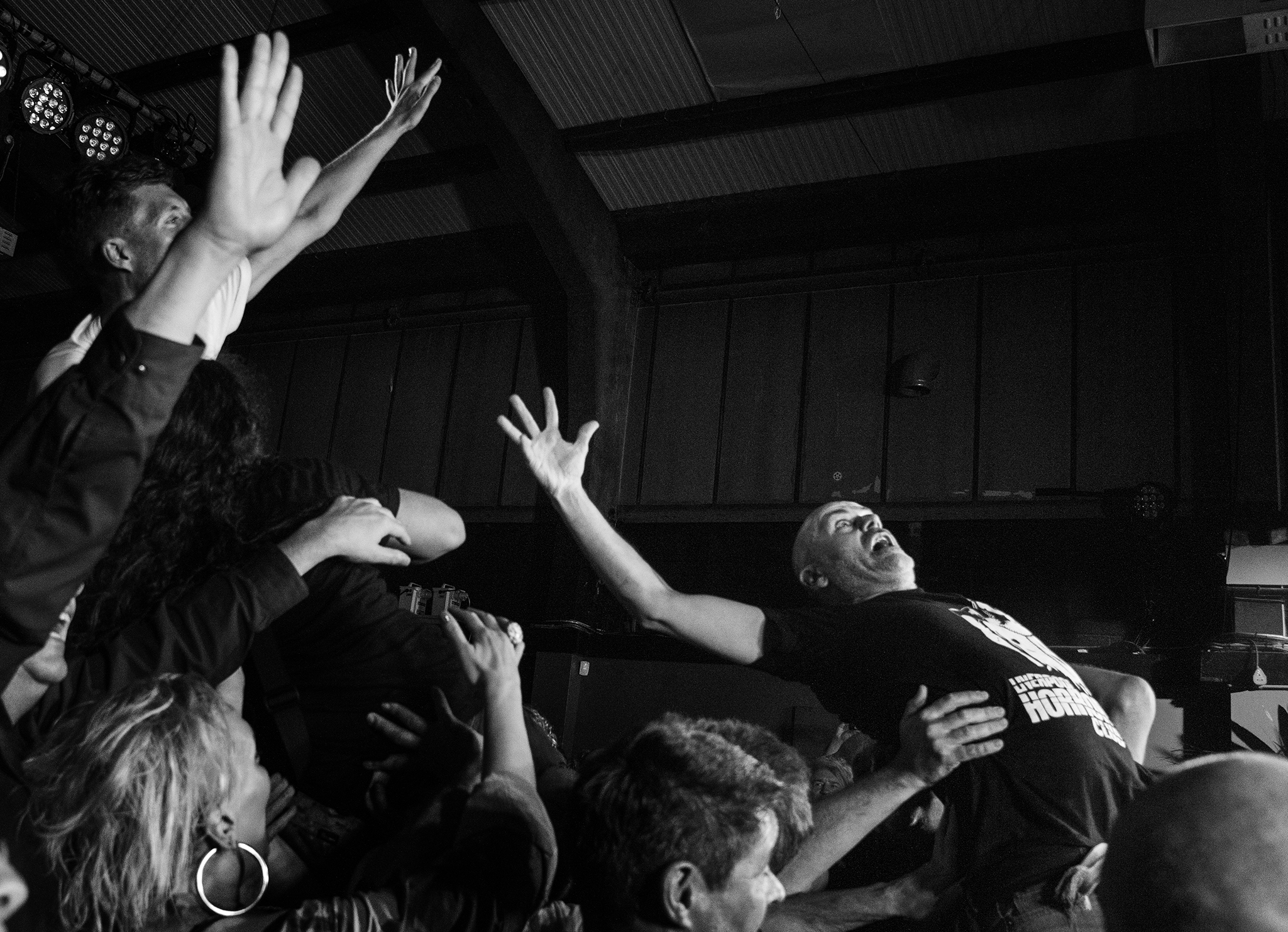 Words and Pictures By Phil Greenhalgh