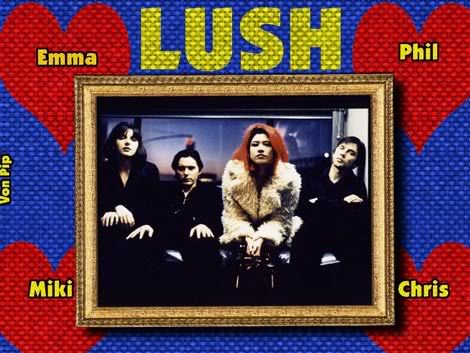 “I Have The Moon” By Lush

One of the Nineties’ most unusual indie bands, sprang from a friendship formed, at 14, by Londoners Miki Berenyi and Emma Anderson. As they put it “music was it“. After learning the ropes in other bands “Lush” was formed with Mikis then boyfriend Chris Acland on drums and Steve Rippon on bass (later replaced by Phil King )

So whats it all about ?? “We were kind of punk rock in one way”, says Emma Anderson. “We did think ‘Well, if they can do it, why the fuck can’t we?’ Basically, our idea was to have extremely loud guitars with much weaker vocals. And, really the vocals were weaker due to nervousness – we’d always be going ‘Turn them down! Turn them down!’.” “We started by writing crappy riot grrl anthems,” says Berenyi, “which was probably charming in a juvenile way. But there was a very rapid shift from the minute we started to write for records. The music, the lyrics became much more thoughtful and expressive, more important, really. I remember that change beginning when Emma wrote “Thoughtforms”, it certainly made me think I needed to get my act together.”Often pigeonholed as part of the so called “shoegaze” genre , In reality Lush always had a poppier edge and were probably more akin to The Primitives and The Sundays.

The bands biggest commercial success with their final album “Love Life” ironically could well have been their undoing . Miki descrbes writing songs for the “LoveLife” album as”a kind of ‘give ’em what they want’ thing. Of course, my idea of commercialism is still a long, long way from other people’s. “Ciao!” may be a lilting duet with Jarvis Cocker but it’s still basically two people telling each other to fuck off.” This success led to pressure to “break America” but alas the sheer volume of shows and the travel led to frustration and bad feeling Chris Acland, was ordered to rest by his doctor, and returned to his parents’ home in the Lake District. Anderson, dissatisfied with the direction , called a meeting and announced her departure. “It was total overkill,” says Anderson “I felt like a product being shoved down people’s throats. It felt soulless.” “Everyone was sick of touring,” says Berenyi “and Emma said she didn’t want to go through anything like the Lovelife experience ever again. She thought we should continue without her but I said no way. Things were left at that with no definite decision. Being the eternal optimist, I believe it was rocky but it would have continued, gone in a totally different direction. Then two days later we heard about Chris.” At his parents home – Acland had hanged himself.

“For me,” says Berenyi “That was the end. There was no way on earth I could have gone on with Lush without him, because I always firmly believed that without his benign influence Emma and I would have torn each other apart years ago. Not to mention the obvious fact that he was one of my closest friends ever and there was very little else I wanted to do without him, for that matter. So I guess to Emma the end was aready in sight. For me personally, it was Chris’s death, and Chris’s death only that finished Lush. I enjoyed being in the band immensely, I’m glad I did it. But that really was a full stop, his personality was such a major part of the band.”

A tragic end to a young life , and to a fantastic band . The record “industry” should realise that music isn’t just a product ..music means more to the fans and the bands than simply a profit margin….yes I know the record company has to make money but at what price??? …..one day they might actually listen……