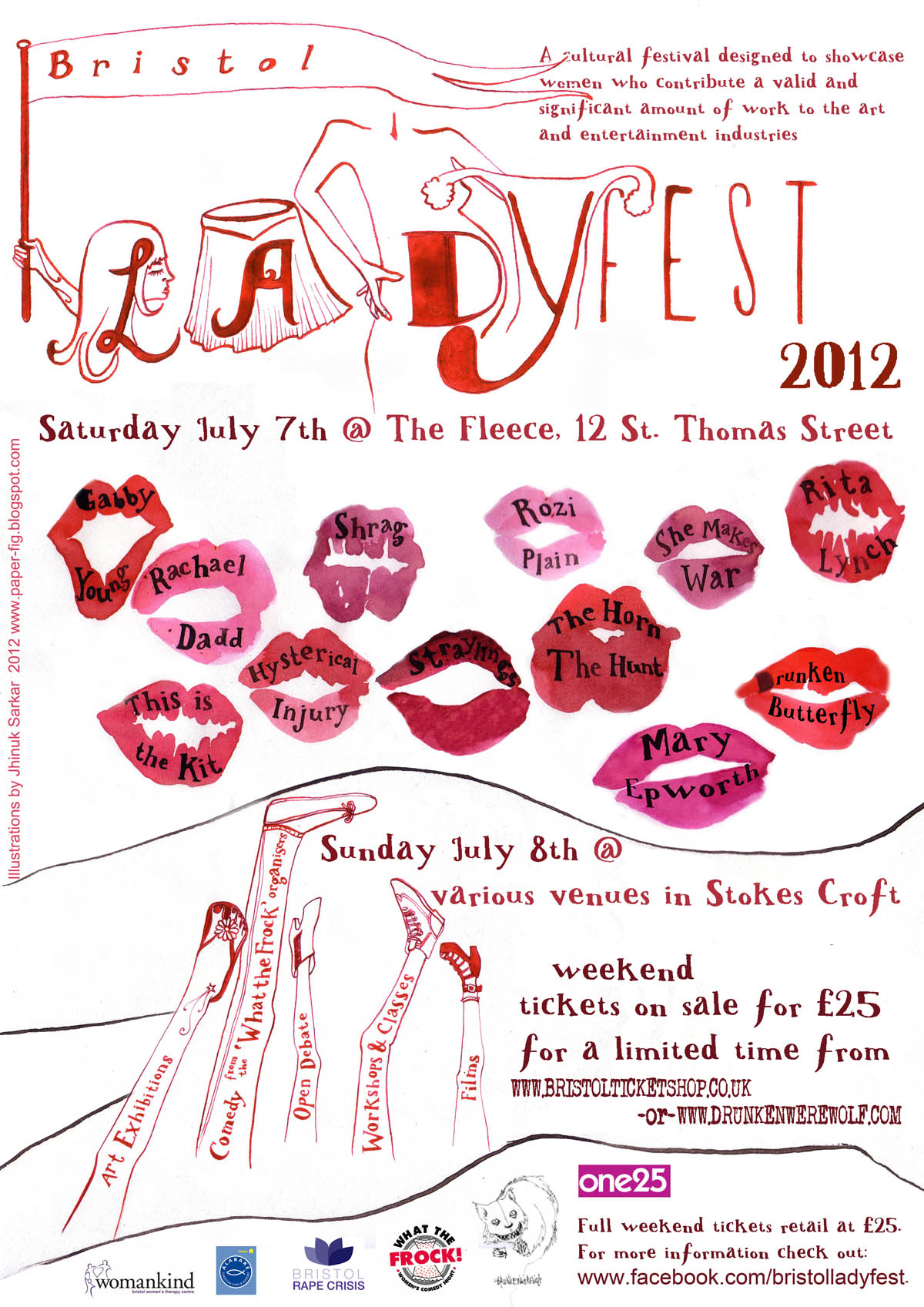 We don’t normally post a lot of news, gig announcements etc, but there are exceptions. For one it’s our blog chum Tiffany from Drunken Werewolf  curating this event and for two we are wholeheartedly behind any events that encourage greater gender equality. ( I mean those dinosaur sound men at some venues for starters, which charm school did they go to ?)  Oh and for three it features quite a few bands we’ve highlighted on The VPME.

Bristol Ladyfest will run this year from 7th to 8th July at various venues across the city. An internationally-recognised cultural festival, the primary aim of the weekend is to celebrate the creative work of women and to encourage greater gender equality within the arts and entertainment industries.

The first ever Ladyfest took place in Olympia in 2000, attracting over 2000 attendees and featuring high profile musical acts such as Sleater-Kinney, Cat Power and Gossip as well as films, art and workshops.  The impact of this event was colossal and is still felt, with hundreds of successive Ladyfests being organised around the world, from across Europe, to New Zealand, to South Africa.  The first British Ladyfest took place in Glasgow in 2001 and multiple events have been organised in the UK each year since.  Bristol has hosted Ladyfest twice, in 2003 and 2007.

Profits from this year’s event will be split between four charities, all of whom make an invaluable contribution to keeping the streets of Bristol safe:

Our music day! With a line-up courtesy of local new music blog DrunkenWerewolf, all performances will be held at The Fleece from 2pm.

DRUNKEN BUTTERFLY: Since local trio and Riot Grrrl fledglings Drunken Butterfly recruited a drummer their music has hit momentum, grinding out a deadpan flutter to hard and heavy riffs. They’ll open our show. (14:00)

GABBY YOUNG: Fresh from from touring her new album The Band Called out for More and independent of her band Other Animals, Gabby Young will play an exclusive and intimate set to reflect her spellbinding music. (18:00)

HYSTERICAL INJURY: Bath heroes and pioneers of the local punk scene, Hysterical Injury are a sure crowd pleaser and excellent testimony of the South West’s musical credentials. Catch them play songs from their debut album Dead Wolf Situation! (19:40)

MARY EPWORTH: Through the critical acclaim of her debut album Dream Life and confirmed appearances at Hop Farm and Bestival, Mary Epworth will play her most intimate show of the summer under the banner of Ladyfest. Don’t miss her galactic performance! (20:30)

RACHAEL DADD: Well known to the local scene and practiced on the national area, Dadd has toured with the likes of Laura Marling, Alessi’s Ark and Sons of Noel and Adrian, but her ethereal folk is independently strong enough to ensure a standout performance of the night. (16:40)

RITA LYNCH: Punk session legend and Bristol resident Rita Lynch will be there to pack an anti-folk shaped punch, growl, spit and all. (14:40)

ROZI PLAIN: Following a stellar performance at this year’s Great Escape, Rozi Plain may have departed for the capital last year, but she’s nevertheless kept contact with her once hometown; and her beautiful, haunting songs tell the tale. (17:20)

SHRAG: Brighton based five piece Shrag are steadily working their way around the country promoting their new album Canines, out now on Fortuna POP! Typical of their labels sound, they make bedroom pop to shout home about: full of the Riot Grrrl and punk attitude that influences them. (21:20)

STRAYLINGS: Channelling the sultry sweet howl of their debut Entertainment on Foreign Grounds, Straylings may not be the best known act on this list, but by the end of the night they’ll be one of the most celebrated. (16:00)

THE HORN THE HUNT: Once included in the fated witch house tag, Leeds band The Horn the Hunt transcend their scene to create haunting electronica with a gothic lick. Goodness knows what will happen, but whatever does – it’ll be a spectacle to behold. (15:20)

THIS IS THE KIT: Headed by Kate Stables, This is the Kit have been a staple of the Bristol and Winchester music scene since their formation in 2006. Now confirmed for The National’s ATP and in possession of a strong live recommendation from The Guardian, they’re sure to capture hearts and minds as our headline act. (22:20)

Focusing on practical and visual arts during the day, the festival will be rounded off with a comedy line up curated by What the Frock! from 7pm at The Lanes.

ALL THAT I AM and THE PINK/BLUE DIVIDE: Two short animation films from up-and-coming Brighton artist Sarah Julia Clark. (11:00 @ No 51 Stokes Croft)

DREAMS OF A LIFE: A celebrated drama bio-epic by Carol Morley, focusing on the life and death of Joyce Vincent, who died in her bedsit in North London in 2003. Her body wasn’t discovered for three years, and newspaper reports offered few details of her life – not even a photograph. Starring Zawe Ashton. (14:00 @ No 51 Stokes Croft)

INVISIBLE CIRCUS: NO DRESS REHEARSAL: Taking a detailed look at the Stokes Croft art scene, Naomi Smyth’s documentary offers an inspiring and engaging hour and a half. Bristol Culture and Amelia’s Magazine agree, citing “Naomi’s film is a look at one of the most exciting stories to happen in Bristol in recent years and she was in a unique position to document Invisible Circus supremo Doug Francis and his cohorts as they let their imaginations run riot.” (13:00 @ Art House)

SILENT SCREAM: Not to be confused with the anti-abortion propaganda of the same name, this insightful Female Genital Mutilation drama-documentary won the Young Voice Award at the BFI in 2012 and has since been aired at conferences across the city. (11:00 @ Art House)

THE FUTURE: Written by and starring Cannes alumni and one-time Kill Rock Stars spoken word artist Miranda July, The Future takes the same odd approach to everyday life as her award-winning debut Me and You and Everyone We Know, transforming a simple story of growing up into something magical and empowering. (12:00 @ No 51 Stokes Croft)

WHO TOOK THE BOMP: A tour documentary from the legendary, pioneering band Le Tigre. (15:00 @ Art House)

BRISTOL ROLLER DERBY ENLISTING: The sports collective talk recruitment and what it means to be involved in the sport.  (10:00 @ Hamilton House)

DESIGNER VAGINA: Run by Zoe Collins, this workshop promises an insightful discussion on body exploration and how women view their lady parts. Women only. (12:00 @ Hamilton House)

EMBOSSING CLASS: Bristol artist Jan Martin will teach a select group the art of embossing – complete with lady themes and designs! Places are limited, so come early to guarantee a space.  (14:00 @ Hamilton House)

FEM101: Bristol Feminist Network’s Sian Norris and Anna Brown will introduce you all to the work of their organisation and how you can get involved with feminism in the area. They’ll also discuss feminist in a wider context. (13:00 @ Hamilton House)

FLOWERING ARRANGING CLASS: From Flowers of Stokes Croft! Participants are encouraged to take their flowers home with them. (15:00 @ Hamilton House)

LOVE PILGRIMAGE PROJECT: Brought to you by Georgie Huntley and Sophie Rogers, two of the artists displayed in our exhibition room, this is an exclusive chance to design your own broach in the name of love and sisterhood. (13:00 @ Hamilton House)

THE MUFFIA: Katie O’Brien and co head a body positive workshop discussing and debating the female form, with a performance to reflect findings at the end. Women only. (10:00 @ Hamilton House)

ONE25 and WOMANKIND DISCUSSION GROUPS: Two of the four charities we’re raising funds for, Womankind and One25 will host an introduction to their work and take you through the feminist issues that surround life on the streets of Bristol. (12:00 @ Art House and Hamilton House respectively)

WHAT’S A LADYFEST: Manchester Ladyfest’s Susan O’Shea will chair a discussion on the cultural significance of Ladyfest, the impact it has on the art and entertainment industries and how we can contribute as individuals. (11:00 @ Hamilton House)

Other events and performances:

PING! TOURNAMENTS: Ping! provide free table tennis to all and sundry, and throughout the day they’ll have female-only tournaments set up across the Stokes Croft area. (@ Bear Pit, Canteen Bar and The Attic)

OPEN MIC POETRY: SOPHIE BUTCHER and LIZ GREENFIELD: Plus others performing poetry in the exhibition area at Hamilton House (from 14:00)

A collection of art, ranging from embroidery to stencilling and comic work, jewellery, postcards, cupcake cases and handbags! With much of what’s on show for sale, the exhibition area will be held at Hamilton House and open between 10am – 5pm.

Featuring the work of:

MENTALITY PROJECT OPEN DEBATE BOARD: A chance to visualise feminism, in all of its many forms! Come along and contribute to this community art piece.

DRUNKENWEREWOLF: Ladyfest’s very own, pick up a free copy of Issue 23 here, featuring interview with The Spinto Band, Hospitality, Evans the Death, Empty Pools and Slowcoaches.

RISK & CONSEQUENCE: From London-via-Cheltenham, Risk & Consequence is fast becoming an important name on the streets of the capital, with a regular club night and management system already in tow. Get Issue 2 here for free.

PRINCESA PIRATA: A Bristol based small queer/anarcha feminist distro with a love for cycling and all kinds of D.I.Y.  The distro stocks zines, comix, badges, patches and variety of things made from re-used materials.

Your compeer for the night will be the hugely talented Rosie Wilby, and she’s introducing an absolutely packed bill. So please welcome to the stage Elf Lyons, Zahra Barri and the side-splitting double act O’Shea & Ogilvie. For more details about the acts and the event, please keep an eye on www.whatthefrockcomedy.co.uk, where biographies and pictures will soon be posted.

Now on sale through: DrunkenWerewolf, The Here Shop and Bristol Ticket Shop

Weekend tickets: retail at £25 subject to booking fee. This will get you full access to all of Saturday and Sunday’s events.

Day tickets: retail at £15 subject to booking fee. This will get you full access to all of the events held on that day.

Note all events are subject to change and Bristol Ladyfest does not take responsibility for artistic license. Spaces at workshops will be limited and to ensure entry to popular events you must arrive at the venue early.