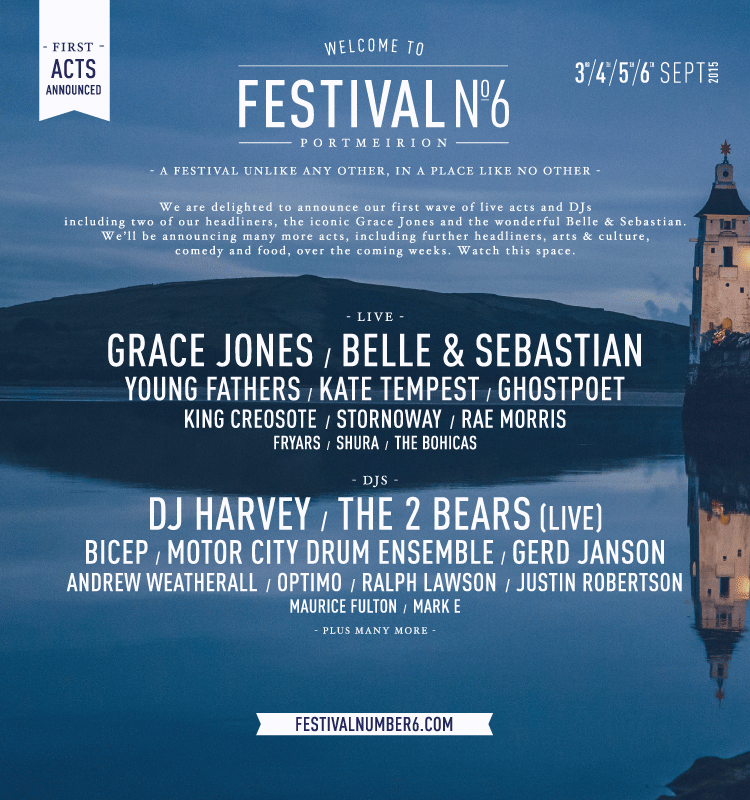 Award winning Festival No.6 has today announced the first two headliners for this year’s festival – Grace Jones and Belle & Sebastian.

Headlining Saturday night are indie pop darlings Belle & Sebastian. Currently enjoying rave reviews for their ninth studio album ‘Girls in Peacetime Want to Dance’, their set promises to be an upbeat and eclectic journey through their 19 year career.

Also topping the bill is singer, songwriter, model, actor, enigma and legend Grace Jones. Her live sets are duly renowned as nothing short of incredible jinking from disco to funk, pop to punk wrapped in a visual spectacular as stunning as the musical artistry. It will certainly not be a performance to miss.

Other confirmed live acts include Rae Morris, Shura, Stornoway, The Bohicas and Fryars. The festival will be announcing a second wave of artists including the final headliner in the coming months.

Equally renowned for its electronic bill No.6 is proud to unveil it’s first DJ line-up including headliners DJ Harvey and a UK festival exclusive from the 2 Bears with a live set.  A third headline DJ will be announced in the next wave. Other confirmed DJs include Bicep, Motor City Drum Ensemble, Gerd Jansen, Andrew Weatherall, Optimo, Ralph Lawson, Justin Robertson, Maurice Fulton and Mark E.

Festival director Luke Huxham said: “We’re tremendously excited about this year’s festival. Our first wave of artists and DJ’s is stronger than ever and there’s a lot more to come including our third main stage headline act, another headline DJ and a big second wave of live acts.

“We have a huge amount to announce on the culture, arts and food side of the festival which is an increasingly important part of the No.6 experience. There are also a few surprises up our sleeves – I think it’s safe to say it’s going to be our best festival yet.”

Festival No.6 is an intimate, bespoke banquet of music, arts and culture, taking place over the weekend of the 3-6 September in the magical village of Portmeirion, Wales, home of the cult TV series The Prisoner. With many more music acts including an additional headliner, a huge arts and cultural line-up, new venues and Michelin starred-chefs yet to be revealed the forth Festival No.6 is certain to be the most impressive to date.