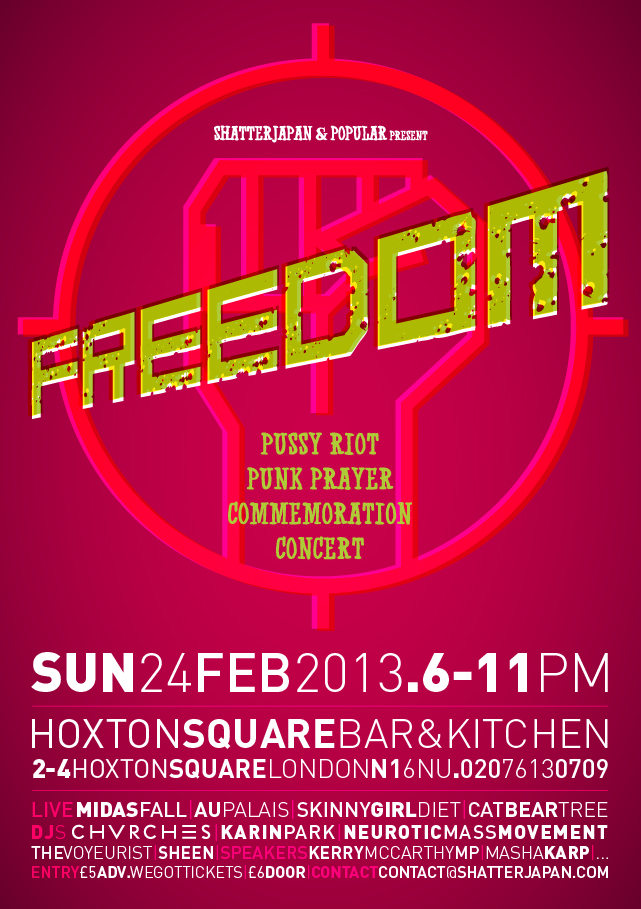 On 21 February 2012, members of the Russian punk band Pussy Riot performed a “punk prayer” in a Moscow church for which they were arrested, detained for several months and eventually sentenced on 17 August 2012 to 2 years imprisonment. With two of the three members remaining imprisoned (Nadezhda “Nadya” Tolokonnikova and Maria “Masha“ Alyokhina), SHATTERJAPAN (www.shatterjapan.com) and POPULAR (www.popularcompany.co.uk) have collaborated to create a whole evening of entertainment, including people from the international music, film and political worlds, to commemorate the 1 year anniversary of the punk prayer performance and to celebrate freedom of expression.  With 4 live bands, 5 DJ sets by bands, and 3 speakers, the night promises to be a non-stop stream of music and culture, with artist participation from Canada, Sweden and all across the UK.


AU PALAIS (www.aupalaismusic.com): Au Palais are a brother-sister duo from Toronto operating in London.  They are currently completing their debut LP, an expansion of their dark, brooding, pop music that they first revealed on their Tender Mercy EP.

SKINNY GIRL DIET (www.skinnygirldietband.tumblr.com): SGD are sisters Delilah and Ursula Holliday, and Amelia Cutler. One of the most exciting new all-girl bands in the UK, these Riot Grrrls know how to roar!  “It would be easy to link the girls to the Riot Grrrl movement and its recent resurgence, but the band take as much inspiration from bands like Dinosaur Jr and The Ramones as they do Bikini Kill and L7.” (Dave Rowswell)

CAT BEAR TREE (www.facebook.com/CatBearTreeBand): Deriving their name from a kick ass cat and a cowardly bear, Cat Bear Tree are a London-based trio whose indie, melodic, sometimes poppy, sometimes punky tunes nod to indie alt acts like Sleater-Kinney, Electrelane and Warpaint. They’re currently gigging across London and beyond whilst preparing for the release of their debut EP.

CHVRCHES (www.chvrches.tumblr.com): This brilliant Glasgow electro band are set to take the UK by storm, having recently made it to the last five in the BBC Sound of 2013 poll, and are about to embark on their headlining UK tour. The music world is CHVRCHES’ oyster. Lead singer Lauren Mayberry joins us on this special evening. Lauren also co-founded TYCI, a collective run by women with a blog, zine, radio show and monthly live event in Glasgow (www.tyci.org.uk)

KARIN PARK (www.karinpark.com): Swedish electro genius Karin Park released her fantastic album “Highwire Poetry” in 2012, a year in which she supported Gary Numan and enjoyed a UK headlining tour. Karin brought the house down with her DJ set at Hoxton last year – we’re looking forward to her shaking that roof again.

NEUROTIC MASS MOVEMENT (www.facebook.com/NEUROTICMASSMOVEMENT): This seminal London band plays with clichés and transforms ordinary ideas into savage beasts, never afraid to make fun of themselves and their immediate environment. Their EP “EMPIRE OF TIN” will be released end of March 2013.

SHEEN (www.facebook.com/sheenband): This London band’s multi-layered, psychedelic, reverberant soundscapes marry the ethereal brilliance of Sigur Ros with the discordance and sonic annihilation of My Bloody Valentine; the analogue dynamics of Pixies with the spatial and textural panorama of Broken Social Scene.

KERRY MCCARTHY: Kerry studied Russian, Politics and Linguistics at Liverpool University. Elected as the MP for Bristol East in 2005, Kerry is now a Shadow Foreign Minister. Her portfolio includes human rights, migration, international crime and the drugs trade, as well as UK relations with China, the Far East, South East Asia, India, Bangladesh, Sri Lanka, the Caribbean, and Latin America. Kerry is a member of the All Party Parliamentary Group on Russia, and as part of her work on human rights she attended the Pussy Riot trial in Russia in August last year. Since the imprisonment of Maria Alyokhina, Nadezhda Tolokonnikova and Ekaterina Samucevich, Kerry has been working closely with the Performers’ Alliance and is one of Pussy Riot’s strongest advocates in the UK.

MIKE LERNER: Mike Lerner is a 2012 Academy Award-nominated producer/director (documentary “Hell and Back Again”) and co-producer/director of 2013 Sundance award-winning film “PUSSY RIOT – A PUNK PRAYER”. Over the course of six months, Lerner and Maxim Pozdorovkin filmed this documentary feature, telling the incredible story of the three Pussy Riot members Nadya, Masha and Katya who were given a two-year prison sentence for their 40-second “punk performance.” With unparalleled access, the film looks at the real people behind their now-famous colourful balaclavas. We will screen a clip of the exclusive footage at this event.

MASHA KARP: Masha Karp is a trustee of Rights in Russia and a London-based freelance journalist with a special interest in relations between Russia and the West. Masha was Russian Features editor (1997-2009) and a producer (1991-1997) with the BBC Russian Service.