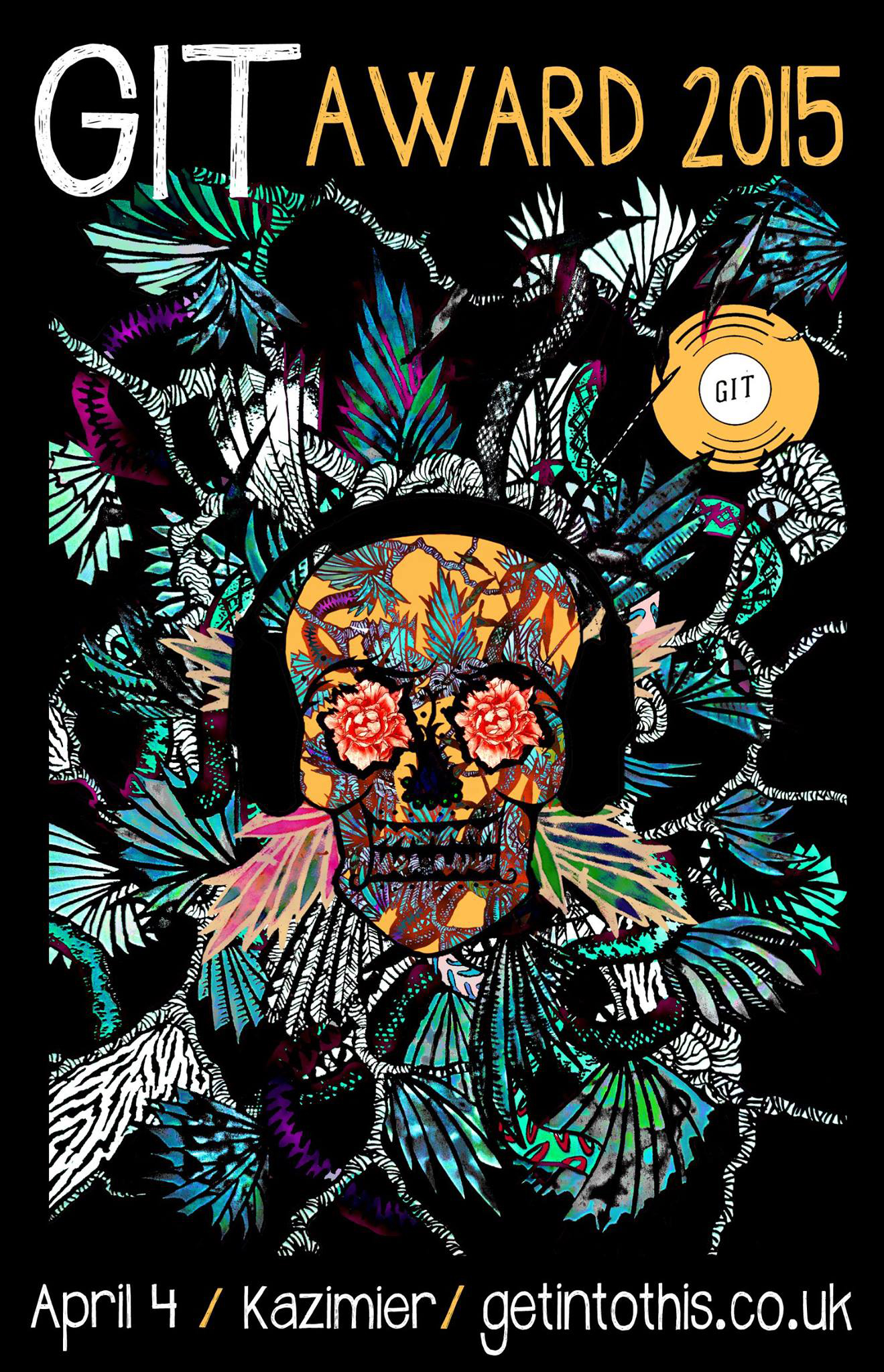 It’s easy to be dismissive with regard to music awards, indeed the ones at the grander end of the musical spectrum where the great and the good gather to be embraced by faceless bean counters should be viewed through the prism of wry cynicism.  As we all know, they are essentially more about ‘shifting product’ than artistic merit.

However, at the grassroots level there is a completely different emphasis, it’s tough out there and we believe that local scenes should celebrate their achievements and praise those who support or create innovative and interesting music.  Despite what the press and politicians tell us there’s far more to life than GDP and a spurious “economic recovery” based on slave wages. Creativity isn’t some sort of escapist indulgent luxury, it’s actually a fundamental human need and one that helps us make sense of the world and our place in it.  Despite the continued threat of gentrification, and dubious noise abatement legislation the Liverpool music scene continues to thrive often against all the odds.  The dark days of replicating the jangly Merseybeat sound on board that eternal and infernal ferry across the Mersey are long gone and Liverpool’s GIT (Getintothis) Awards are back to celebrate the new breed of musicians who have been making waves over the last twelve months.

This year’s ceremony takes place at the at The Kazimier on Saturday April 4th 2015 at 7PM, with the venue being transformed into an Aztec Jungle alongside special one off collaborative performances .

The nominations are as follows

And you can listen here

The organisers have also got together a pretty heavyweight judging panel, including some of our favourite record labels (Bella Union, 4AD, Heavenly), as well as new music champions such as our mate Shell Zenner from Amazing Radio, and the always excellent John Doran from The Quietus.  People who give a shit. 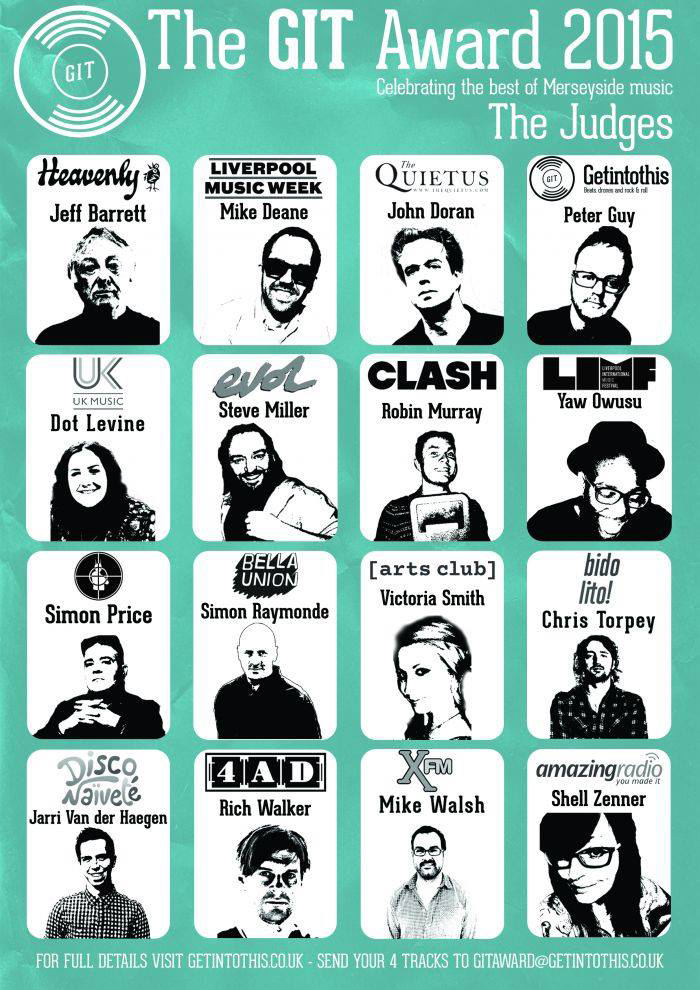 So what makes the Liverpool scene so interesting at present?  Well there’s no point asking a local as you’ll generally get a response not dissimilar to  ‘Cos we’re boss, laaaaaah’ so we asked a couple of out of town judges Shell Zenner (Amazing Radio) and Dorothy Levine (Music Week) to share their thoughts on the Liverpool scene.

Shell Zenner: “I’ve attended the GIT Awards for the last couple of years and have always been passionate about the ethos of the Award.  I’m always keen to see what will unfold and to educate my ears to the new sounds of Liverpool.  Liverpool has always been a magical place for me, you literally never know where you’ll end up…  watching creatures from the deep crawl along the floor between bands during a show at the Palm House in Sefton Park, experiencing a psychedelic tv installation at the Camp & Furnace during Psychfest or even devouring a Pizza Dog whilst jumping up and down to Islet playing live in the back of Maguires Pizza Bar.

The thing about Liverpool is you never know what you’re going to find, but you know you will find treasure.  The jewel in the North West’s crown!”

Dorothy Levine:   ‘It’s been a huge honour taking part in the 2015 GIT award – there was a lot of great music to choose from, it was tough to choose only 12!

You only have to look at the final list, to see just how diverse and special the music coming out of Liverpool is now.  Liverpool is a truly music city, full of music lovers and music makers, and this award honours them.  From solo acts, indie, rock, and pop, there is a real buzz around the music emerging from Liverpool, and this list is the tip of the talent iceberg.

There is a real sense of city patriotism and pride – artists and creators collaborating and helping each other – and that’s not just for music.  From designers and photographers, the full creative spectrum is alive and vibrant in Liverpool.

The city thrives on its music scene and celebrating the best music coming out of the city is a great thing.  From this award, to Liverpool Sound City, there are some great stages and opportunities for local talent.  From its venues to music business, from schools to bands, Liverpool is a massive cog in the UK music industry.’

Here’s how it works

The winner of the GIT Award 2015 will be revealed, as mentioned on Saturday 4 April 2015 at The Kazimier in Wolstenholme Square.  Like previous years, the winner will receive a specially commissioned trophy and cheque for £1,000.

Having relaunched for the fourth year at Liverpool Music Week in November 2014 up until the closing date at the end of January 2015, the GIT Award judges met on six occasions, discussing more than 330 eligible artists and bands, before carefully whittling them down to just 12.

Those 12 will now feature at the industry showcase on Saturday 4 April 2015 and will include performances from the shortlisted artists plus a dramatic aftershow featuring live music, DJs, and specially produced set piece spectacles.

This year, a specially commissioned Merseyside team will transform the unique setting of the Kazimier into an Aztec Jungle while 50 lucky souls will also have the chance to log on to the Kazimier website and obtain a pass to this once-in-a-lifetime occasion.

Also on the night, a special Inspiration Award, recognising services to Liverpool’s music industry will also be presented.  Previous recipients are Africa Oye (2014), Hillsborough Justice Collective (2013) and The Kazimier (2012).

Bella Union boss and GIT Award judge Simon Raymonde, added: “The waiting is almost over.  The GIT Award shortlist is now finalised – and what a near-impossible job that was!  You have 12 outstanding talents, all equally deserving of the Award.  Quite how we will whittle this down to one I don’t know but the good news is that whoever does win will be a beacon of light for all future artists from the area.  April 4, The Kazimier – enter it into your phone now.”

GIT Award founder and chair of judges, Peter Guy, said: “The GIT Award 2015 shortlist represents a new phase in Liverpool and the wider region’s artistic development; these artists are creating new sounds quite unlike any other and surpassing most other cities in the world.  This year there’s 10 brand new names on the shortlist selected by judges who travelled from all corners of the UK to Liverpool to listen to them and deliver the final shortlist – it proves what a vital time in Merseyside music’s history this truly is.  Saturday April 4 at the Kazimier is set to be another monumental occasion.”