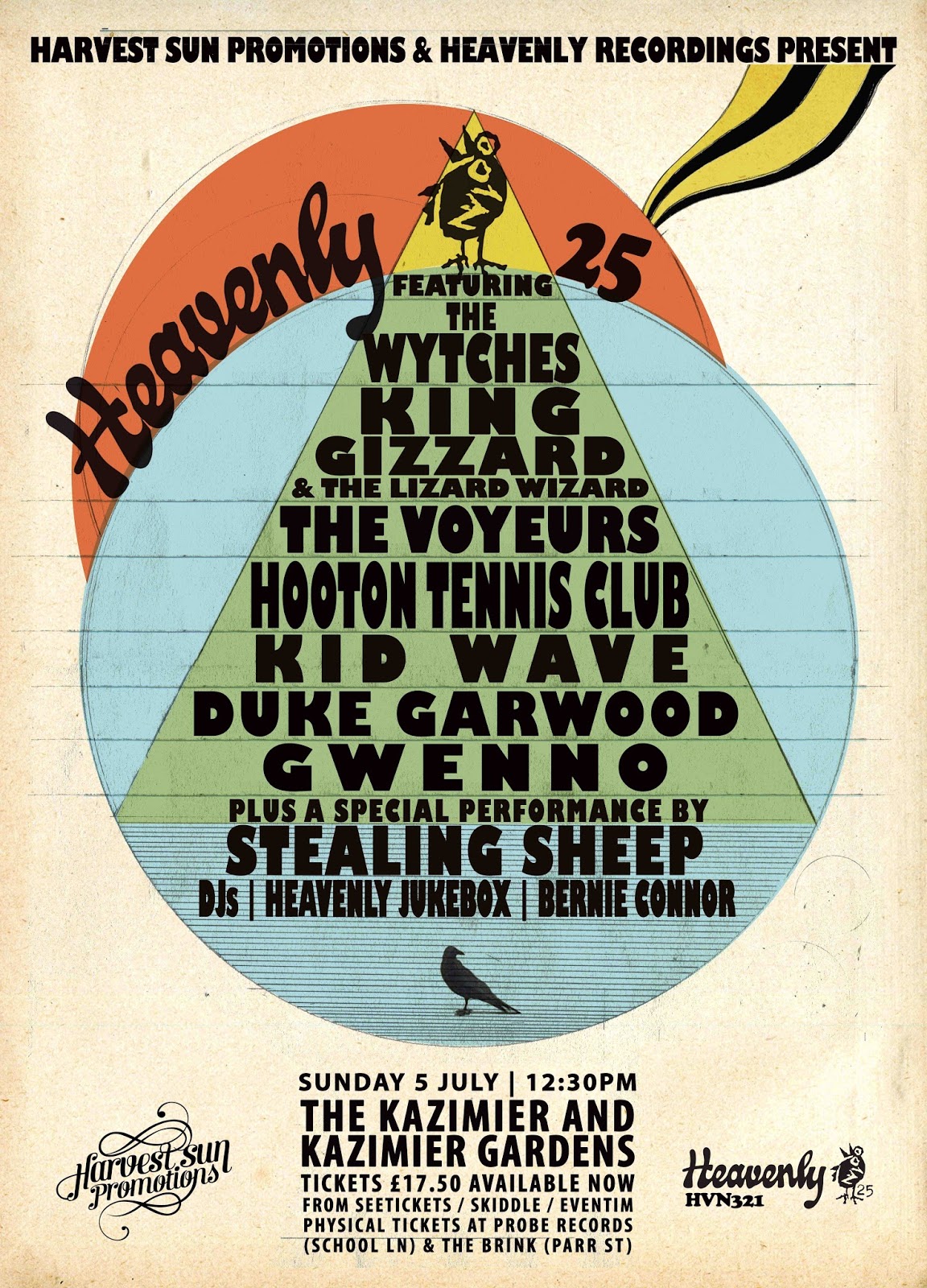 Heavenly Records is celebrating it’s 25th Anniversary this year and to mark the occasion there’s a whole day of fun and frolics scheduled to kick off  at Liverpool’s legendary  Kazimier and Kazimier Gardens in Liverpool from 12 pm on 5 July. It promises to be a very special event indeed !  ( Tickets are available HERE )

Founded by former Creation Records publicist Jeff Barrett, Heavenly Records is woven into the fabric of our youth and indeed record collection, so it’s time to take look back at some of our favourite moments from their past as well as highlighting the amazing new talent on their current roster.  And it’s this new breed who prove  that Heavenly Records look set to retain a place in the music-loving public’s heart for many more years to come.

In no particular order

The first and still the best Manics song for us (alongside Motorcycle Emptiness), confrontational and shocking it starts with a Public Enemy sample (from Count Down To Armageddon) and ends with a sample from The Skids Charles and in-between sounds like a fusion of the New York Dolls and The Clash. It was also the sound of a new generation (terrorists) giving the finger to all that had gone before.  A potent, visceral youthful stream of anger and energy rather than a coherent manifesto which highlighted the bands no holds barred, and (at the time) naive iconoclastic attitude. It also gave us the infamous John Lennon line, which seemed more like an exercise in seeing just how far they could go in taking down the old order rather than a personal attack, but many considered it to be beyond the pale and it is tellingly not sung when the band now perform it live. However, it  remains a classic.

St Etienne – ‘Only Love Can Break Your Heart’

This was the first Heavenly Records single we bought, and at the time we were unaware it was a Neil Young cover, (d’oh)  in fact, we assumed St Etienne were a couple of arch French dandies with a British vocalist. It was also a song that caused many an argument as it is still retrospectively assumed this is Sarah Cracknell on vocals, it was, in fact, a one-off vocal appearance by Moira Lambert (Campbell). Moira had toured with  (Richey Manic faves) Slowdive  and Lush and also co-wrote Paul Oakenfold’s hit ‘Skin On Skin.’


We have to admit we never had much truck with the baggy scene, often populated by knuckle dragging lads with haircuts that were more Moe from the Three Stooges than Iggy and The Stooges, who seemed to swagger about with the gait of a chimp wearing  a nappy full of porridge. However, there are some exceptions.  After starting life on Heavenly Records Flowered Up were signed by London Records alas, the hits were not forthcoming and the band’s insistence on releasing the 13 minute plus epic ‘Weekender’ saw the label finally loose patience. A deal was worked out which saw the unedited song released back on Heavenly Records.

The band were somewhat erroneously dubbed the ‘cockney Happy Mondays,‘ then again if you have a deranged dancer as part of your stage entourage, in this case one Barry Mooncult, who often dressed as a giant plastic flower, the comparison was perhaps inevitable. ‘Weekender’ did become something of a going out anthem back in the day, with a vocal that sometimes fell somewhere between Shaun Ryder’s stoned mumble and Mark E Smith’s lager induced two fingered slur. Sadly front man Liam Maher died of a heroin overdose in 2009, followed by younger brother Joe who passed away in 2012.

Beth Orton – ‘She Cries Your Name’

This beautiful song was our first introduction to Beth Orton and her ‘Trailer Park’ album is one of those rare albums that actually improves with age. We can only conclude she was either ahead of her time or we’ve matured!  In many ways, for us at least, Beth brought folk-tinged music kicking and screaming into the 20th century, tore off it’s Arran jumper and gave its bedraggled unkempt beard a rather nice trim.

A chugging bluesy psych juggernaut, and something of a lost cult classic from nineties Liverpool outfit Big Kids. Led by Edgar ‘Summertyme’Jones of the Stairs it featured an early appearance from a couple of pre-Zuton Zutons alongside Howie Payne from The Stands. It was originally released on Viper Records ‘cosmic Scouse’ compilation ’21st Century Liverpool Underground’ in 2005 before getting a Heavenly Records re-issue in 2011.

This was Collins’ first brand new album after starting on the road to recovery following his devasting stroke. It was a testament not only to his songwriting prowess but also to his willpower, the love of his family and the high regard his peers hold him in.  The album featured appearances from Romeo Stodart of the Magic Numbers,  Paul Cook from the Sex Pistols, The Ruts Dave Ruffy, Aztec Camera’s Roddy Frame, Johnny Marr, The Cribs’ Ryan Jarman and Jacob Graham, Alex Kapranos and Nick McCarthy, of Franz Ferdinand and Connor Hanwick and Jonathan Pierce of The Drums. It was an album that mixed a Northern Soul sensibility with a laidback indie pop groove allied to Edwyn’s searingly honest autobiographical lyrics.

Well we have to hand it to Gwenno, she’s released a wonderful debut album Y Dydd Olaf’ (The Last Day) which mixes ethereal electronic pop, with a strong political message all sung in her mother tongue (Welsh, well except for the one sung in Cornish that is).  It’s a million pop light years away from her former life as one-third of uber girl group the Pipettes and some of her early solo tunes.  But, of course, this sort of songwriting talent doesn’t just happen overnight, it must have always been there, but many of us were probably too dazzled by polka dots and girl group chants to see it!

It’d be very lazy to describe Gwenno as morphing from polka dot pop princess into a Welsh EMA, but perhaps we could draw some parallels if only we could speak Welsh. What we do know is her album takes its name from Owain Owain’s 1976 novel Sci-fi novel of the same name, which is set in a dystopian future in which robots subjugate the human race via medication.  The album address big theme’s such as patriarchal society, government-funded media propaganda, cultural control, technology, isolation and the importance of, and the threat to minority languages. After a limited release on Peski Records last year, its about to be re-released on Heavenly Records, and it’s quite stunning whatever language you speak

We’re a big fan of the unhinged doom surf of The Wytches who meld the twisted damaged genius of The Cramps with the visceral furious raging power of bands like The Pixies with a bit of Dick Dale surf bubbling under the surface. It’s a potent mix and possibly one best experienced live because their debut album, the marvellously titled ‘Annabel Dream Reader,’ didn’t quite manage to capture their raw power.

The Liverpool trio’s second studio album ‘Not Real’ sealed the deal for us. Their debut album Into The Diamond Sun, whilst highlighting the band’s creativity often suffered from an almost willful sense of innovation. On their second album Rebecca Hawley, Emily Lansley and Lucy Mercer seem far more focused and have dispensed with unnecessary distractions to engineer a collection of songs that whilst still hugely creative, sit together beautifully as a cohesive whole.

Alongside Wolf Alice, Kid Wave are one of the most thrilling guitar bands to emerge in recent years . We absolutely, unequivocally love their debut album ‘Wonderlust.’ There’s nothing that remotely resembles a filler on the album –  it’s an album that will surely resonate with anybody who has been young and dared to dream.  You can read our full review of the album and an interview with singer-songwriter and guitarist Lea Emmery HERE 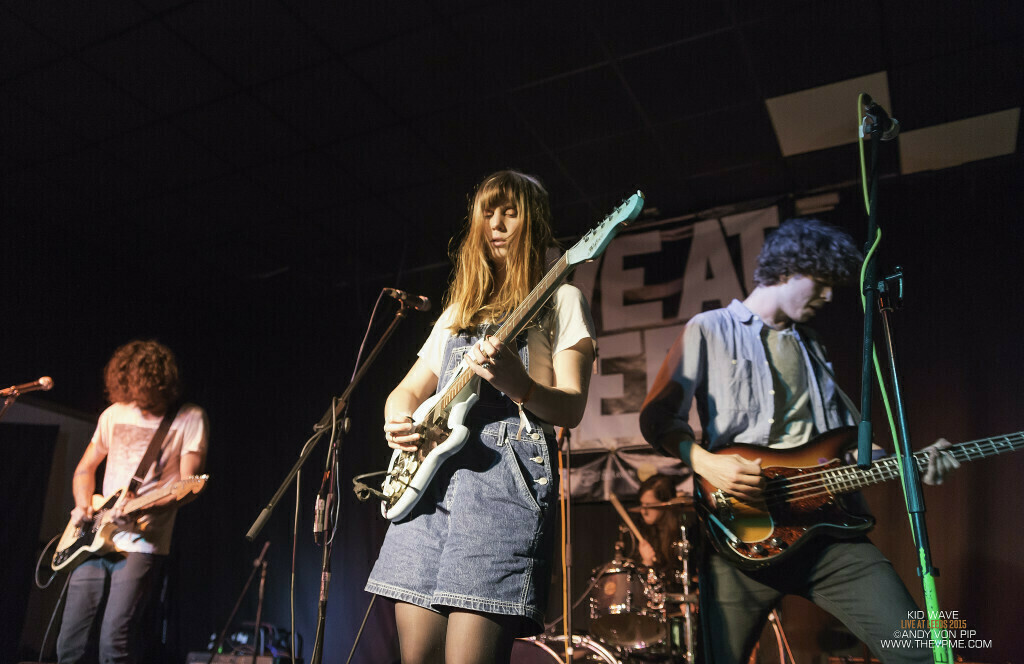