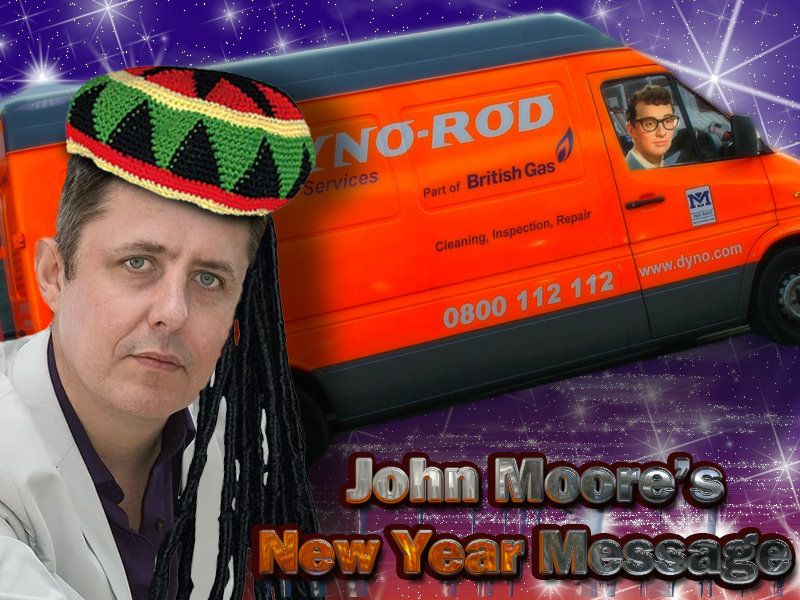 On Christmas Day, without fail the Queen bestows her wisdom on her loyal subjects and reflects back on what an idiot her husband has been.  At the VPME we have gone one better and this New Years message is brought to you by the epitome of sophisticated rock n roll nobility in the shape of the recently knighted Sir John Moore ( Black Box Recorder, The Expressway, The Jesus And Mary Chain, The John Moore Rock N Roll Trio, The Idler, The Guardian )

The highlight of 2011 for me was the glorious summer Sunday afternoon that the man from Dynorod came to unblock the drains. That isn’t to say that the year didn’t turn up any other special moments and events – I recorded a new LP during the first half of the year, assisted by a host of great musicians, most notable amongst them Mr Boz Boorer. This astonishing work of rock and roll wonder has, as I write, not been released, as there does not seem to be any music industry left. The idea of releasing it myself proved so dreadful that I went into a decline and lay down in protest on the couch for six months. Now that my strength and mental faculties are returning somewhat, I suppose that I will make the effort to foist it onto a disinterested public in 2012. Perhaps it’ll become the official London 2012 Olympics theme tunes…it might.

Anyway, back to the sewage situation. If you have ever smelt a blocked and overflowing drain, you will know what I am talking about. It is revolting, nauseating, and eye wateringly disgusting.  Readers – this is the situation I found myself in – the wretched drain right by my French doors, gurgling and spewing up foul viscous sludge – as if the very bowels of hell had deposited their doings on my doorstep.

Now anyone that knows me, knows that I am the type of chap who likes nothing better on a summer’s day, than to sit outside, knocking back cheap red wine, and dreaming of ladies and the collapse of civilization. To have to share my reveries with the excrement of my neighbours…and dare I say, my own, put me in a dreadful mood. My doors were bolted, the room air sealed, yet still the fug permeated.

Having exhausted all cheap methods such as shoving a stick down the drain, and fearing legal action should the sludge seep into neighbouring gardens, my landlord finally took action.

The Dynorod man – I’ll call him Tony – which might even have been his name, turned up on Sunday afternoon.  He was a big fellow- an ex boxer as it turns out. Having attached his hoses, he began a procedure known in the trade as a power flush.

After a few minutes, the smell had gone, to be replaced with the balmy summery fragrances one expects in my neck of the wood. I felt safe at last to open the French doors and venture outside where Tony was hard at work. He refused my offer of wine saying that he had a ‘big job’ on later, but he was extraordinarily keen to show me the blockages and what had caused them. Somehow, his enthusiasm began to rub off on me and it wasn’t long before I was helping.

Having seen my guitars and drums, he reasoned that I must be some sort of a musician – and I confirmed that I was. Now with his build, broken nose, tough demeanour and his earlier conversation about the Kray twins, I had very lazily assumed that he might not be particularly keen on music. To my surprise, he removed his t-shirt to reveal a tattoo of Bob Marley on his chest. Reggae was his passion, and he knew all about it and had followed it throughout his life. We talked about Dennis Bovell, Lynton Kwesi Johnson, his trips to Jamaica, all the old reggae clubs, dub plates, studios…what a brilliant surprise. So yes, I got in the drains with him, lifted stuff out – with tongs, worked the hoses…for anybody that knows me, the thought of me doing any physical labour is astonishing.

I wouldn’t go as far as saying I hoped the drains would never be unblocked, but when it was time for Tony to head up to unblock the drains at the curry house on Wardour Street, I was sorry to see him go. We exchanged gifts – I gave him a John Moore And The Rock And Roll Trio CD, he went to his van and fetched for me The Best of Buddy Holly.

I hadn’t listened to Buddy Holly for ages, and probably never as closely as I should have. For weeks, this CD was on rotation – and it felt as though this lovely man from Dynorod had given me a piece of the puzzle that I was missing. The best music comes from the least expected places. Some might even come from me in 2012 – anyway, Happy New Year.