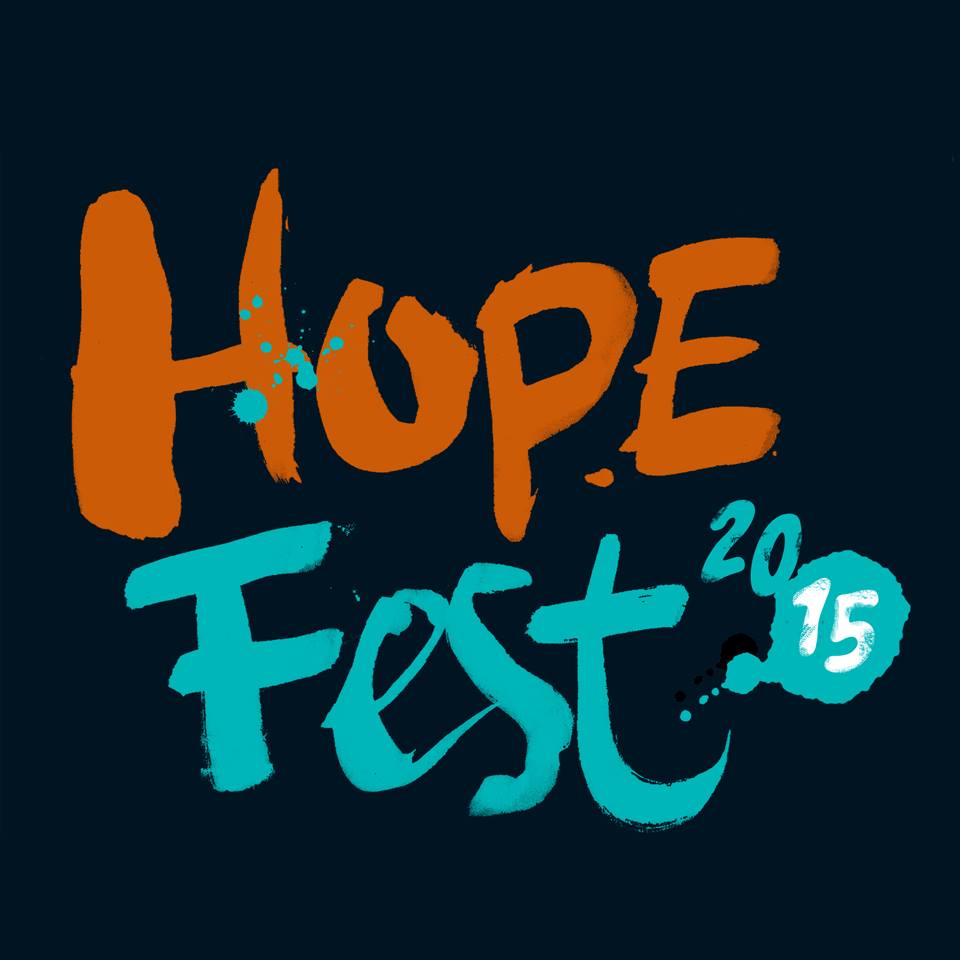 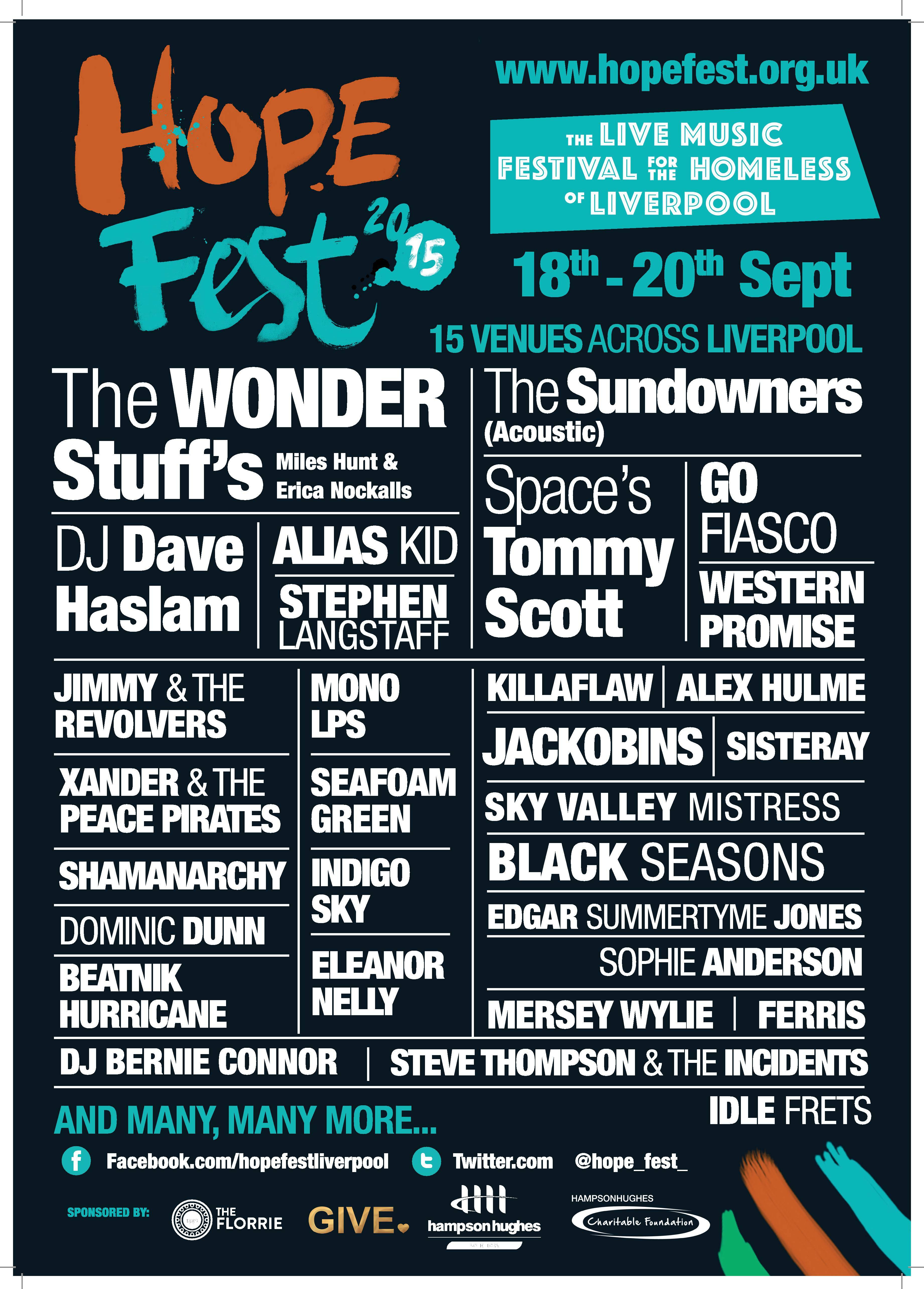 Following an earlier artist announcement that included Alan McGee’s new protégés Alias Kid and Beatnik Hurricane (feat ex-La’s Barry Sutton and Cammy), Hope Fest is excited to share news of more artists joining this year’s event, taking place between 18th and 20th September across 15 venues around the centre of Liverpool.
Cult music heroes, DJ icons and emerging artists are all set to perform at this unique festival offering direct help to people affected by homelessness and highlighting the social injustice of this growing problem. 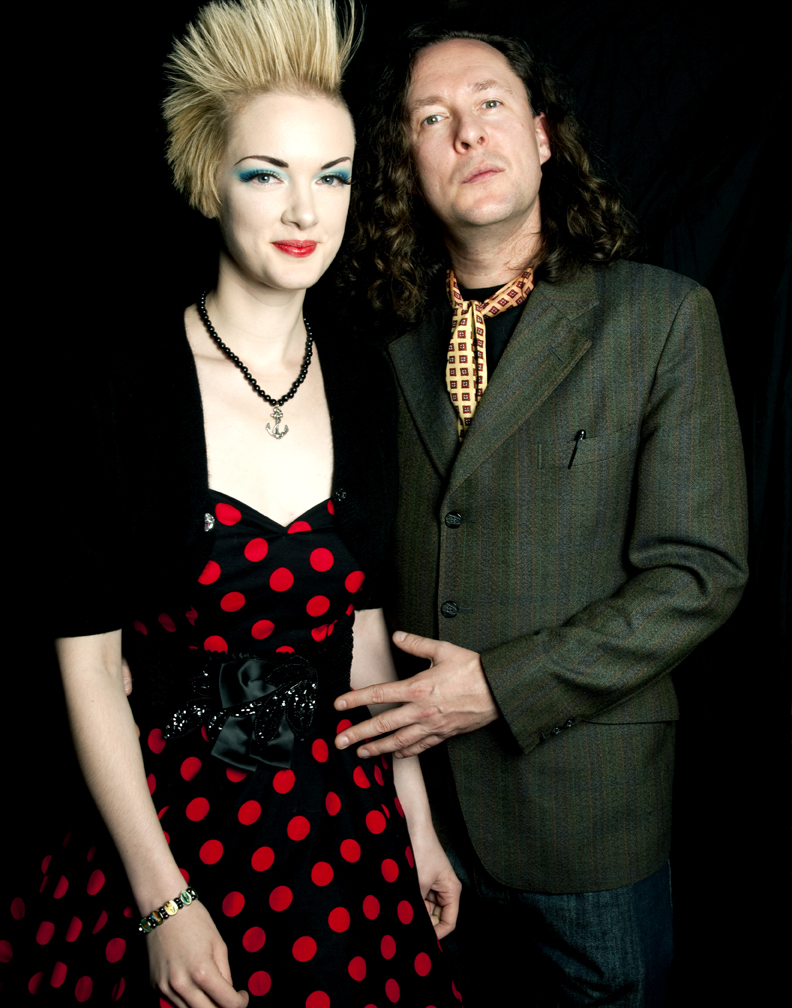 Miles Hunt may not have any obvious claims to Liverpudlian lineage but he certainly have serious star credentials. The founding member of the 80s alternative icons The Wonderstuff, will be performing an acoustic set alongside his partner,The Wonderstuff violinist, Erica Nockalls.
Another addition to the line up is Manchester legend Dave Haslam, the man who has DJ’d for Stone Roses and New Order, and toured with the likes of Paul Oakenfold and Paul Van Dyk. He’s soundtracked parties from Spike Island to Chicago and Berlln. Unlike other DJs, he is equally well-known for his journalism and writing about subjects as varied as the cultural history of Manchester and explorations of the dance music scene through the eyes of DJs. His latest book, Live After Dark, is a chronicle of Britain’s nightclubs and music venues.
Another distinguished custodian of musical knowledge joining the Hope Fest line up is Bernie Scott. Like his Mancunian counterpart Dave Haslam, Bernie is a DJ who’s played all around the world and witnessed the rise and fall of many musical heroes. A Liverpool institution, Bernie is a beacon of musical knowledge shared through his weekly podcast Sound of Music.

Tommy Scott is a name strongly associated with Liverpool’s music heritage. Frontman of Britpop luminaries Space, who are currently touring the UK, Tommy will be doing a solo set at District on Friday 18th September.

From touring with Kasabian and Paul Weller to playing Glastonbury, Liverpool Sound City and All Tomorrow’s Parties, Sundowners are undoubtedly one of the hottest new bands on the current psych scene. Hailing from the neighbouring Wirral and mentored by none other than The Coral’s erstwhile chief James Skelly, the band has been raking in fans and gaining press plaudits at an impressively fast rate. Given their formidable live reputation, they’re bound to become one of the highlights of Hope Fest 2015.

Finally, the festival is proud to announce a very special guest, critically acclaimed poet and lyricist Matt Abbott, who will be hosting the Arts Club stage of this year’s event. Described by The Guardian as ‘a British Eminem, only without the psychopathic, homicidal tendencies’, Matt Abbott has toured extensively in Europe and the UK, performing at Glastonbury and Edinburgh festivals, and gaining praise from R1, 6Music and even ‘Loose Women’.

Hope Fest 2015 launch party will be taking place on 10th September at Circo Details of the event will be revealed in the coming weeks. Over the coming weeks the Hope Fest team will be fine-tuning their artistic offerings and keeping you updated of the latest additions with comedy, workshops and more music yet to be announced.

About Hope Fest:
Hope Fest came into being in the autumn of 2014. Organised by the founder Anna Grace Henney, the original Hope Fest took place across 5 venues, with 80 bands helping the cause.

Unlike other charity events, Hope Fest supporters are not expected to buy a ticket or make a financial contribution. Instead, festival goers are asked to donate a ‘Hope Pack’ made up of essentials, such as food and clothing, passed on directly to Liverpool’s homeless via Hope Fest’s partners The Big Issue North, The Whitechapel Centre and The Basement Advisory Centre. Donating a ‘Hope Pack’ gives fans access to all 15 venues over the weekend.

Another unique feature of the festival are its training programmes and work experience for people affected by homelessness. With support from Crisis NW, these roles cover a range of activities from production to administration.
This year Hope Fest will also be reserving performance slots for the homeless, including Crisis’ resident band as well as Choir With No Name and many more artists who directly experienced homelessness.

Fact and figures:
Over the recent years levels of rough sleeping have risen sharply, with the national ‘snapshot’ count showing a 38% increase between autumn 2010 to autumn 2013 (DfCLG, 2014). ‘Hidden homelessness’ in the form of overcrowded, concealed and shared households has also increased recently. Whitechapel, the leading homelessness charity for Liverpool City Region, provides assistance to a spectrum of homeless clients including homeless families, single homeless, rough sleepers or the vulnerably housed. Whitechapel notes that a record number of 2,286 Merseysiders used its services in 2012/13 –– a 27% increase from the previous year (Whitechapel Centre, 2013). 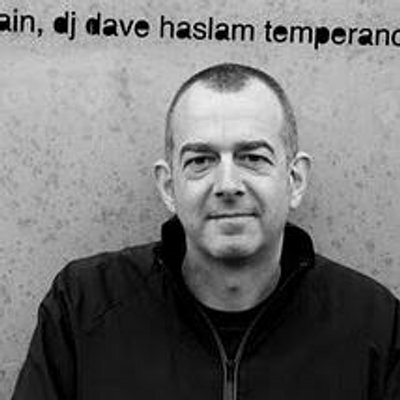 Dave Haslam, DJ and Author: “The homelessness crisis in Manchester, Liverpool, and other major cities is critical. On an individual level it’s sometimes hard to channel your desire to alleviate the situation. You can lobby, you can get angry, you can reach out the hand of friendship to homeless people on the street, but many people subject to homelessness aren’t conspicuous and anger sometimes needs to go hand-in-hand with action. Getting involved with Hope Fest involves me in helping the homeless on a practical level – via the donations to gain entry to the events – but also via the training programmes. I was glad to be asked and it took me less than two seconds to decide to say Yes. I love Liverpool, the nightlife is great in the city; I have to admit, that swayed the decision too.”

Tommy Scott, Space: “I am playing Hope Fest as I think it is appalling that people who have fallen on hard times are made to sleep on the streets. Actually, they aren’t even allowed to sleep on the streets in some cities. It’s a vicious circle for these poor people and they need to be housed in temporary accommodation in the short term and then filtered back into society and given permanent housing.”

Matt Abbott, poet and lyricist: “Hope Fest is a fantastic initiative and I’m proud to on board. Their model strives towards genuine pathways for people affected by homelessness as opposed to just raising awareness. I work with several homeless organisations – I’ve never experienced homelessness but I witness it every day – and to be able to help Hope Fest means an awful lot to me.”
Anna Grace Henney, Founder and Director, Hope Fest: “This year we are taking over Liverpool with 15 major music venues getting involved in this musical extravaganza, all in aid of the homeless. We’re excited to be working with Crisis, The Big Issue and the Whitechapel Centre to offer work experience positions to their service users. Our sponsors Hampson Hughes solicitors, Give2040 and The Florrie have been brilliant in helping us achieve what we have so far this year.”