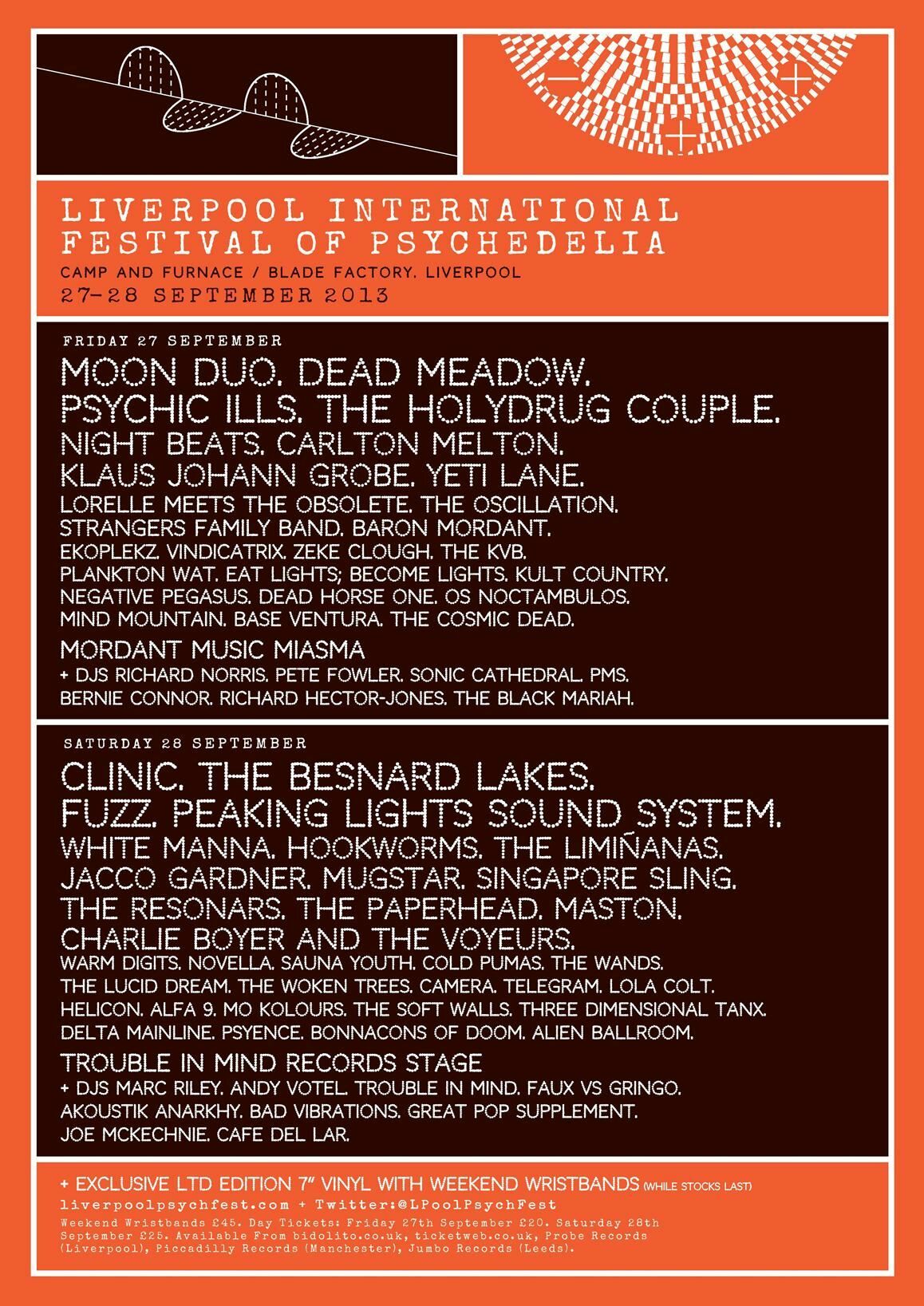 With the announcement of final line-up additions and the release of single day tickets on Tuesday 30th July, LIVERPOOL INTERNATIONAL FESTIVAL OF PSYCHEDELIA announce a limited edition 7” vinyl on their new imprint label PZYK.

The record will feature previously unheard tracks from Lorelle Meets The Obsolete (Sonic Cathedral/Captcha Records) and Maston (Trouble In Mind), as well as tracks from festival headliners Moon Duo (Souterrain Transmissions/Sacred Bones) and Clinic (Domino). PZYK 0001 will be limited to a specific number of copies, and will be given away FREE, exclusively to people who purchase weekend tickets from Bido Lito! (see link below). The records will be allocated on a first come first served basis: once they are gone successful purchasers will be contacted with details of how they can collect their record at the event.

In addition, Liverpool Psych Fest are delighted to unveil the complete bill of artists for this year’s event, with Heavenly Recordings’ scuzzed-up East End rockers CHARLIE BOYER AND THE VOYEURS, and cinematic diviners of psych LOLA COLT added to the programme. Orlando’s STRANGERS FAMILY BAND will be continuing their proggy tour through the outer reaches of blistering rock by teaming up with Dead Meadow again at Liverpool Psych Fest. Glaswegian psychonauts THE COSMIC DEAD are joined by CAMERA, Berlin’s latest wunderkinds of drone, with the deliciously raw garage rock of TELEGRAM and Manchester’s sonic wanderers BASE VENTURA completing the stunning roster.

The live action on Saturday 28th September begins at 2pm, with CLINIC, FUZZ, THE BESNARD LAKES, HOOKWORMS, WHITE MANNA and a PEAKING LIGHTS SOUNDSYSTEM keeping things running until 4am. Individual day tickets are available to purchase now, and full breakdowns of the running orders for each day can be found on the accompanying poster, or at www.liverpoolpsychfest.com.

BBC 6 Music’s MARC RILEY will be performing an exclusive DJ set at the festival this year, following on from recent live sessions with Psych Fest artists Hookworms, Telegram and Moon Duo. The award winning DJ has a sharp ear for today’s cutting edge sounds, so expect his set to be nothing short of an education. Founder of the consistently stunning Finders Keepers Records, ANDY VOTEL, will also be bringing his eclectic record bag to the event, traversing the entire musical spectrum, from his Twisted Nerve work to his own electronic productions.

RICHARD HECTOR-JONES (Never Been Caught, Slut Smalls Records) and BERNIE CONNOR (Bernie Connor’s The Sound Of Music) will be  performing an exclusive back-to-back DJ set, while proprietor of the longest running alternative music show on radio, Roger Hill, brings his PURE MUSICAL SENSATIONS playlist to the turntables. SONIC CATHEDRAL will be reprising their role on the 1s and 2s this year, along with TROUBLE IN MIND RECORDS’ DJ PSYCHED ALEX, and Shindig! Magazine’s SI NORFOLK. All of these will be joining existing disc spinners RICHARD NORRIS (The Time And Space Machine, Beyond The Wizard’s Sleeve) and Super Furry Animals collaborator PETE FOWLER.

This is all in addition to a bill already consisting of –

The festival features a stage curated by the stunningly consistent TROUBLE IN MIND RECORDS, who will be making the trip across the Atlantic from Chicago bringing a cohort of their artists along for the ride. Liverpool Psych Fest will also host an exclusive hook-up with the gloriously antagonistic MORDANT MUSIC who bring an audiovisual MORDANT MUSIC MiasMa to the festival.

The full programme of visual arts, projections, film and additional kaleidoscopic delights will be announced later this summer, ahead of the festival in September.