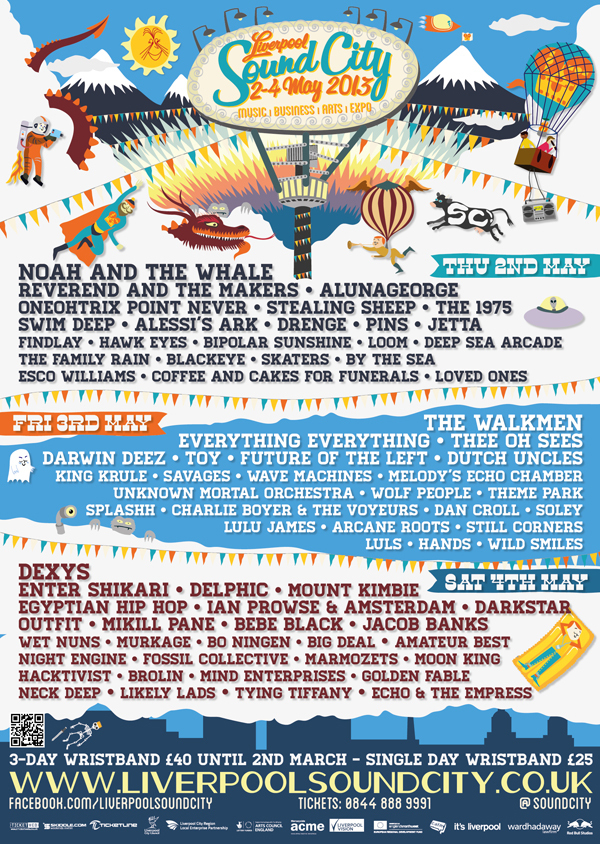 Noah and the Whale are used to playing huge venues but they will play a spectacular show in Liverpool at the Anglican Cathedral, the perfect setting for a much fuller sound that belies their more folksy beginnings.  The band release their fourth album ‘Heart Of Nowhere’ in May and will showcase tracks from it at this very special show.

Band of the moment, Everything Everything recently released their second album ‘Arc’ to widespread critical acclaim and their art-funk stylings are not to be missed. Melody’s Echo Chamber’s kaleidoscopic fusion of psych rock and warm hypnotic pop is a thing of great beauty whilst the futuristic indie pop of New Yorker Darwin Deez and crystalline leftfield pop of Manchester based Dutch Uncles will also be two hot Sound City shows. Delphic’s debut album heralded a reappraisal of dance influenced rock music and paved the way for the current crossover success of the genre and their second album ‘Collections’ sees them heading into even more adventurous territory. The experimental drone of Oneohtrix Point Never and noisily drenched voodoo pop of local band Stealing Sheep will take music matters in a much more avant garde direction.
Punky blues rock from the Peak District comes courtesy of Drenge, a band being tipped by everyone to watch out for in 2103 whilst blog queens Pins showcase why the North West continues to produce the UK’s most exciting music.  Savages are another girl band whose post-punk is rapturous, passionate and intriguing.  Wave Machines second album ‘Pollen’ was a masterpiece that met with huge critical acclaim and their homecoming show at Sound Citywill show why they are one of the best bands the city has produced.