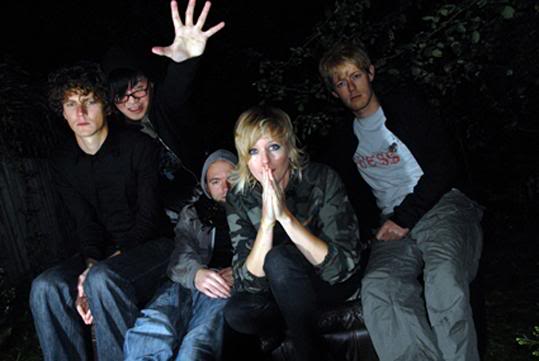 Song Of The Week

Keane have set-off on the South American leg of their world tour but have still had time to commission a remix by Innerpartysystem of their album’s title track ‘Perfect Symmetry’. You can listen to it  below or “right click save as” to download it here

‘Chancer’ is the third single from Gloria Cycles, a four piece from Brighton who look set to make their mark in 2009’s most. If you like your indie accompanied by intricate guitars and heavy bass, then this could be the band for you.

They spent most of last year on the road playing up and down the country wowing audiences with their snappy basslines, catchy melodies and never-ending hooks. They were asked to go on tour with Cage The Elephant and Fight Like Apes, as well as playing to 25,000 eager German music fans at Taubertal Festival. They also played unmissable sets at Great Escape, Liverpool Soundcity and Offset.

‘Vegas’ and ‘No Zero’s’ (released on limited coloured vinyl) grabbed the attention of those odd folk at Radio 1 and their debut single whizzed straight into the top 30 of their indie chart on word of mouth alone. The band have a true DIY ethic, they make their own dazzling artwork, promote their very own club night in Brighton and also direct their own videos.

Their debut album mixed by John Cornfield (Oasis, Stone Roses and Supergrass) is due for release later this year. Keep your ears out for a full UK tour around the release of the single.

The Indelicates are playing the opening night of Club Cog at The Lexington on Saturday the 7th March. Ticket links are here: and here:

They have also written a Recession Song, featuring Mikey Art Brut, Keith Totp, and Nicky Biscuit, as well as the usual Indelicate lot. The song is accompanied by a video specifically designed to make you buy the T-SHIRTS. I think you’ll agree, it does a very effective job of explaining quite how super cool you’ll be if you wear one, especially if you team it up with a brown cardigan handed down to you from your sisters first trip to a charity shop in the 80’s. It’s recession chic, it’s hot, it’s glamourous, it’s dirty, it’s…Indelicates Recession wear!!!

And buy the T-SHIRTS here:

Simon Indelicate has been writing and recording a concept album about Waco called “David Koresh Superstar”. It’s really quite something, you can listen to some of the songs here:

And you can buy Merchandise for David Koresh Superstar, as well as T-shirts based on the signs used in “Julia, We Don’t Live In The 60’s” here:

Talented singer songwriter Lizzyspit has a free download of her latest double A-side single available “Little Dan/Stars In The Water” “here. And you can read an interview with her here

Blur’s Damon Albarn and Graham Coxon played a surprise reunion gig at this year’s NME Awards. It was their first performance together since 2000,  thankfully they only played one track. Those yearning to hear more will have to wait for the band’s full reunion concert at London’s Hyde Park in July. Personally I really CAN wait. Blur’s other members, the posh farmer fella who smells of cheese and the one who sounds like a pack of fruit gums were also at the ceremony, although they didn’t do anything to merit anything more than this ill formed sentence.

Brit-pop’s resurrection continued with Oasis winning the best British band gong. The decision was not without some controversy, amusingly large parts of the crowd started to boo when the winner was announced. Hapless host Mark Watson appeared confused, saying: “I don’t know why you’re booing, you lot voted for them, c’mon people, if  not for the Gallagher’s sake then please show some respect for the venerable Alan McGee”. Unfortunately for Watson this was like fuel to the fire , and he was soon engulfed in a tidal wave of rage, he was last seen being carried in the direction of a huge rudimentary Wicker Man that had been hastily erected on Hampstead Heath. The Gallagher’s were not in attendance, due to technical problems with their “mono-brow”.

James Allan from Glasvegas, was apparently still sulking yesterday after hearing a word his ears have not been accustomed to of late.Namely a “no” from The NME, when he asked that a huge ice sculpture be provided at the awards show.

Sadly the ceremony was also horribly marred by a series of cheesy pop duets that seem to be in-vogue at present, but which invariably have the audience mumbling “god, make it stop”. Franz Ferdinand teamed up with La Roux to cover Blondie’s Call Me, and Florence and the Machine joined Glasvegas to tackle the Elvis Presley hit Suspicious Minds. Not wanting to be outdone, Friendly Fires brought out a troupe of Brazilian dancing girls and glitter cannon. Nice to see bands still being as subversive as ever isn’t it ? The spirit of Phil Collins is alive and well and in safe hands.

We like this lot, they are a bit on the cuckoo side of the clock. Yes, Exeter 5 piece Ono Palindromes unleash their latest offering of perfectly crafted art pop, the Kitty Magic EP looks  set to enhance their rapidly increasingly critical and commercial reputation.

“Eat Your Make Up” is a song influenced by an early John Waters movie where young girls are taken in from the streets, and forced to live on a diet of make-up from their matron/pimp. Including a verse which centres on the concept of Alice in Wonderland being a crazed alcoholic it clearly indicates their effortless ability to combine well known popular culture with an artistic twist – surely the very definition of art-pop or what we called in my day “mad as a clown with TWO balloons “

From its staccato opening, of linear cello and guitar, to its achingly beautiful coda, Shadow Committee is the epitome of Grammatics’ heroic art rock.  It’s a-side companion Time Capsules And The Greater Truth a second movement of glacial acoustic wordsmithery, or something,  released 16h March.

Grammatics are about to head out on tour with Red Light Company, here are full dates:

What the critics are saying:

“Grammatics bowl you over with washes of high-IQ indie. Great stuff.” – THE SUNDAY TIMES

“The summit of a glittering sonic scape.” – ARTROCKER