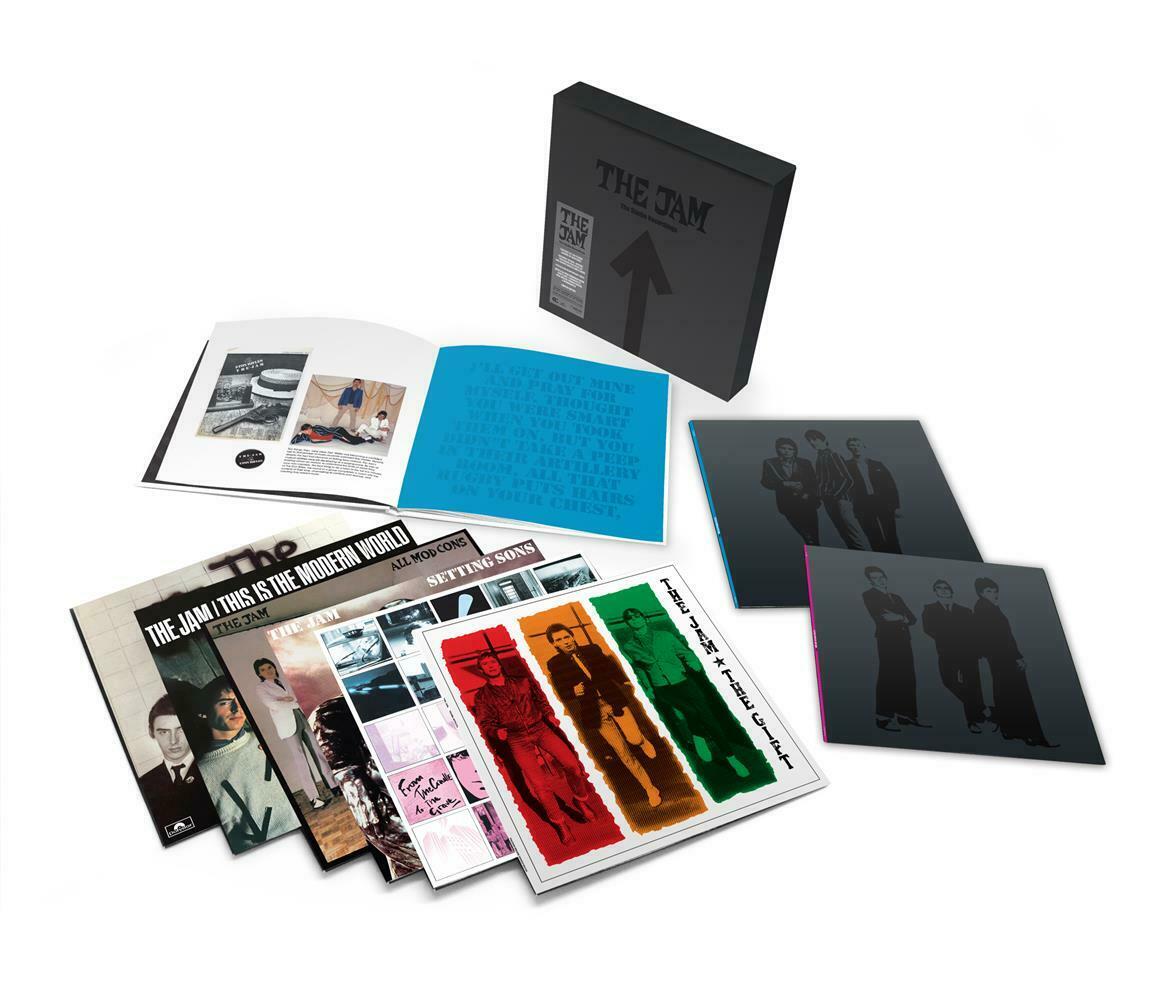 One of the most popular bands to emerge from the UK punk rock scene of 1977; The Jam had a phenomenal impact on pop music and wider youth culture. In their short career, along with the likes of the Sex Pistols and The Clash, they influenced a generation with their music, style, politics and inspiration.

Taking creative direction from a wide sphere of influences – The Who, Dr Feelgood, The Kinks and Motown amongst others, they achieved 18 consecutive Top 40 singles in the UK (including 4 number 1s) – they had a fanatical following, their singles entering straight in the top 10, or number 1 in some cases. Their gigs sold out within minutes. Still beloved of original fans and new supporters through Paul Weller’s solo career – he still plays many of the Jam songs in his live sets today.

The full package is listed below

• Incendiary debut LP from May 1977. With influences from the likes of The Who & Dr Feelgood.
• Includes hit single – In The City  (which gave the band their Top Of The Pops debut) and Weller’s most ambitious early song – Away From The Numbers

2. This Is The Modern World

• Landmark album from 1978 that marked a turning point in The Jam’s career, Weller’s more melodic, complex, and lyrically incisive song-writing  influenced by The Kinks.
• Includes the classic hit singles Down In The Tube Station At Midnight, and double A-side David Watts / ‘A’ Bomb in Wardour Street.

• Released at the end of 1979, number four in the U.K. and their first charting album in the U.S.
• Loosely conceived as a ‘concept’ album, with a distinct link between key songs – Thick As Thieves, Little Boy Soldiers, Wasteland and Burning Sky.
• Includes hit single Eton Rifles and the Bruce Foxton penned Smithers-Jones.

• The ambitious, experimental Sound Affects followed in 1980, moving away from the classic Jam sound it made number two in the U.K. At the time Weller considered the album a cross between Off the Wall and Revolver and cites it as his favourite Jam album.
• Includes no. 1 single Start! and one of the band’s most cherished songs – That’s Entertainment – number 21 in the U.K. as an import single, confirming the band’s enormous popularity.

• The band’s final studio album from 1982 and first number 1 album – a departure from the harder Jam sound, including more soul and funk influences that would preface Weller’s next project – The Style Council.
• Includes the double A-side number 1 single Town Called Malice / Precious. – the band became the first group since the Beatles to play two songs on BBC’s Top of the Pops.

The Jam existed in the long age of the 45, that perfect pop form via which the best artists not only created era-defining ‘A’ sides, but usually ensured that their supporting features were worthy of repeated plays. Any student of British pop’s first golden period will be familiar with the best examples: The Stones’ The Last Time came with Play With Fire, The Beatles’ Hello Goodbye with I Am The Walrus, The Small Faces’ All Or Nothing with Understanding.

The Jam were masters of this, as proved by the music collected on this set’s last two LPs – a kind of shadow history of the group, full of moments of revelation. To instantly understand their talent, listen to such songs as Smithers-Jones, Tales From The Riverbank, or Pity Poor Alfie: treasured items in their catalogue, and all ‘B’ sides, which gave the records on which they came a richness and fascination greater than some people’s albums.