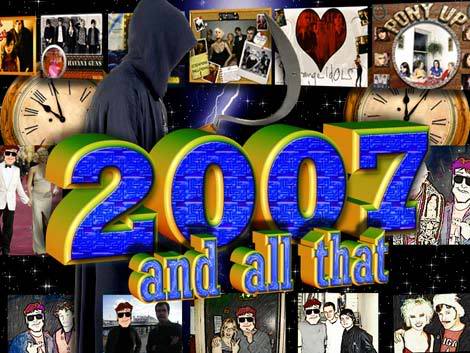 “Blitzed” By the Raveonettes

Albums Of The Year:
1. Lust, Lust, Lust -The Raveonettes
2. An End Has A Start-Editors
3. Make Love To The Judges With Your Eyes- Pony Up
4. The Great Unwanted -Lucky Soul
5 In Our Bedroom After The War-Stars
6 Citrus-Asobi Seksu
7 Sound Of Silver- LCD Soundsystem
8 Favourite Worst Nightmare – Arctic Monkeys
9 We Live And Die In These Towns – The Enemy
10 Lady’s Bridge- Richard Hawley
11 Made Of Bricks -Kate Nash
12. 23- Blonde Redhead
14. Into The Blue – Charlotte Hatherley
15. Overpowered – Roisin Murphy

“The Night Starts Here” By Stars

Gigs Of The Year:
1. Editors ( Liverpool )
2, The Pipettes (Manchester)
3. The Wedding Present (Liverpool)

Remix Of The Year :
Let’s Dance To Joy Division – The Wombats -KGB Remix

TV Of The Year :
Heroes
Extras (Xmas special)
Dr Who

Discoveries Of The Year:
Screaming Ballerinas
Fight Like Apes
Slow Down Tallahassee
Paloma Faith
Lilly Rae
The Pan I Am (well sort of new!)

Comeback Of The Year:
The Jesus & Mary Chain
The Wedding Present

Films Of The Year :
The Future Is Unwritten
The Last King Of Scotland
Control
The Departed (ok so it’s basically a remake-but in a terrible year for movies all the above stood head and shoulders above the dirge)

Disappointments Of The Year ;
“Lucio Starts A Fire” – Joe Lean And The Jing Jang Jong (oh dear, I think there must be much better in their arsenal)
Avril, regressing musically to the level of a 6 year old and sharing the world view of a 12 year old-hardly a progression, artistically eh! Next year will see Avril riding a trike, and making romper suits the must have leisure wear item.
The finale of Dr Who (If that made sense to ya then lay off the LSD )
“Panic Prevention“-Jamie T ( After the majesty of “Sheila” I was expecting so much more)
Monkey Swallows The Universe- Split (?)
Regina Spektor Live (Liverpool) (Flat, and slightly dull -the “kooky” behaviour between songs just grated after a while)
“Neon Bible” – Arcade Fire
“The Good, the Bad & the Queen” – The Good, the Bad & the Queen
The Hot Puppies gigs cancellation (sniffle)

Quotes Of The Year ;
“Kaiser Chiefs just scare me. Every single one of them looks like a weird scary ventriloquist dummy. Specially the little man with the hat.”- Linda Hollywood (Havana Guns)

“What gets me is that we really don’t have stars anymore. Bowie looked like he was from another planet, and behaved like a star – you’ve got to be a bit arrogant and tread that fine line, but few people really do anymore. The Internet has made bands / people too accessible – and that weird desire that everyone has to be ‘really normal, actually’ is bollocks. What’s interesting about being normal?”
Ollie Pound (Screaming Ballerinas)

“We’ve never seen anybody who looks like Andy, dance the way Andy does” – Monster Bobby

“I’ve never heard that Alanis-thing before. I am not naked with a blurred crotch in my videos! I’ve never been to India! I fully understand the actual meaning of the word “ironic”! I’ve never even done a cameo on “Curb Your Enthusiasm” –Marit Bergman

“I have never seen anything referring to me as the male Yoko Ono before” –Simon Indelicate (the Indelicates)-Interview coming soon!

“After reading Cheryl Coles’s comments branding me a “chick with a dick” I was feeling pretty low. I know I’ve said bad things about people in the past but this is mean… I may not be as pretty as you but at least I write and SING my own songs without the aid of autotune. I must say taking your clothes off, doing sexy dancing and marrying a rich footballer must be very gratifying, your mother must be so proud, stupid bitch.” –Lilly Allen on the ever intelligent Girls Aloud WAG, Cheryl Cole

“F**k Girls Aloud. I’d rather be a fat chick with a dick, than an F**king asshole. It’s hard to feel good when magazines say you’re ugly, so I know how Lily feels.”-Beth Ditto

“One minute I’m waiting for Kate to arrive to join me in the Jacuzzi for a romantic evening. The next thing I can remember is doing cold turkey in a vomit-filled cell.” Pete Doherty

“It’s like people going up to Paul McCartney and saying: ‘So, Paul, who’s this fool, and where’s this hill? This is what we’re up against. This is what Kurt Cobain had to put up with. And what did he do? He blew his head off.” – Kaiser Chiefs Nick Hodgson on people asking who Ruby is –(Comparing themselves to the Beatles and Nirvana? -hahahaha ! So please people keep asking who Ruby is , there’s still hope!)

“Johnny Borrell is an idiot, he just makes trouble for himself. Having his own tour bus or chauffeured car that drives behind? And at Reading apparently he had his own dressing room, his own tent that was his. I mean what’s that about?” –Tom Clarke -The Enemy

“Conor doesn’t understand how the relentless stream of “cheers mate, got pissed last night, ha ha” interviews that clutter every single issue of the ‘new’ NME are simply not interesting to those of us who have no trouble standing upright.” Morrissey on NME’s Connor McNicholas

“I model lack lustre panicky in vain search for the remedy
No words only melody come so I take the day off
My love, my love, she sits with me, I love, I love her company”

“Always here, always on time
Close call, was it love or was it just easy
Money talks when people need shoes and socks,
Steady boys, I’m thinking she needs me”
and of course
“Acid rain, when Abel looked up at Cain
We began the weeping and wailing
A hurried high from pestilence pills and pride,
It’s a shame, we could have gone sailing “

“Have you ever popped champagne on a plane
While gettin some brain
Whipped it out, she said “I never seen snakes on a plane”

Genius or a slightly childish. Misogynistic or new man?

“Y’all pop the trunk, I pop the hood, Ferrari
And she got the goods
And she got that ass, I got to look, sorry
Yo it’s got to be cause I’m seasoned
Haters give me them salty looks, ….”

Videos Of The Year