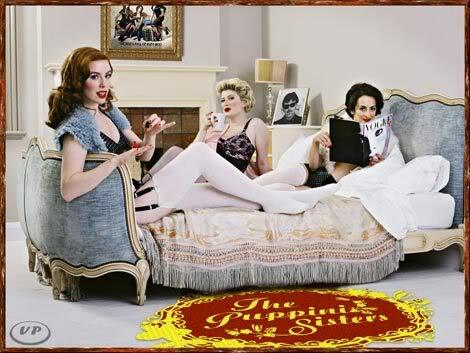 To start an irregular series of occasional album reviews we kick off with the Puppini Sisters second album “The Rise and Fall of Ruby Woo”. We decided to rope in a guest reviewer, on this occasion we were lucky enough to get forces sweetheart 1992-1995, Ms Anna Peska to do the honours …..

Following on from their ultra successful debut album ‘Betcha Bottom Dollar’, like all charming musical surprises, Marcella, Kate and Stephanie otherwise known as the fabulous The Puppini Sisters deliver a stunning second album amusingly entitled ‘The Rise and Fall of Ruby Woo’ (Ruby Woo being a vivid shade of red lipstick which the lovely ladies have a penchant for: – come on MAC cosmetics, sponsor them immediately!).

The Tracks –‘Spooky’ a Dusty Springfield/Andy Williams cover opens the album at a full on up-tempo jazzy pace quickly followed the virally infectious Bangles, ‘Walk Like an Egyptian’, like you’ve never heard it before. Some beautiful whistling going on there too!

Everyone admittedly (or perhaps not) owns a ‘chill out’ compilation which is guaranteed to have Groove Armada’s ‘At The River’ cunningly disguised as ‘Old Cape Cod’ contained within. The Sisters, with their trademark harmonies manage to relax and lull you into a state of tranquility only to swiftly and painlessly bring you back to life with the wonderfully buoyant ‘Soho Nights’ an original penned by the girls. It tells the tale of many a night spent in London’s more nocturnal and seedy but ‘fun’ districts and features the apt lyric “drinks were dirty like the streets”. Westminster council should take note of this well made observation if I may say so myself!

‘I Can’t Believe (I’m Not a Millionaire’) another original, is a bluesy number with a fantastic guitar solo courtesy of Martin Kolarides. ‘It Don’t Mean a Thing (If It Ain’t Got That Swing’) is a happy, clappy, foot stomping piece of music (with a few Puppini-esque surprises cleverly segwayed into it) which will lighten the dankest autumnal day. Take That asked us, “Could It Be Magic”, my answer to their question is yes, yes it is magic, The Puppini Sisters conjure up (do you see what I did there)……a brilliant cover, sounding sultry, seductive and sexy(I seem to like using words that start with the letter “s”)yes they achieve all the things that “chubby” Barlow and the boys singularly failed to do!

‘Jilted’ another original, is a song which spookily sounds like the soundtrack to my life. The opening lyric being “I bought another dinner for one” says it all; but that’s enough about me,a song initially about self pity which then turns into a ‘Sisters’ anthem. Next up is ‘Don’t Sit Under the Apple Tree (With Anyone Else But Me)’ a bitter-sweet song (depending on the variety of the said apple tree ) originally recorded by the great Glenn Miller and The Andrews Sisters. This, in my opinion is a 1940’s song about the art of stalking.

Personally ‘Crazy In Love’ is one of the stand out tracks on the album. A huge hit for Beyonce (and her gravity defying posterior,) the Puppini’s give this song a truly amazing makeover featuring a fantastic violin solo by the lovely Stephanie, transforming this R&B classic into a foot stomping one might say almost Romany influenced melodic work of art, which you can shake your ‘booty’ to in the privacy of your own home, if you so wish.

‘It’s Not Over (Death of The Toy Piano) tells us the tragic tale of the ‘suicide’ of Kate’s beloved baby piano. I sadly witnessed it stage dive during a gig in London only to shatter into tiny,little, deceased piano pieces. I strongly believe that writing the lyrics to this song acted as ‘therapy’ for its loving owner. The penultimate track on the album; ‘And She Sang’ demonstrates how effortlessly the Puppini’s voices blend to produce quite a haunting number.

‘We Have All The Time In The World’ originally sung by gravel voiced Louis Armstrong (who it appears was sadly misled with regards to how time and mortality work, god rest his soul-VP) ends the album in a creamy smooth sultry, loved up fashion with Marcella ‘doing her thang’ on the accordion.

To cut a very long story short, this second album is beautifully produced and sung with choruses that stay long in the memory. A great mixture of cover versions and original tracks demonstrates the versatility and creativity of The Puppini Sisters They do jazz, they do swing (???… oh…. yes sorry – I understand now.…VP) they do pop, they do blues; a truly amazing and varied repertoire from three astoundingly talented ladies!

Expect this album to be filling many a Christmas stocking this year instead of the usual nuts and tangerines!