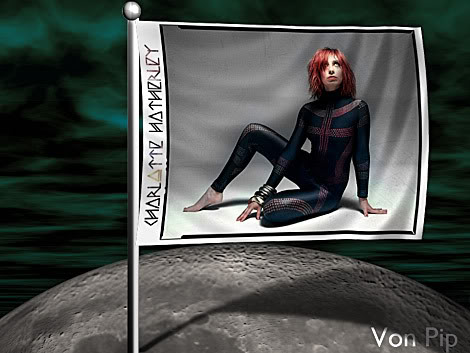 Read my interview with Charlotte, exclusive to Altsounds.com HERE

The thing that’s always impressed me about Charlotte Hatherley is she’s just so bloody good at what she does. She’s a great guitarist, an innovative songwriter, runs her own record label, is beautiful, has been a member of Ash, Client, Bat For Lashes and I’m quite sure she could bring about world peace if she put her mind to it.

In a world where people are being happily manipulated into believing the “X-Factor” really is the definitive bench mark of true musical talent it’s difficult to know if Charlotte’s third album “New Worlds” will shift any more units than her previous releases. Should such a scenario transpire then it really would be criminal as it certainly deserves to be heard by a wider audience and result in her fanbase expanding at the same rate as Jamie Oliver’s waistline. It’s definitely her strongest and most accomplished work to date.

“New Worlds” demonstrates not only Charlottes’ gifts as a great lyricist and guitarist but it also showcases her ability to effortlessly merge and slip into various musical genres and styles whilst still producing an album that works as a cohesive whole. Album opener ‘White,’ is all angular, with jagged guitar riffs that are underpinned by driving rhythms that could quite easily be Elastica if they’d managed to produce better tunes. Latest single ‘Alexander’ starts off innocently enough with a melodic, slightly twee acoustic intro but the song really explodes into life when the chorus kicks in, whilst ‘Straight Lines’ is pure melodious jump up and down new wave/punk. Thematically the album appears to be centred on a quest for veracity, a desire to slowly peel away layers and reveal some kind of inner truth whilst colours are deftly employed as an important descriptive tool, used to highlight moods, emotions and personality traits.

Hatherley isn’t afraid to experiment either, for example the slightly kooky ‘Firebird’ is the sort of quintessential eccentric English pop song that recalls Ray Davies with his modus operandi setting cranked up to “whimsical.” It shouldn’t really work, yet Hatherley pulls it off with great charm and skill. The albums title track ‘New Worlds’ is part XTC, part Chrissie Hynde yet remains unmistakably Charlotte, and it’s when Charlotte “rocks” that her unique guitar playing style can really be appreciated. There’s not a bad track on the album and songs like ‘Full Circle’ and ‘Little Sahara’ merely serve to confirm the view that we should really bestow the title of ‘national treasure’ on Ms Hatherley and give thanks that the music world is still home to innovation and genuine talent. The albums final track ‘Wrong Notes’ make you want to grab Cowell by his aesthetically ignorant lug holes and roar “Damn it man, THIS is real music, not Robson and f***ing Jerome!”

“X-Factor” may be the drug of choice for many people and as Oscar Wilde wisely deduced “Public opinion exists only where there are no ideas” but there are alternatives, there are fresh new ideas. We really should count our blessings that despite not having massive budgets or huge PR campaigns we still have artists like Charlotte Hatherley who are brimming with ideas, talent and passion and who make music that really does matter. This is a ‘New World’ that should not be left undiscovered, go play in the fresh snow kid.  ;)

This review was originally written for Altsounds.com which you can read here

‘Alexander’ starts off with a whimsical, almost folksy acoustic intro, which for some reason conjures up Britt Ekland’s body double prancing about the bedroom in the ‘Wicker Man’ as a bulging eyed Edward Woodward almost gives himself a hernia trying to subdue the beast within (sadly this probably says more about the reviewer than it does about the song). The track sees Charlotte trying to elicit a sense of openness from the chap around whom the song centres, it would seem he is unwilling or unable to provide our Charlotte with the reassurances she is seeking and his reticence to give himself totally to the relationship seems to be something that deeply troubles Ms H. One can’t help but feel that Alexander’s attempts to keep things to himself have somewhat backfired and must rank up there with Rod Hull’s “I’ll just pop up on the roof to adjust the TV aerial” as a “bad idea” in the “Bad Idea Hall of Fame!” You see unfortunately for Alex, Charlotte’s gone and written a song about it now and it’s been on the radio and everything…and it’s not only Ms Hatherley wondering- ‘what kind of dreaming you do behind your innocent eyes’ –it’s the nation!! That’ll teach you eh ?

The song essentially deals with honesty and emotional depth within relationships. We never find out exactly what Alexander is hiding but Charlotte definitely senses there’s another side to his character which he is keeping hidden. Can she trust him? Just what is he holding back? Does he disappear come the full moon and return somewhat disheveled with a craving for raw steak? Or worse, is he a young conservative?! Of course it’s perfectly plausible that Alexander, resplendent might I add, in his suit of royal blue, has nothing sinister to hide at all, he might be an avid trainspotter, attend the odd Star Trek convention (is there any other type?) or simply enjoy the unrivaled adrenaline rush provided by secretly collecting horse brasses. Who knows?

‘Alexander’ is the sort of song that slowly draws you in before it hooks you with a fantastic chorus but the real surprise is just how good the accompanying ‘Black N Red’ remix is. I don’t normally enjoy remixes but this I’m afraid is absurdly good, it might not quite do for Charlotte what Weatherall did for Primal Scream with ‘Loaded’ but it’s one of the best remixes you’re likely to hear this year. If you’re planning to buy the album but have maybe decided to skip the single, rest assured it really is worth a couple of quid for this version alone….. and here’s an idea….. how about a remix album?

This review was originally written for Altsounds.com which you can read here