Collaboration seems to be the name of the game right now for a few in the alt folk arena. This can have two potential outcomes – the blandness of management by committee, or it can be just possible to touch and hone something to exactly the right moment, where it emerges greater than the sum of its parts. I’m happy to report that’s what we have here, in this charming, nay quirky, little record calling itself Cold Seeds. It consists of Frances Donnelly from Animal Magic Tricks, Pete and Neil from Meursault and Kenny Anderson aka King Creosote. Which, when you think about, makes this a bit of a pocket ‘super-group’.

It got recorded in best home spun style at Song by Toad corporate HQ, otherwise known as ‘Matthew’s house’, so much so that you can hear the family cat on the first track – and there was me thinking the meow came out of an effects pedal. It started out a bit unplanned with Frances doing some stuff with the Meursault boys, then Kenny adding to the mix the following weekend. It doesn’t feature all of them on stage together, instead each comes to the fore in different songs, oil and water mixing but staying separate. Despite this, the album pulls together in an emotional sense.

I’m more familiar with Meursault and Creosote, which makes Frances’ vocal lead sitting over plucked strings and cello on ‘King’ a mesmeric discovery.

‘Sleet’ sounds as though they’d taken a wheezy organ into a cow shed. Pastoral is the word I’m grasping for. The track first saw light on the Meursault album and is little changed here.

Then we come to the moment where my mind was blown sideways in the most serene possible way by Frances fronting ‘Crank Resolutions’. Another of the songs that first appeared on the Meursault record, it is massively reinterpreted here. Her voice is addressed over a slightly wheezing quietude, with a bolder dreamlike double tracked descant. Listening on headphones in the quiet of my own Sunday morning house, I have to admit it got me and I proper welled up. I’ve not heard anything quite as affecting in a long time, and without an obvious hook in sight.

The other standout here is the story telling in ‘The Perfume of Mexican Birds’. Fragments and memories and poetry. They say much of memory comes from smell? Here’s your living proof. A fitting end to the collection comes from ‘Please Don’t Send Me Home’, a soaring rambling madness that will be familiar to anyone who has given Meursault more than a passing listen.

This is surely a record with a fairly narrow audience, but within that one that desperately and keenly repays a tiny bit of attention during your Sunday morning. A moment in time that evokes a place of imagination and makes you want to be there, it’s a quiet triumph.

1. Leave Me to Lie Alone in the Ground

7. The Perfume of Mexican Birds 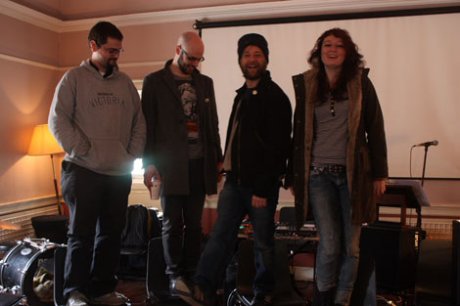