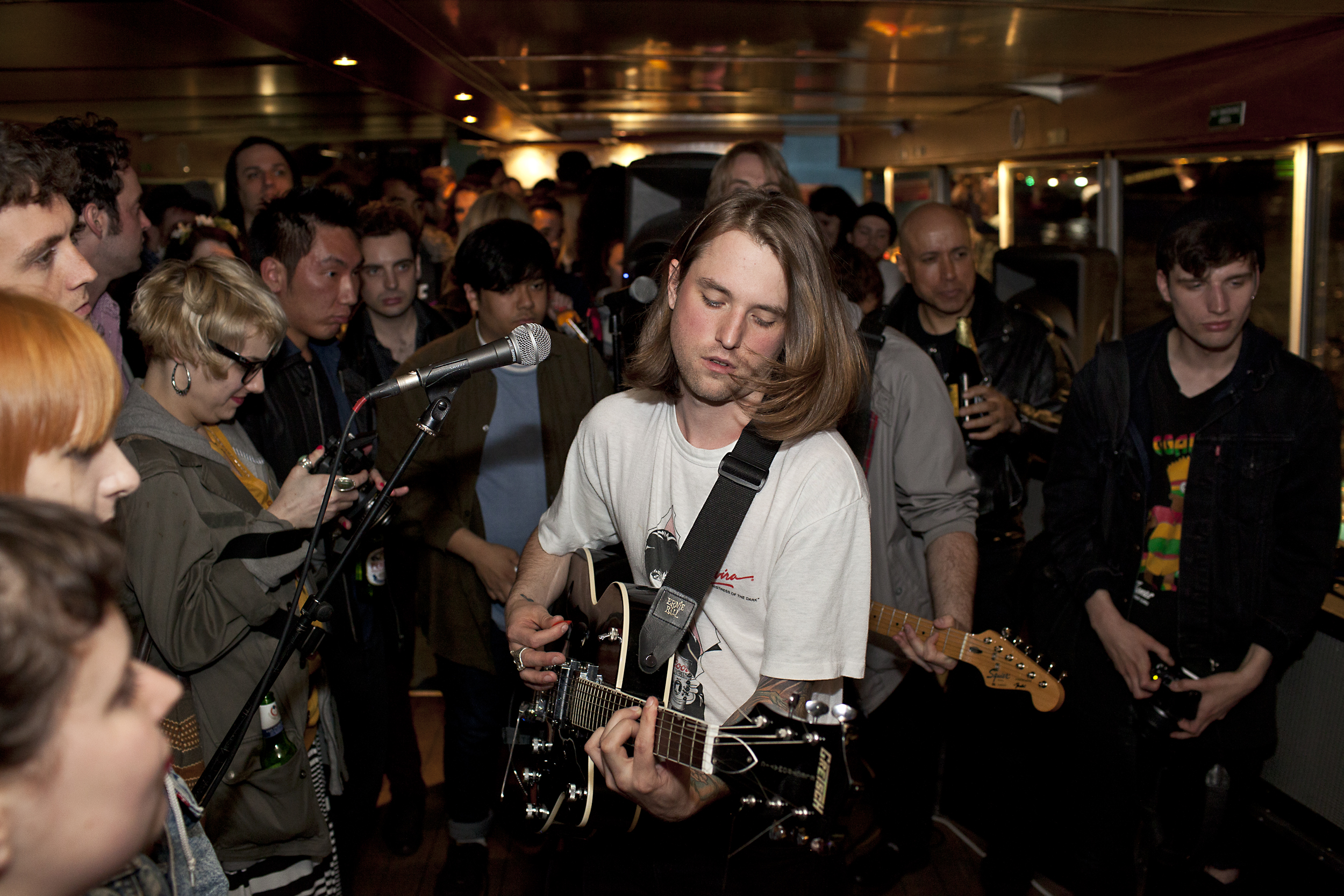 Thirty-five years to the day since Malcolm McLaren – inspired by the French Situationists – decided to launch The Sex Pistols anti-Jubilee single ‘God Save The Queen’ by sailing a boat up and down the Thames. McLaren knew the importance of creating a spectacle. With Jonny Rotten & Co. aboard a barge belting out a noise that would rile the establishment, the results were the Police ushering the “fuck you” pirates back to the land and a spectacle was created; the single topped the charts only to be erased from history almost instantly, becoming the number one that never was. Tonight, we set sail again for another alternative cruise courtesy  of San Diego band Crocodiles for the launch of their third album Endless Flowers. At Westminster pier a tattooed, pierced, leather and denim clad alternative press-gang gathered, knocking back all available sources of contraband before the crew of our weather delayed vessel could confiscate it, which set the tone for what lay ahead. Leaving land for the decks of the Royal Princess courtesy of DIY scenesters SEXBEAT, we spent five hours revelling amongst drunken hipster-sailors, but not before making sure we knew where all available life raft were situated lest this nautical adventure turned into something reminiscent of the Poseidon Adventure.

Latest Buzz-band Virals were first to take to port side; formerly of Lovvers, front-man Shaun Hencher has had a rethink, but tonight  at times it was difficult to discern just how much he has refined that sound, considering the set-up and acoustics the boat has to offer. Yet, despite a below par PA system it becomes evident just how fucking good the tunes are. So good in fact that the entire lower contingent deck has now gathered pushing the crowd ahead of them up close and personal with the band. My first encounter with Virals was just a couple of weeks ago via Soundcloud. On there, you’ll find their tune ‘Coming Up With The Sun’, which is pure electrifying power-pop heavy chords rinsed with treble and swarming with  melody.  Tonight the melodies get lost from time to time, yet when a hint of Hencher’s howl does break over the crunch it hits you in the chest, blessing the air with an infectious expression. The band look like the pub-rock revolution, the anti-prog purveyors of the 70s, as tonight Virals knock out a sound that is a clear backlash at all the progressive blipping and bleeping synth-pop is becoming, Virals are fighting back with a genuine conviction. Finishing their set, Shaun & Co. simply just walk off turning only to give a slight applause back at their grateful onlookers.

In the wake of Virals, we made our way outside to the bow of the boat to take in the glowing banks of the Thames and tobacco stained fresh air. What drew us back above deck was the arrival of Weird Dreams.

Weird Dreams have a sound that is surprisingly… erm… dream-pop. Tremolo guitars and languid vocals ooze throughout the Royal Princess. They ramp it up early on in the set, blasting through a couple of surprisingly raucous tunes, quickly prompting the captain of the vessel to cut them off and make the announcement, “too many people are jumping up and down on one side of the boat, I need you all to disperse as I’m struggling to steer us in a straight line.” A jeer flares up from the audience  room as some of the nights momentum is curtailed in the name of “Health and Safety” ( how very rock n’roll!) ; the band resumed the set but the moment has gone,  and eventually the crowd do disperse, some below deck, others to the bow. And quite possibly it was not entirely due to the previous H&S announcement either; Weird Dreams just failed to maintain their hold on the attention of the hipster-sailors with their impersonation of all things that are dreamy and poppy. 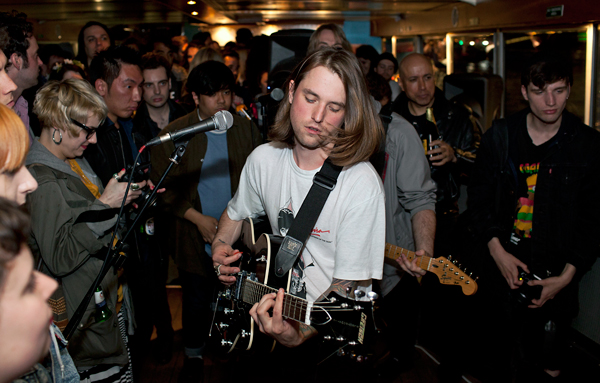 Finally, proof positive that for tonight at least , Crocodiles do indeed inhabit the Thames as Brandon Welchez and Charles Rowell arrive port side. With Bradon’s missus Dee-Dee Penny (Dum Dum Girls) in tow and a newly assembled band, the energy Crocodiles project is invigorating from the off. Screaming, howling and snorting into the microphone, Welchez attracts the entire capacity onto the upper deck instantaneously, raising the chances of capsizing to odds-on. Saved by an assault of heroic noise, fuzz-ridden guitars skimmed through the air whilst Dee-Dee Penny provided backing vocals, that although barely audible did actually provide a soft knit that allowed the sound to dart in multiple directions and hold the chaos together. A chaos that was brilliant, given the fact the previous two bands could have benefited from a kinder sound set-up, Crocodiles excel  where others are flounder ! Notably, the turbulence of tonight’s PA is what is lacking from the Endless Flowers LP, as live, Welchez and Rowell have an produce a sound that had the boat swaying and hipster pirates pogoing as the scenes aboard resembled archival footage from the Pistols’ anti-Jubilee cruise 35 years ago. The only thing sucking the rebellion out was the fact boat parties are so common on the river these days that anarchy has been replaced by conformity. Especially true as we even sang a shanty rendition of ‘Happy Birthday’ to Crocodiles keys player Robin Eisenberg –  Picking up from this cutesy moment, Crocs continue to satisfy with near perfect executions of  Endless Flowers, My Surfing Lucifer and Dark Alleys. Things really started getting crazy as the boat attempted to turn back on itself midway through the set. The continuous jumping of the crowd sent the engines into overdrive; anchors were required at one point to prevent a collision into tower bridge – not that anyone noticed – we were informed  later on by an overheated Crocs fan who had popped out on deck to bless the Thames with the contents of their stomach. Crocodiles played  as superb set, and were genuinely entertaining, phased by the chaos of excitement they were whipping up,  and even with people rammed into his face, as the nonchalantly cool  Welchez climbed above them and crooned his songs whilst simultaneously crowd surfing. Yes. That’s right. He crowd surfed inside the fucking boat, somehow managing to find space between the heads and the rafters to deliver what was possibly one of the strangest but definitely fun-filled nights of the year.