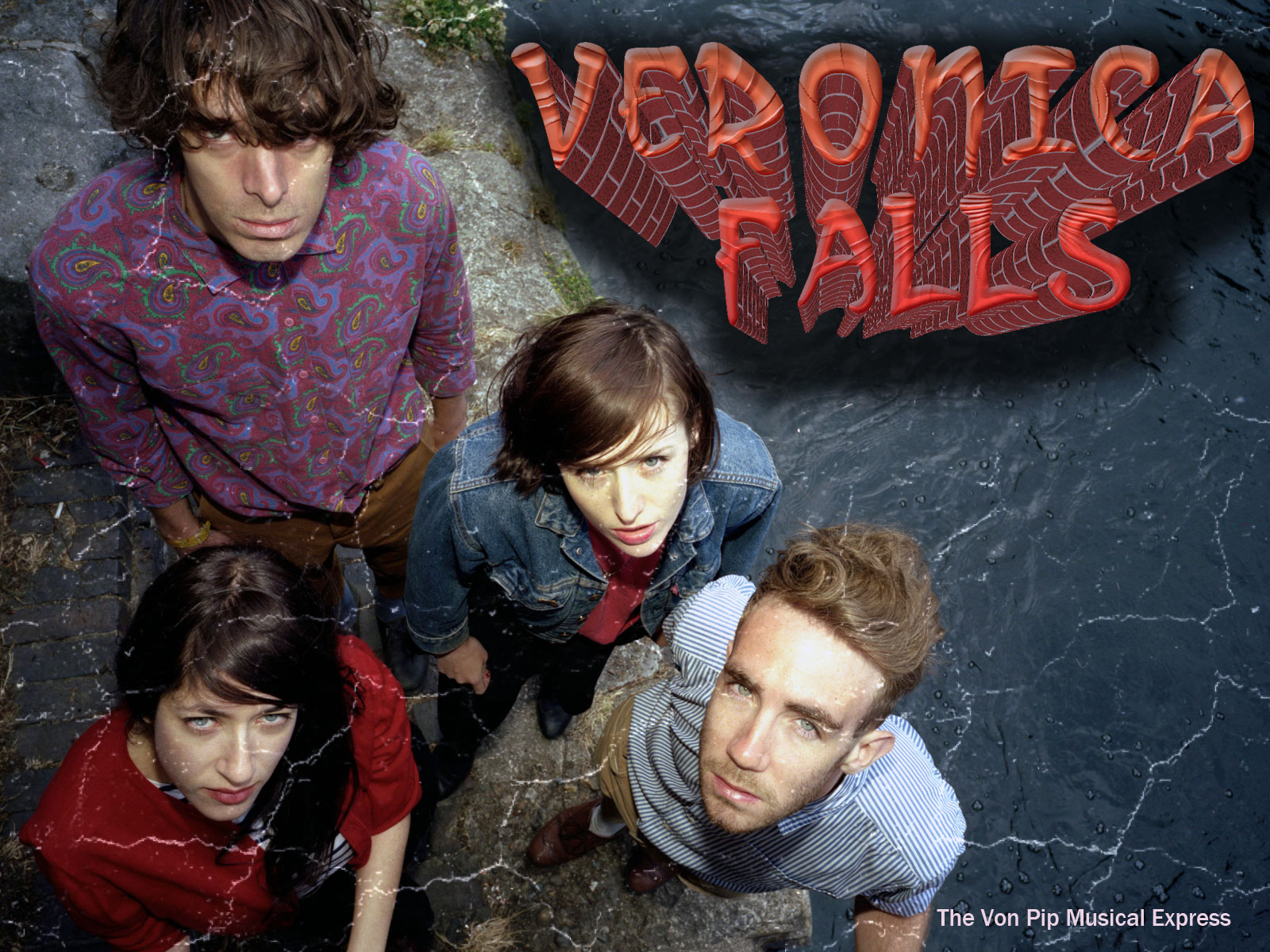 Before interviewing a band it’s always best to do a little research. For example asking Morrissey if he’s tried the succulent  new “Mc Donald’s 1955 burger” or U2’s diminutive Messiah, Bongo if he can perhaps recommend a decent firm of  Dutch accountants may be considered  something of a faux pas. Similarly whilst researching some background info on up and coming Indie Poppers Veronica Falls one thing stood out like the proverbial sore thumb,  don’t mention C86!   [I mentioned it once, but I think I got away with it!]

So let’s get this one out-of-the-way, lest it becomes the lumbering musical elephant in the room, yes there is a certain smattering of C86 goodness imbued within Veronica Falls debut album, but I’d hardly say it defined their sound. There’s also a touch of shoegaze, a splash of scratchy punk guitars amongst  joyous melodies, spooky reverb and lyrics which at times make Edgar Allan Poe seem a bit, well, Enid Blyton perhaps? Imagine if Belle and Sebastian had been influenced by The Cramps or maybe Warpaint  had produced a concept album based on the works of M.R. James, these could provide some sort of reference for a new listener, but twee ? Nah, file that description away under ‘dickhead.’

Their eponymous début album, called somewhat surprisingly, ‘Veronica Falls’ is  raw, edgy, melodious and mysterious. “Found Love In A Grave Yard” is, excuse the pun, a killer tune and has been rattling its ghostly chains about the internet for some time. It’s a perfect album opener, laying the ground work for some dark sparkling indie pop nuggets such as “Right Side Of My Brain”, “Misery” “Stephen” and “Come On Over” whilst “The Fountain” vocally conjures up  Lush’s Miki Berenyi [Hurrah!] Given some of  slightly macabre subject matter,  graveyards, loss,death and everybody’s  favourite one way destination  “Beachy Head” you may think this could be an earnest, po-faced hipster ride through angst and existentialism. You would of course be very much mistaken. Veronica Falls’ sunny pop shimmer belies the dark lyrical thematics, which you sense are sung with a knowing wink and a sense of mischievous fun. It’s an album that certainly doffs it’s cap to a certain quintessentially British form of indie, giving it a timeless,  almost Peel Session type vibe but expertly demonstrates that misery hasn’t been this much fun since Kathy Bates hobbled James Caan with a massive fucking hammer!   A delightful melancholic indie gem.

And we spoke to Patrick from the band  whilst they were on tour in the U.S. ( no expense spared here at the VPME you see and wow what a flight!  ;) )

VP:  Hello, congrats on your début album, was it fun to record and when you heard it, played back for the first time and had the physical product in your hand  how did it feel ?

PATRICK: When I first listened to the masters of the album I was really happy. It felt like we’d managed to successfully document the band up until this point, which I guess is exactly what an album is supposed to be.

VP: Beneath the seemingly upbeat melodies there’s a lot of darkness which verges on the macabre.  But dare I ask where do you get your ideas for the songs, are you dark troubled souls?

PATRICK: Roxanne writes the majority of the lyrics from the album, so you’d have to ask her really. But we’re not depressed or gloomy really – I think we just have a rather dark sense of humour. A lot of the lyrics are to be taken with a pinch of salt…

VP: Does it bother you that some critics keep bringing up the whole rose-tinted C86 thing when describing your music? I did get a slight hint of The Shop Assistants , but do you find comparisons can help people relate to your music, or do they became an irritant ?

PATRICK: Obviously people need to make comparisons as it’s an easy way for people to get an idea of what a band sounds like before they listen to the record, but I think the thing some people are missing is the fact that all those C86 bands were influenced by 60s girl groups and Phil Spector’s Wall of Sound productions. Which is probably an influence more closer to our hearts.

VP: You’re about to tour with Dum Dum Girls, which sounds like a match made in heaven, given your musical styles and influences. How does it work when bands tour together? Do they approach you; is it a management thing, what’s the score?

PATRICK: It differs, but we’ve played with Dum Dum Girls before and we get on well, so I guess when you’re going on tour with another band, it makes sense to go with a band that you already know you get on with. Those girls are really fun, I can’t wait to hang out.

VP: You’ve also toured with The Pastels, Teenage Fan Club and Belle and Sebastian, did touring with such well established bands give you any insights into how to things work or how to achieve longevity as a band ?

PATRICK: It’s funny to see how bands function at that level. I can’t ever imagine having such as big a team as Belle and Sebastian have, but it’s nice that they have a real family feel about the people they work with. I think Teenage Fanclub have had the same tour manager for years and years, which is really cool.

VP: Is it true that you re-recorded the album in just a few days to get a rawer sound?  Was the first version not a true representation of the band’s sound?

PATRICK: Yeah, the first version album didn’t really sit well with us. It was a way too clean and sterile sounding, which worked for a few of the songs – but the majority of the album we re-recorded again with all of us in one room for more of a garagey sound. I’m glad we recorded it again; we learned a lot about how best to record ourselves.

VP: What have been your best experiences as a band so far?

PATRICK: Travelling is the best. I hadn’t really travelled much, then this year I think I’ve been to more cities than I’ve been in my whole life. You also get to meet really amazing people along the way and feel welcome wherever you are in the world. I love it.

VP: If I came back in a years’ time and had a chat what do you think you would have liked to achieve?

PATRICK: Shoulder length hair and maybe a nice collection of cool stuff from around the world.

VP:  Imagine you were given a tour budget in which the only limit was your imagination , what would you add to the Veronica Falls live experience ?  Dancers? Flame throwers ? :)

VP :Five words to sum up your debut album would be ……