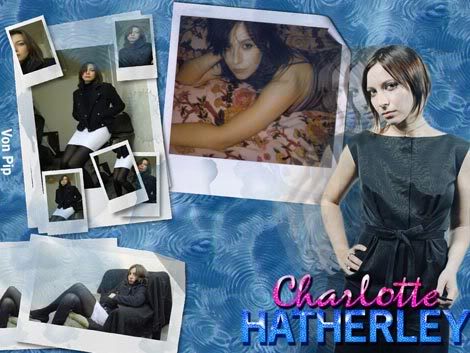 It’s a obviously a big decision for anybody to leave a successful group at the height of their fame, but it is said that music is the purest form of self expression and many artists feel the need to branch out away from their band mates and tread a different path. In the case of Charlotte Hatherley its certainly a decision that’s paid off. With two critically acclaimed albums behind her, an army of loyal fans, and her own record label she doesn’t appear to have broken stride since quitting as Ash’s guitarist in January 2006. She oozes pure rock n roll coolness, think Chrisse Hynde with supermodel looks, and your in the right ballpark, but with Charlotte it’s all about the music and the performance and she’s down to earth enough to write in her own myspace tour blogs about the dangers of eating curries before performing on stage ! Whilst Songs like “Kim Wilde” and “Bastardo” have earned her a cult following her latest album “The Deep Blue” will only enhance her reputation and new single “Again”, could well be her finest song to date, a tale of love regret and maybe the heart ruling the head? It’s a song which clearly demonstrates that Chazza has developed into a truly great songwriter, and “The Deep Blue” contains of collection of songs which any artist would be proud of.

We said “Guten Tag!” to Charlotte as her UK acoustic tour ended and her live dates in Germany where about to commence.

VP: Since leaving Ash you’ ve released two solo albums, received critical acclaim, gigged tirelessly and gathered a loyal army of fans. You must be delighted, how different does life as a solo artist differ from that of being a member of a band?

CH:I suppose it’s the difference between being a front-person and being a guitarist….i see myself mainly as a guitarist and playing in a band is just great fun, I never really have to worry about image or being sober. With Ash I would wear whatever felt comfortable and merrily get drunk on stage. Being a solo artist is a bit more serious and more thought goes into it. You have to present yourself in a much more assertive and convincing way, and I feel I have to always be on form. But I try to make the band I have with me as a solo artist feel like a band of friends, rather than just hired hands, so it’s still a lot of fun on the road.

VP ….And you’ve recently done an acoustic tour , what was the thinking behind this ? I’ve noticed quite a few bands recently whom seem keen to play more intimate gigs …

CH:Anyone can be a musician with a laptop and garage band, so the actual theatricality of a intimate stage show is becoming quite rare and I’ve been amazed by how much people prefer to see the acoustic shows, and really love to see up close the three of us playing quite intricate and delicate songs. Initially I was quite reluctant because I didn’t want it to be a boring ‘girls with acoustic guitars’ show, if I saw that advertised I would certainly be put off. I’ve made sure that it still remains interesting and exciting, despite being very stripped down.

VP: Songwriting ? would you consider your style observational, personal, poetically abstract ?? what’s the process , is it spontaneous or do you sit down and think “Ok I’m going to write two great songs today”

CH:I don’t think about my songwriting in any way, it happens and I record at home. Mostly it starts with a guitar riff, and usually the lyrics are the last thing that I write. Anything in between is a guess, it changes often. Some days there is a very definite drought, other days I can be very prolific. I am a dreadful procrastinater, I wish I could be more disciplined.

VP: Since of birth of what is referred to as ” rock n roll” what do you personally consider to be the most inspirational period/decade?

CH: I think music now is incredibly exciting and inspirational. Of course I am a huge fan of Bowie, Roxy Music, Kate Bush and Eno…so I guess the 70s really do it for me, but to experience this dramatic change in the music industry first hand, right now is very inspiring. So much is happening it’s hard to keep up. As everyone around loses their heads certain bands are seizing the moment and adapting to the climate and some seriously exciting times and music are ahead of us. It’s hard for me remain a completely independent artist as it’s virtually impossible to make any money from record sales, but I’m finding ways of surviving, and all these great and innovative new bands will too, so I am sure this era will be looked upon as very important in the future.

VP: What music are you listening to at the moment , and who are your all time musical heroes?

CH:I love the Battles album ‘Atlas’, it is incredible. I also love The Klaxons, and have been listening to a lot of classical music, Bernstein, Koechlin, Debussy and Morton Feldman. All time heroes would have to be Bowie and Kate Bush.

VP: Do you think there is a dearth of decent music shows on TV nowadays .In the past there were old established shows such as Ready Steady Go, Top Of The Pops., then more innovative shows such as The Old Grey Whistle Test , Revolver, The Tube and of course Cheggars Plays Pop ? Do you feel there’s still a niche in the market for a really great music show ( we Still have Jools Of Course)

CH: Jools Holland is hideous , although you occasionally get the odd interesting band and they really stand out as different and exciting. I guess YouTube has become a breeding ground for music videos and live performances. Touring is becoming so important for bands as people aren’t buying records anymore, so perhaps TV live performances are more important than ever as bands need people to go and see them…and lord knows there are so many fucking bands touring that you never know who to see. I bought the Battles album after seeing them on Jools Holland, and that stuff will never be played on the radio, so a whole programme full of bands like that would be really ace.

VP: When you look back at 2007 what do you think your highlights will be ?

CH: Releasing ‘The Deep Blue’ on my own label and getting through the year

VP: There seems to be quite a number of bands reforming recently. influential legends like The JAMC but also a clutch of what I can only term as “the less than leading lights of Brit pop brigade” . Even the Pistols are playing 50 quid a ticket shows. Are there any bands that you wish would reform and any you really wish hadn’t bothered?

CH: No, I don’t like any of the Britpop bands, except for The Bluetones. I don’t quite see the point in Britpop reformations, it wasn’t even that bloody long ago.

VP: There’s no denying you give off an aura of proper rock n roll cool, often people who are cool deny it, what do you think ? are you cool? .

CH:I’m from Chiswick, and that ain’t ever gonna be cool. (Denial = she’s cool! )

VP: That Bono fellows a funny wee man , clearly desperate for a Nobel peace prize or canonisation. But who do you consider to be real heroes of this confusing modern age in which we live …

CH: Alan McGee and all who follow his example in this VERY confusing modern age of the music business. He has a total belief in bands and music and is ready to change and adapt and dares to try new ways to make music available, whilst still protecting the bands that make it.

0 thoughts on ““Deep Blue Something” The Charlotte Hatherley Interview”